Off the beaten track

This blog has published many photographs of so-called MRAP (Mine Resistant Ambush Protected) vehicles, most of which have been in urban settings.

Here, however, we have a remarkable photograph, showing vehicles from Company B, 391st Combat Engineer Battalion, on a route clearance patrol over rugged terrain near Naka, Afghanistan, in support of Task Force Fury, 2006.

In the photograph, a Husky mine detection vehicle is in the lead, as it is in all patrols, followed by an RG-31 – which has the capability to survive any mines that the Husky misses. Only then do we see a HUMVEE. Strapped on the back, incidentally, is a spare mine sensor for the Husky.

No one is going to pretend that this sort of rig is going to prevent all mine incidents, but the photograph does illustrate a useful off-road capability for mine detection teams, and again suggests that US forces are taking the mine threat seriously.

On the other hand, in the absence of any such capability observed in the British Army, we remain to be convinced that the threat is being taken seriously by the British. 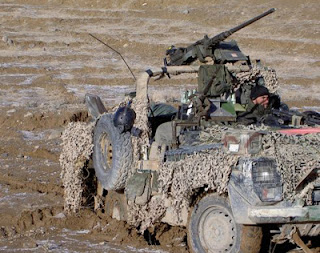 Here, we see the continued emphasis on "speed and mobility", with WIMIKs and Pinzgauers very much in favour. Of course, even that fails sometimes, witness the second photographm showing a French P4 light utility vehicle – hopelessly bogged down.

This does not prove anything in particular, other than the fact that even light vehicles can get stuck in very muddy terrain. But it does serve to illustrate that all equipment has its limitations. The other limitation of the light vehicle is that it is highly vulnerable to mine strikes.

At the one level, a bogged-down vehicle can be towed out, or abandoned, with no one hurt. But when a mine strikes, people die. It seems strange that the Army seems to be able to deal with the former, but not the latter.