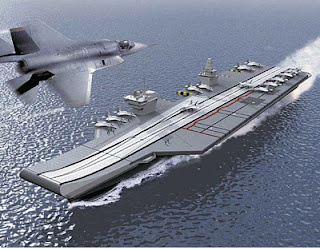 Some agencies and other sources, including DefenseNews, are reporting that the MoD is considering delaying the Royal Navy’s £3.9 billion carrier programme for up to 18 months or longer.

The Press Association on the other hand is reporting, "Green light for Navy carriers plan" saying that the Royal Navy's two new aircraft carriers will go ahead as planned "despite a delay in signing the contract". This is according to an official MoD release that says there has been a "slight delay" while the joint venture between BAE Systems and the VT Group, which will build the ships, was established as a legal entity.

Speculation nevertheless remains rife that the project is being held back, to "help plug a yawning hole in the defence budget", an assertion made by DefenseNews, suggesting that partners in the BAE Systems-led alliance “have been asked to look at ways of adjusting the spending profile on the program to help overcome cash shortages at the MoD over the next three years.”

Quoting an unnamed industry source, the journal says that, "One option being considered is continuing the design work but delaying cutting metal by 12 months. Another is to freeze the program entirely for 18 months." That same source adds that, "The former would just be tenable, but the latter would likely kill the programme". Another source, however, is indicating that the programme could be delayed by as much as five years.

This speculation adds fuel to the more general claims that the MoD is running seriously short of money and that one or other of its major projects are to be cancelled or heavily trimmed back.

However, what lends credence to suspicions that something is going on, beyond mere juggling with cash-flow is an earlier report in The Financial Times which notes that "higher depreciation and impairment charges on equipment" as a result of their heavy use in Iraq and Afghanistan is heavily eroding the disposable MoD budget, leaving it with only 0.9 percent real increases for day-to-day expenditure, rather than the headline 1.5 percent.

However, as one would expect, damage limitation – if that is what it is – is in full swing with "people close to the [carrier] talks" stressing that discussions were "part of the MoD's wider review of its equipment programme" and that no final decision had been made.

However, given the political sensitivity of the carrier issue, and the fact that the Royal Navy has staked so much on getting these two ships, the favourite for a cutback still looks like being FRES, which seems to have disappeared from sight altogether. Politically, it may be easier to cut this low-profile project, replacing it with some immediate high-visibility armoured vehicle projects, than it will be to take the Royal Navy head on.

What this current round of speculation might indicate though, is that the MoD has seriously underestimated the effect of wear and tear on its current inventory and is having to find large amounts of cash simply to keep equipment operational.

The lack of a specific programme contrasts strongly with the US Reset programme costed at estimated $13 billion, aimed at restoring and upgrading their own equipment.

It will be ironic if the need for maintaining existing equipment forces the MoD to delay its high profile projects, with the carriers held back to allow current forces to continue operating.

But then, with the projected in-service already set back to 2014 and 2016 - two years later than was originally envisaged – this may be a problem for a government of a completely different colour, so the temptation to delay spending now might seem extremely attractive.