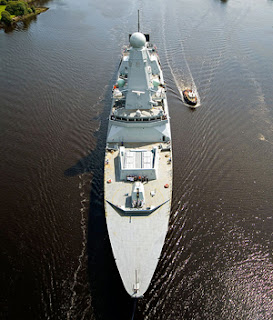 You can sympathise sometimes with journalists who have to work to extremely short deadlines, yet have to digest and then summarise lengthy reports in order to produce something newsworthy. We have been told by some of them how they envy the freedom of the blogs to publish what they want in their own timescale, without editorial input or space restrictions.

An example of that comes with the Defence Committee Report on the MoD’s annual report and accounts for 2006–07. In the media, on the day, the common theme, expressed by The Guardian and others was that, "Ministers will have to make large cuts in the defence programme at a time when the armed forces are already coming under unacceptable pressure because of operations in Iraq and Afghanistan."

This was a sentiment repeated by the authoritative Janes Defence Review, which noted that the defence select committee had warned of impending defence cuts and was "deeply concerned" that continued operations in Iraq and Afghanistan were eroding the UK armed forces' ability to react to any new contingent operations.

Also of very great interest was the news that costs for two of the major procurement projects, the Astute nuclear submarine and Type 45 destroyer had increased dramatically, "which could have an impact on future procurement." The four Astute submarines will now cost £3.79 billion against an initial budget of £2.58 billion, a 47 percent increase and the six Daring-class destroyers (HMS Daring pictured) will cost £6.46 billion compared with an initial estimate of £5.47 billion, an increase of 18 percent.

That, incidentally, brings the Type 45s back into the billion pound class, something which was forecast way back in August 2005.

With our more leisured perspective, and the benefit of reading the cuts, however, we can see writ large is the very issue about which we have been writing for some time, the tension between the demands for funding "current operations" and the "future war".

That cuts are on their way has been very evident for some time now so, in fact, the defence committee is saying nothing new.

Nevertheless, the coverage has continued, culminating in a piece today in The Daily Telegraph telling us that the MoD was "living in cloud-cuckoo-land" in believing it could achieve all its major procurement projects. This was from the chairman of the defence committee, who had declared that the military was forced to concede it "did not know" whether cash would be available for major projects.

Defence analysts, we were told, believe the MoD is facing a £3 billion shortfall out of £19 billion in funding for hardware vital to ensuring Britain's global position at the "top table".

This, in fact, represents a rearguard action of the "futurists" in a debate, of which we remarked nearly four months ago, that MPs seemed to be completely unaware.

Interestingly, with our more leisured perspective – giving time to read the whole of the current select committee report instead of just the press handouts, we see a remarkable confirmation that the "futurists" are indeed on the back foot, and that a new realism is gripping the MoD.

That confirmation came from Bill Jeffrey, the permanent under secretary of state for the MoD who told the committee that the MoD was looking at the whole spending programme and "identifying both areas where either it will be inevitable that we spend more or would like to spend more… we are identifying, if there were to be cuts… what might the options be for doing so."

But what leapt from the page was Jeffrey's comments on the specific issue of the equipment programme, when he told the committee that:

…our ministers would very much like a programme which is, if anything, more focused on the kinds of equipment requirements that come out of current operations like protected vehicles, helicopters et cetera. It would be extremely surprising if the process we are going through did not lead to a consideration of that.

Asked then whether the advice to ministers would specify which equipment programmes should be cut, Jeffrey said that, "my guess is that we will have to make some quite difficult decisions".

In due course those "difficult decisions" will be made and there will be the ritual hue and cry over them, especially from the Opposition benches. But there will be little weeping from this blog. A tighter focus on current operations and less emphasis on spending for a "future war", can only be applauded.