That's politics for you 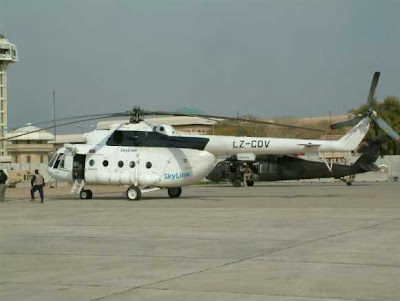 One of the most bizarre aspects of the war in Afghanistan is that, despite almost universal agreement that more helicopters are needed in theatre, the British government seems entirely unable to fill this urgent capacity shortfall.

Not so the Canadian government which, faced with a similar shortfall, is doing something about the problem, as with other aspects of its procurement policy – purchasing RG-31s when the British were patrolling in lightly armoured WIMIKs and "Snatch" Land Rovers and providing mine clearance sets, including the Husky and Buffalo, when the British were investing in hand-held mine detectors.

Their response was actually announced in July by our own defence secretary, the details recorded on this blog, including – as was then stated – purchasing six additional Chinooks and eight Griffin helicopters. In the interim, we were told, while fitting out those Chinooks for deployment, the Canadians were to lease eight Mi-17s (aka Mi-8MTV).

There were some queries about the details and it seems that the Griffins, far from being newly purchased, were to be upgraded from the existing military inventory. And neither, it seems, is the Canadian government to lease eight Mi-17s. But, if that is the bad news, the good news is that it is still leasing Mi-17s, although the number is to be six.

This we glean from the Canadian Press website, its story headed, "Canadians to use civilian helicopters in Afghanistan in stopgap measure".

Until they get their own helicopters next year, the report reads, Canadian troops in Afghanistan will have access to six civilian choppers to lessen the risk of coming under insurgent attack while moving along the country's notoriously dangerous roads. The Mi-8 helicopters are being contracted from Toronto-based SkyLink as a stopgap measure. The first flight of the aircraft took place at Kandahar Airfield on Monday.

Says Col. Christopher Coates, air wing commander of Joint Task Force Afghanistan: "As a task force, it allows us to transport with the Mi-8's cargo and with the Chinook's personnel, with a view to try and get Canadians off the roads here in Afghanistan where they are exposed to all the dangers of this country - ambushes and IEDs and the other things that all Canadians are aware of."

The decision to contract the Mi-8s, which will be flown by civilian pilots, is the result of a recommendation from the Manley report last spring, officially entitled the "Independent Panel on Canada's Future Role in Afghanistan". This recommended that Canada should have some air capabilities for its operations in Afghanistan. In particular, during its investigations, it heard that:

… the safety and effectiveness of Canadian Forces in Kandahar would be markedly increased by the acquisition and deployment of new equipment. In particular, added helicopter airlift capacity and advanced unmanned aerial surveillance vehicles are needed now. No equipment can perfectly protect Canadian soldiers against improvised explosive devices. But helicopters can save lives by reducing reliance on transporting troops by road, and aerial surveillance can more effectively track insurgent movements.

So seriously did the Panel take this evidence that, in its report, it also recommended that, "if the necessary equipment is not procured, the Government should give appropriate notice to the Afghan and allied governments of its intention to transfer responsibility for security in Kandahar."

In other words, it was saying to the government, either pull the troops out of Afghanistan or provide more helicopters. It was as blunt as that and, in the face of strong public pressure to withdraw, the government knew it had to do one or the other. It chose the latter.

The British government could, of course, have done the same and the option of leasing Mi-8 aircraft has been available since before British troops first deployed in Afghanistan, at a fraction of the cost of operating military helicopters.

This we have rehearsed many times on this blog, for instance, here, here and here. But, to be fair to the government, while it has in certain quarters energetically pursued this idea, it has been totally frustrated by a total lack of enthusiasm from the military, a wall of indifference verging on hostility from the media, and the overt opposition from the Conservative defence team.

The biggest concern is the possibility of the loss of one of these helicopters packed with troops. Indeed, one SkyLink Mi-8 was shot down in Afghanistan in 21 April 2005, with the loss of 11 lives, so the fear is very real. The bigger political problem, though, would be the ensuing outcry from the media – and opposition – charging that "Our Boys" had been palmed off with "substandard" Russian helicopters, which had led to their death. You can just imagine The Sun in full flow on this, complete with "outraged" comments from the Tory defence team.

However, instead of sitting on their backsides whining about the lack of helicopters, the ever resourceful Canadians have come up with a solution to this problem.

They are going to pool these helicopters under the Joint Task Force Afghanistan command. Thus, when they need to move troops, they will be able to call upon fully equipped British Chinooks, in return for which they will transport British cargo which would otherwise have been moved by the RAF aircraft.

Given that the British forces have a massive requirement for moving cargo – and sometimes we see precious Chinooks used just for delivering the mail – there was and never has been any reason why we could not have acquired Mi-8s for cargo moving. Not only is this option safer, it acts as a force multiplier reducing the need for expensive and manpower intensive resupply convoys.

Of course, this issue is not about politics, in the minds of the chatterati except when it suits them to complain about under-resourcing but, in fact, this is the very meat and drink of politics.

Had the opposition put its weight behind this issue, I have very good reasons for believing that we would have been seeing Mi-8s in the British sector some long time ago, saving money and possibly lives, as well as significantly enhancing our capabilities.

But then, they have some many other important things to do, like trying to get the ridiculously expensive and generally inadequate Future Lynx in service earlier, pushing complaints about “delays” into the media. It ain’t going to happen but, despite assertions by a certain MP, there are other games in town which will help resolve – albeit less than satisfactorily – the tactical helicopter shortage in Afghanistan.

The solution will be found, but without the intervention of the opposition. But, if we can't get rid – in the longer term – of this overpriced white elephant – at least, it seems, FRES is going to be allowed to wither on the vine. What a tale there is to tell there – the battle of FRES, that the chatterati didn't even realise was happening.

Funny that - the most interesting stories never appear in the papers. And that, dear reader, is politics for you!