The name of the game 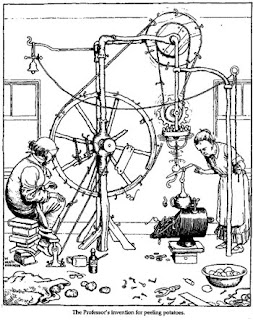 A correspondent observes that, in his commuting days, when travelling up to London by train on Monday mornings and back on Friday afternoon/evening, he was amazed at the number of military officers doing likewise. They were attending the MoD for defence procurement exercises that ended up years late and miles over budget. There were sufficient of these guys to have manned another war.

This completely misses the point. The purpose of procurement is not actually to buy anything - Heavens forbid. It is a form of outdoor relief for superannuated and otherwise unemployable Colonels, and a mechanism for keeping large numbers of Civil Servants occupied.

Actually acquiring equipment spoils the game - not only is there no more "work" to do, the Services actually get their mits on it and start complaining about how rubbish it is. Then the media and MPs get stuck in and life gets very uncomfortable.

If, however, the job is done really badly, this can be of advantage. A new project team can be set up to procure a replacement and the whole game can start over. This usually has to wait for a change in government - or a new Secretary of State - as existing governments/ministers are loath to admit they have been had.

Therefore, the most skilful players ensure that a project is cancelled just before it gets to the stage where any equipment actually has to be produced. Then a new project can be set up, only for that one to be cancelled as well. This can be kept going for decades without ever having to deliver anything.

This is, of course, why the MoD hates wars. Soldiers then develop quite unreasonable expectations of wanting kit with which they can actually fight. Wholly irrationally, they even expect it to work.

Furthermore, the enemy, not having read the ministerial briefs extolling the virtues of the kit that escapes the system and gets delivered, tends to trash it rather quickly, again inviting awkward questions from the media and MPs.

This can be overcome by avoiding real wars and inventing imaginary enemies in some imaginary theatre in some future war, which never actually comes. This allows the establishment of endless planning committees to devise new and increasingly expensive equipment with which to defeat them.

Any "enemy" so devised always exactly conforms with expectations, to which effect the imaginary equipment devised to defeat it always performs superbly, thus keeping everybody happy and gainfully employed.