Lost before it started - Part 1

For nearly five years now, we have been following the serpentine twists and turns of defence politics, initially charting the UK's progress towards European defence integration, with a very strong interest in equipment and procurement matters, and then, inceasingly, the progress of the wars in Iraq and Afghanistan.

In a way we could not even have begun to imagine when we started, all these issues are intimately related. Drawing all the separate threads together, however, has been a complex and time-consuming affair. Only now that we have done so are we able to tell the story of how the first two led inexorably and inevitably to the defeat of the British Army in Iraq.

In a seven-part analysis - which we will post over this and the next six days - we will tell the story as it unfolded, starting with the political machinations which set off the process. 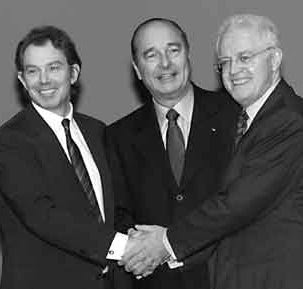 The Army may have been defeated in Iraq. Yet the battle was actually lost in St Malo, France, and in Whitehall, specifically, in the portals of the MoD. It was lost before it had even started.

There were many reasons why the Army could have lost the counter-insurgency war, not least because of the tardy recognition of the fact of an organised Shi'a insurgency. But one of the main reasons was the Army's failure to re-equip, in order to deal with the weapons and tactics of the principal enemy in Iraq, the Mahdi Army. But, in seeking to re-equip, the Army had two more dangerous enemies: Tony Blair and its own High Command.

The shadow of Europe

Tony Blair did for the Army 1998, ten years before its final defeat in Basra. It was then that he met Jacques Chirac, then French President, in St Malo, France, for a summit on defence co-operation. It was there – and in Helsinki the following year – that Blair pledged to work towards building a European Rapid Reaction Force (ERRF).

This was to be a Europe-wide force of 15 Brigades or about 50,000-60,000 troops, capable of intervening rapidly in a crisis. It was to be deployable within 60 days at a distance of 2,500 miles and sustainable in the field for a year. In order to maintain such a force, with rotating replacements, the actual manpower requirement was closer to 180,000. In addition, there would need to be home-based supporting elements and logistic support.

The potential British contribution included up to 12,500 troops, 72 combat aircraft and 18 warships, with a full range of supporting capabilities. Blair was in effect committing the bulk of the UK's long-term deployable forces to the venture – considerably more than he was to commit to the occupation of Iraq.

The immediate effect was to usher in an obvious but undeclared – and frequently denied – policy of "Europe first" in procurement issues, all aimed at securing the harmonisation and "inter-operability" of European forces. Through that, billions of pounds was wasted on European-sourced equipment which could have been obtained better and more cheaply elsewhere.

This was to cast a shadow over the defence budget, focusing procurement on high value projects which soaked up funds and reduced the ability of the MoD to respond to changing circumstances. Its main political priority became to equip the British component of the ERRF.

The effect on the Army

For the Army, the effect was dramatic. The ERRF embodied what was called the "expeditionary" concept, but with a difference. Because of the requirement for speed of deployment over distance, it needed a highly mobile, air-portable armoured force. This was a capability which the British Army completely lacked.

Yet those same vehicles, once deployed, might be expected to confront main battle tanks three times their weight, with far thicker armour, and defeat them. To square the circle, an entirely new military concept emerged. This was not a vehicle as such, but a system. Actually, it was even more than that. It was a "system of systems." In British military circles, it became known as the Future Rapid Effects System or FRES.

FRES was a break from the established principles of relying on armoured vehicles which themselves relied on a compromise between protection, mobility and firepower. It added a fourth dimension – "situational awareness", the new religion in military thinking. This would be achieved by flooding the battlefield with advanced electronic and other sensors, including those fitted to a new generation of vehicles.

They would all be linked together by a vast electronic communications network – the military equivalent of the internet. It would allow commanders right down to the level of a four-man patrol to have a perfect overview of the battlefield. Instantaneous communication with all other units would be possible, allowing sharing of information and enabling the co-ordination of actions. In theory, the enemy could then be detected at a distance.

At that point, the final element came into play – an array of precision-guided, stand-off weapons which could be used to neutralise hostile forces before they came close enough to inflict damage to the lightly protected vehicles deployed.

This became the Holy Grail, the search for which was shared by most other Western armies and by US forces which were working on their own version called the Future Combat System (FCS).

Such ventures were of course welcomed by the military-industrial complex. It saw in the various projects opportunities for lucrative development and production contracts. There was also another dividend anticipated. The technology was seen as a "force multiplier", allowing the "effects" to be achieved with a vastly smaller number of men. It reduced the cost of maintaining large standing armies and the difficulties most nations were experiencing in recruiting enough personnel for their largely volunteer forces.

Absent entirely from the UK's Strategic Review of 1998, FRES was nevertheless enthusiastically embraced by the former Member of the European Parliament Geoff Hoon. In October 1999, he had been appointed Secretary of State for Defence. Despite that, no immediate progress was made. Attention was consumed by 11 September 2001 and the attacks on the World Trade Centre and the events afterwards. These culminated in the invasion of Afghanistan on 7 October 2001 and the invasion of Iraq on 20 March 2003.

In May 2004, though, even as British forces in Iraq were about to confront the Mahdi Army uprising, the European Union's General Affairs and External Relations Council was kick-starting the ERRF. It delivered what were known as the "Headline Goals 2010". These were subsequently endorsed by the European Council of 17 and 18 June 2004. They were both a "shopping list" of equipment required to fill capability gaps and a deadline set for the completion of the ERRF, the member states undertaking to be ready by 2010 to carry out "military rapid response operations".

In anticipation of meeting the UK commitment, there had already emerged in the Defence White Paper of July 2003 completely new plans for "a major restructuring of the Army". There would be a "shift in emphasis to light and medium weight forces" based around the Future Rapid Effects System (FRES) family of vehicles. Three brigades would be equipped.

This was the British element of the ERRF, introduced at the very time when the Army, only in the first months of its occupation of Iraq, needed to keep its options open. Instead, it was committing its intellectual, planning and financial resources to a "major restructuring" involving an entirely new and untried system. With such a huge commitment, restructuring to meet the demands of a counter-insurgency campaign was not only inconceivable. It was beyond the financial resources of the Army and its organisational capabilities.