Lost before it started – Part 2

In Part 1, we saw how in 1998 and the following year, Tony Blair agreed to commit the bulk of the UK's deployable Armed Forces to the European Rapid Response Force (ERRF) – 12,500 personnel plus ships and aircraft and supporting elements. This in turn led to the 2003 Defence White Paper in which the Government announced a "major restructuring" of the Army, with a shift in emphasis from light to medium Brigades, based around based around the Future Rapid Effects System (FRES) family of vehicles. This was to be Britain's contribution to the ERRF.

At a time when very time when the Army was only in the first months of its occupation of Iraq, it needed to keep its options open. Instead, it was committing its intellectual, planning and financial resources to introducing an entirely new and untried system, one which had no relevance to counter-insurgency operations. In this second part, we look at how the Army reacted and, in particular, the response of the then newly appointed Chief of the General Staff, General Sir Mike Jackson. 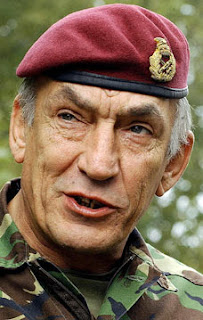 Whether the military could have resisted the ERRF is debatable. Certainly, the political pressure for delivery was very strong. Relations between the UK and most of the rest of her EU "partners" had been seriously strained in the run-up to the invasion of Iraq. Post-invasion, not only did Blair want to re-build bridges, he needed European Union support for a UN mandate to endorse the occupation. He also had hopes of member states joining the "coalition of the willing" in Iraq. Active UK participation in ERRF preparations was necessary to send a positive signal to Brussels.

However, there is no evidence that there was any strong resistance in the Army, the implementation of which became the responsibility of the newly appointed Chief of the General Staff, General Sir Mike Jackson. He was not necessarily enthusiastic about the European "project" and, in fact, warned that no army could operate properly without "clear political authority". But the idea of a "major restructuring", with the prospect of substantial funding for new equipment, was extremely attractive. An in-service date of 2009 was declared for FRES, in good time to be ready for service with the ERRF.

Whatever the political deadline, the very idea of introducing FRES in five years – or at all – was fantasy. It was not even within the remotest realms of possibility. In 2001, enthusiasts in the Defence Evaluation and Research Agency had not expected operational readiness for at least 25 years.

Much of the technology needed did not exist. No one was even sure what it was, or what its final form might be. Gregory Fetter, a senior land-warfare analyst, had observed: "It's like trying to grab a cloud of smoke." Whatever it was, there were serious doubts as to whether it was at all feasible. MP Nicholas Soames complained of defence workers who had for the past two years "been anxiously awaiting a decision from the Government [on the FRES vehicle] … for which there is not yet even a drawing."

Nevertheless, there were early clues to signal quite how important the project had become to the Army. Despite the completely unrealistic in-service date of 2009, the Army was strongly opposed to "stop-gap" solutions. This was forcibly put by Lt Gen Rob Fulton to the Commons Defence Committee in May 2004. He had been asked whether, if there going to be a delay in getting FRES, an option would be to buy something off-the-shelf for a short period to fill the capability gap. His response left no room for doubt:

This, writ large, was the real reason for the opposition to the Mastiff and any other MRAP-type vehicles when they were offered to the Army in 2006, in a bid to stem the growing toll of casualties from poorly protected Snatch Land Rovers.

Mastiffs and the like were a "stopgap" – a "dead end capability". More dangerously, they could "divert much needed funds … from FRES"”. Thereby, the Army was prepared to reject much-needed equipment to deal with a real war, in favour of a fantasy project. At least in 1915 when the Army had rejected the tank, it had done so to favour its existing capability – the cavalry. But here, the Army seemed determined to reject real equipment in favour of a fantasy, the shape and nature of which appeared to be unknown.

Even the price ticket was fantasy. Originally slated at £6 billion for 900 vehicles, in a sparsely attended Westminster Hall debate held at the end of June 2005, Ann Winterton was shocked to hear Defence Minister Don Touhig read from a prepared speech that 3,500 vehicles were planned. The cost had risen to £14 billion. After the debate, Touhig had expressed surprise – he had seen the figure for the first time while he had been reading it out. Later, the price increased to £16 billion. There does not seem to have been a formal announcement. It just appeared. One day, it was fourteen, the next £16 billion.

Jackson gets down to work

Despite this – or perhaps because of the huge price ticket - Gen Jackson set about reorganising the Army with vigour. The existing structure of the Infantry, based on what was known as the "Arms Plot", did need reform. It was wasteful, inefficient and disruptive. But Jackson's "Future Army Structure" went far beyond what was necessary.

In a space of three years, he refashioned the Army to make it conform with the FRES/ERRF concept. He set out to create a highly specialised force of mechanised infantry, in so doing discarding four infantry battalions, relying on the dividend gained from the supposedly more effective FRES formations.

He then restructured the rest of the infantry, abolishing most of the traditional regiments in the process. This led to a huge outcry about the loss of "cap badges" but never once did it impinge on the public debate that the restructuring was being carried out to enable the Army to fit the ERRF concept.

This was one of the most egregious failures of the media and the political classes. While complaining vociferously about the loss of traditional regiments, and the loss of four infantry Battalions, neither questioned the underlying assumptions and plans which were driving the changes. The ERRF - and FRES - became towering elephants in the room.

While he pursued his task of bringing FRES to fruition, there is no evidence that Gen Jackson actually understood what was involved. He would not have been the only one. But nor is there any evidence that he was concerned at all with the idea of FRES. There was a hidden agenda – the real agenda. Very quickly in Army circles, the term had morphed into the "FRES family of medium armoured vehicles" (FFMAV), which was highly revealing.

This harped back to the 1980s when the Army had been planning a range of armoured vehicles on a common chassis to replace equipment such as the wheeled Saladin APC, the tracked Scimitar reconnaissance vehicle and others. To that effect, it had unveiled as an "aspiration" in 1987 the Future Family of Light Armoured Vehicles (FFLAV). As is so often the case with defence procurement projects, this project was shelved, but not before a preferred option had been identified, the Swiss-designed Piranha, multi-role armoured personnel carrier, a platform which could be adapted to meet a variety of needs.

Some of the project's intended functions were incorporated in a 1996 joint UK/US project, called by the British "TRACER". In 2001, the British Government pulled out, losing its stake of £131 million. It then poured money into a consortium with Germany and Holland to produce the Multi Role Armoured Vehicle (MRAV), very similar in concept to the original FFLAV project.

However, in 2003, the UK also pulled out of that, with a loss of (at least) £48 million. This left the Army having spent probably more than £200 million on not replacing its medium-weight armoured capability. In FRES came the opportunity to revisit the original project. FFLAV became FFMAV. All that had changed was one letter. The Army was hankering after old dreams.

With such a glittering prize so close, after nearly 20 years of frustration and hundreds of millions in wasted expenditure, it is hardly surprising that when a need emerged in late 2003 for new equipment in Iraq, Gen Jackson should have taken an easy option. Neither willing nor able even to consider something more suitable for fear of prejudicing his treasured project, he had raided the stores in Northern Ireland and despatched surplus Snatch Land Rovers.

A "stopgap" was not good enough for the real Army - the ERRF - but it was good enough for the Army in Iraq. They could make do with 14-year-old, second-hand Land Rovers. Thus equipped, the occupation Army was to lose the war, for which 38 soldiers - in Iraq and Afghanistan were to pay for with their lives in these vulnerable vehicles, with many more injured.

Meanwhile, Jackson turned his attention back to the object of his affection, a project which to outsiders seemed so vague that "a cloud of smoke" had more substance. It was not so vague inside the Army. It was a dream about to come true. In pursuing it, Jackson, his staff - and the politicians behind him who allowed it - condemned the Army in Iraq to impotence, with all the consequences that followed.