The battle goes on 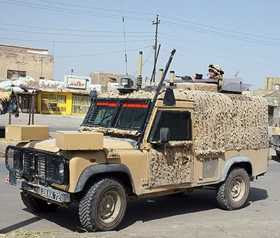 It was on 18 Jun 2006 that Booker in his column in The Sunday Telegraph first raised the media profile of the "Snatch" Land Rover, reporting:

One reason British troops continue to be killed and injured in southern Iraq is that they are expected to patrol in lightly-armoured Land Rovers which give them no protection against roadside bombs and rocket-propelled grenades. Meanwhile, their American counterparts walk away unscathed, even when their RG31 armoured patrol vehicles are hit by the same explosives. Yet the Ministry of Defence has not equipped the British Army with the RG31, even though it is built by a British-owned company.

By then, 21 British soldiers had already died and, to date another 15 have been killed, making 36 in all. And, with the vehicle still in use, it is too much to expect that this will be the last death.

That The Daily Telegraph is continuing to keep this issue alive is, therefore, to be welcomed, its latest offering being a report of yesterday's proceedings in The House of Lords.

There, Conservative defence spokesman, Lord Astor of Hever, took up the issue again of Quentin Davies, asking the minister to confirm that Major Morley had to use Snatch Land Rover on 17 June when Cpl. Sarah Bryant and her colleagues were killed.

Astor also wanted confirmation that there had been no other vehicle types available and then wanted an assurance that no commander in Afghanistan would again be forced to use Snatch for any operation beyond base perimeters.

He got neither the information he wanted from the defence minister, Baroness Taylor of Bolton, nor the assurance he asked for. Instead, the usual mantra was offered, that it was "for commanders on the ground to decide which vehicles are suitable for which operations." Taylor added that ministers had been told "more than once by operational commanders that they wish to retain the Snatch vehicle for use in certain circumstances".

The story in The Telegraph, however, focused on the subsequent intervention Viscount Slim, a former SAS officer and son of the World War II general Bill Slim. Slim complained that ministers had failed to support or equip British troops and their commanders properly, stating, "At this time what they need is not criticism. They need support, encouragement and being given the right kit for the right job. This is not happening."

In a reference to Quentin Davies, he asked: "Is it not wrong that those who have no battle experience and have never had their hair parted by a bullet to make assumptions about what happens in combat and in that way make criticisms and show distrust to our commanders in the field, who are the ones that are doing the fighting?"

There was not a great deal Taylor could do to answer that one, and she hardly tried. Nevertheless, it was rather "below the belt". Although Davies is considered odious by many – not least the entire Conservative tribe – the British tradition is for civilian control of the Armed Forces.

Hence ministers are constantly required to "make assumptions about what happens in combat" and, where appropriate, it is right and proper for them to "show distrust to our commanders in the field" – albeit that this is usually done in private.

Astor, in many ways, was more constructive, asking for the assurance about the future use of Snatches. He did not get it – but that assurance should be given. The battle goes on.