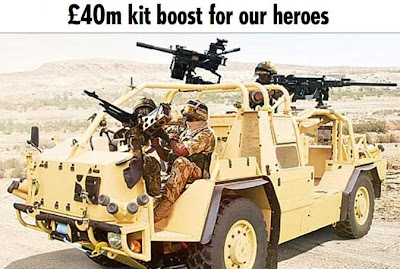 Political editor George Pascoe-Watson, of The Sun needs to talk urgently to the paper’s defence editor (or vice versa).

On 11 March of this year – to the evident approval of the newspaper, GP-W announced a "£40m kit boost for our heroes", telling us in an "exclusive" report that British soldiers in Afghanistan were to get "72 new Mad Max-style troop carriers in tomorrow's Budget".

Although the story had a picture of the early version (unarmoured) - with photoshopped grenade launcher - amd acaption, "Tough ... Supacat armoured vehicle", it seems that defence "editor" Tom Newton Dunn (don't they have reporters anymore?) does not agree.

In another "exclusive" – despite it having been reported elsewhere - TND complains, under the title "Sent to die in open-top 4x4" (and a report that shows an armoured Jackal) that "commanders had to send a Household Cavalry soldier out to die in an UNARMOURED vehicle after their ageing light tanks broke down."

This was Trooper James Munday, the first (officially reported) death in a Jackal, the event described by TND as "…the latest in a long line of shameful equipment shortfalls to plague Our Boys on the Helmand frontline." He adds: Last night a Household Cavalry officer fumed: "It is a disgrace young men are being exposed to these sorts of dangers simply because the Government isn't prepared to pay for anything better … It makes a mockery of everything we serve for" - despite, it seems, the £40 million "boost" that The Sun has previously reported.

This is also rather at odds with the eulogising from The Daily Mail in June 2007, when it gushed over the "The 80mph 'Mad Max' monster targeting the Taliban". Furthermore, it is totally at odds with the mad "puff" in The Sunday Mirror of last March, which described the Jackal as "four tons of pure killing machine".

This paper was competing with The Sunday Telegraph's Sean Rayment who was happily burbling about the "Pitbull", citing "senior officers" saying: "the vehicle will greatly enhance the fighting capability of their soldiers, and will save lives", adding: "The vehicle and crew are protected against mines by reinforced armour plating."

Well, for sure, it did not save the life of Trooper James Munday, nor those of Marines Neil Dunstan and Robert McKibben (and the unnamed Afghan soldier), the latest casualties, with the MoD admitting that they too were killed in a Jackal - something which The Daily Mail has also noted. 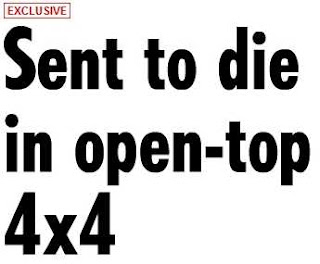 For Newton Dunn, though, the “unarmoured” truck is a poor substitute for the Scimitar, drawing this pained response from the MoD. If Newton Dunn wants another view (not that he does) he could always read this. Rather, shoehorning the facts to fit his storyline, he is more intent on offering us this tale of woe:

The elite unit's 26 Scimitar armoured reconnaissance vehicles entered service in 1971 and have suffered mechanical problems for years. But they finally packed up this summer, as almost all broke down four miles from Camp Bastion at the start of one disastrous mission.

Half the troopers from the regiment's D Squadron, Prince William’s old unit, were stuck in the base for TWO MONTHS. Barely half the Scimitars could be repaired, leaving commanders with no choice but to rapidly retrain the other half of the squadron on the new Jackal 4x4 patrol trucks.

Even the Scimitars that were fixed could only operate in early morning or evening because of the blistering Afghan summer heat. A replacement — the FRES Scout Vehicle — was drawn up years ago but is not now due in service until 2015 at best. The MoD blamed problems with the Scimitar fleet on dust and heat and said £30million had been spent on upgrades.

The reference to FRES is interesting, with TDN presumably imbibing the legend that this system was in any way going to be up to the rigours of Afghanistan.

However, this defence "editor" finishes his piece telling us that "Last week an SAS commander quit in protest after three of his soldiers died inside an unarmoured Snatch Land Rover." Thus we have an "unarmoured" Jackal and an unarmoured "Snatch Land Rover", despite both being armoured – albeit lightly.

Perhaps Newton Dunn has not caught up with the latest version of the Jackal but it is always good to see the man keeping up his high standard of reporting.

As for the Scimitar, does he really think that this type is any safer, given the fate of the Spartan recently (built on the same chassis) or of this Scimitar in Iraq?

However, given the line taken by the man on the Jackal, it would not take many more casualties in this machine for The Sun to be making the government's life very difficult indeed. When you can be so cavalier with the facts, anything goes.