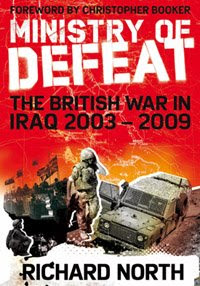 The Army is in "denial" over Iraq, claims Richard North, author of Ministry of Defeat, a startling new book published today, the first comprehensive history of the British occupation of southern Iraq.

Charting the progress of the occupation, relying on "open source" material, the extensive official and Arab media coverage, and high level sources, he finds that the military made many serious blunders which led to an irrecoverable position. This eventually forced the retreat into a single base in Basra, leaving the city and its surrounds to fundamentalist Islamic milita.

Although under-resourced and without clear political objectives, the Army nevertheless failed in early-mid 2003 to recognise the signs that a full-scale insurgency was developing. The military then treated the growing disorder around Basra and other provinces primarily as a "public order" issue, similar to that which they had faced in Northern Ireland.

This led to the fatal decision to deploy second-hand Snatch Land Rovers imported from Belfast, and the failure properly to equip for the vicious battles which were to follow.

When a full-blown insurgency developed in 2004, however, the militias mistakenly confronted the Army head on – and lost. This in turn led to a false sense of security in the Army, where military commanders believed the insurgent strength was broken.

However, the militias adopted classic guerrilla war tactics, using sophisticated bombs against which the Army, with its vulnerable Snatches, was ill prepared. The new tactics forced the Army onto the defensive, giving time for the militias to rebuild their strength.

Faced with the prospect of a long-drawn-out campaign which it was not equipped to fight, the Army decided to pull out and then made the mistake of revealing to the militias its intention to withdraw altogether. It thus gave the militias a signal that all they had to do was maintain the pressure and they would prevail.

Having lost the initiative, the two major cities of al Amarah and Basra descended into chaos, ruled by the fundamentalist militias, with the Army losing control. This led to the major strategic error in 2006 of abandoning the key city of al Amarah, which became the insurgents' bomb factory and armoury, feeding the insurgency in Basra and Baghdad. Without interference from the British, bombs were being manufactured on an industrial scale.

Against the increasingly well-equipped and aggressive militias, the Army made a last-ditch bid at the end of 2006 to regain the initiative in Basra, amid growing violence and disorder. When this failed, it adopted a policy of progressive retreat, leaving the militias in virtually complete control of the city. This culminated in the Army being permitted by the militias to beat a peaceful but ignominious retreat to the comparative safety of Basra airport.

It then took the Americans and the Iraqi government to transform the situation in southern Iraq, during which time the Iraqi Army successfully recovered first Basra and then al Amarah. During this period, through 2007, the US forces committed less than half the troop numbers than the British yet, working with Iraqi divisions, managed to defeat the militias.

Although the military were badly let down by the politicians, says North, the campaign could have been won with the resources available, had the right tactics and equipment been adopted. Contrary to popular belief, the Army was not overstretched. Rather, it failed to utilise the Iraqi Army properly and lacked the right equipment to support the campaign.

In the equipment stakes, the Army was the victim of successive procurement failures. But, relying on high level sources, North found that the Army contributed to its own problems, resisting the introduction of equipment needed to fight the insurgency because it feared that ambitious plans for future, high-tech equipment might be scrapped. It traded its capability to fight the insurgency for a promise of future capability, says North.

The Army, as a corporate body, let down men and women on the ground, who performed admirably, fighting a vicious and unprincipled enemy. They were handicapped by poor strategy, inadequate equipment and insufficient resources. Without their perseverance, their skills and in some cases quite extraordinary courage, things might have been far worse.

The sad fact though is that the Army failed. More dangerously, it is refusing to acknowledge that failure and risks making the same mistakes in Afghanistan, particularly in terms of equipment procurement, where it is clear that lessons have not been learned.

In researching the book, North visited the MoD's luxurious office block in Whitehall. Despite the vast expense on its refurbishment, he says, it boasts an atrium that has the look and feel of a public lavatory. This is not inappropriate, considering what it does with much of the public money entrusted to it, he reflects. And, while the politicians bear their share of the blame for the defeat in Iraq, the finger must also point at the Ministry of Defence, which North has renamed the Ministry of Defeat.