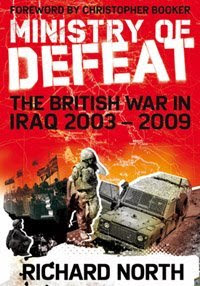 The odd thing about the American defeat – if such a word can be used – in Vietnam is that it came about through internal problems, not military defeat. The Viet Cong were beaten. The North Vietnamese Army was beaten. The bombing of North Vietnam was shockingly effective (although this was not appreciated at the time.) The US effectively won the war. It was defeated by the home front and an astonishingly effective propaganda campaign. Not for the first time, the communists probably didn’t believe their own success.

The odd thing about the British "victory" in Southern Iraq is … well, it was a defeat. Worse, it was a defeat that came about because of flawed political and military decisions, taken not by the men on the spot, but men in Whitehall. The scale of the disaster was never understood by the home front – even I didn't know the half of it, and I am as well-informed as any civilian could reasonably hope to be – due to a compliant media and a sheer lack of comprehension. The British government preferred to believe its own "spin" rather than the truth. In doing so, they betrayed the British soldiers who went to war without the right equipment and no clear plan, and the country itself. Charges of treason would not be inappropriate.

That is the conclusion, one I strongly endorse, of this remarkable book. There are actually relatively few British writings on the subject of Iraq, although Sniper One and Eight Lives Down provide some insight into the lives of the soldiers there. It should be noted that Sniper One paints a picture of Basra – and Iraq – that was at variance with the official government-promoted version of events. Ministry of Defeat provides an overall history of the occupation – something that has been sorely lacking – and details, in a very "take no prisoners" attitude, just went wrong in Iraq.

The core of the matter, North writes, is that the British Government refused to recognise that it had a serious problem on its hands. As the militias gained power in Basra, the government preferred to believe that it wasn't a serious issue – little more than a public order issue – and convinced itself that Britain's expertise from Northern Ireland gave it an advantage over the US. That might have been true if the expertise had actually been used (it wasn't) … but in any case, Basra was not Northern Ireland. This little piece of self-delusion cost lives, Mr Blair! The troops in Ireland had far better intelligence and much higher troop levels. Much has been made of the shortage of American troops after the Fall of Baghdad, but the British had the same problem and, unlike the US, the MOD learned fuck-all from the experience.

If that wasn't bad enough, the equipment procurement process was badly screwed up. When the RAF was being allowed to spend billions on the Eurofighter, the Army had to make do with the Snatch Land Rover – which Northern Ireland experience had shown was badly under-armoured – which caused the deaths of many British soldiers. The issue was not that the British Army was under-funded – although soldiers were being underpaid for their role – but that the money was being spent on long-term programs that would not provide useful equipment (if that) in time to be useful.

It is quite typical, as Donald Rumsfield pointed out years ago, that countries go to war with an army that is unprepared for the task. It is rather less typical that a country would go to war, find itself in serious shit … and then continue blithely developing technology that was effectively useless, prepared for the wrong war. Instead of fighting the last war, the UK was looking towards a hypothetical European RRF, one of Tony Blair's pet projects. Billions have been spent – for nothing. Common sense would tell someone of Blair's intelligence – surely – that a European force wasn't on the cards. When has the EU ever agreed on an enemy?

The British media also comes in for bashing. Not, it should be noted, for the largely American left-wing media army bashing, but for being the dog that didn't bark. The MOD generally tried to spoon-feed propaganda to the British TV, which largely ate it up and came back and begged for more. Early signs of trouble were ignored, or taken out of context, and even when the media did pick up on signs of trouble, they never understood the underlying factors behind the war. The media did pick up on problems with the Snatch vehicles, but took the "under-funded military" line rather than realising the truth. Reporters who questioned the Army line, such as Christina Lamb in Afghanistan, found themselves blacklisted.

The core reason for British "success" in Iraq, North notes, was that the UK never really had control over Basra. The Shia inhabitants of the area, after the events of 1991, preferred to organise themselves rather than trust the coalition. Iran was seen as a better ally by some, a deadly threat by others, but always as a far more significant player than the coalition. Under constant attack, the British forces were slowly withdrawn from the area, conceding control to the militias, who started to loot, rape and slaughter at will. The inglorious end to the story – the retaking of Basra by Iraqi forces with American support in 2008 – was barely a footnote in the British media.

The contrast between Iraq and the Falklands is staggering. The Falklands were another "come as you are" war, one fought by a far more determined PM for limited goals … and one that Britain came closer to losing than anyone would like to admit. After that war, the lessons were learned and incorporated into new developments. Iraq seems, instead, to be the forgotten war. If that wasn't bad enough, most of the mistakes are already being repeated in Afghanistan.

This is an angry book, written by an angry man. It isn't pleasant reading for anyone with a British heritage, but it is necessary reading. God help us.

Lifted from Crucis Court. Thank you.