The greatest failure of them all 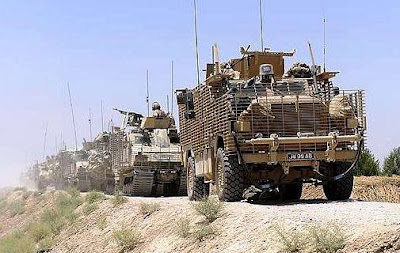 "When the IED detonated, I knew immediately what it was. There was a loud, elongated pop, a lot of dust and the vehicle was thrown about six feet into the air," says Lieutenant Colonel Roly Walker, the commanding officer of the Grenadier Guards battle group.

"The vehicle landed in such a way that I thought we were about to roll but we didn't. Nobody was hurt, we were all wearing helmets and body armour at the time but it's a pretty unnerving experience."

Outside, it was a scene of devastation. The blast ripped off the front wheels of the 15-ton Ridgeback, tossing it high off the ground. The anti-rocket bar armour was shredded and the heavily reinforced hull was cracked. But, amazingly, all six soldiers inside the vehicle escaped uninjured.

The colonel and his team were returning from Patrol Base Silab in Helmand, in January, and had decided to take a route through the desert. It was open and flat. "It wasn't really an obvious vulnerable point," says the colonel.

He continues: "I always thought it was a case of 'when' not 'if' we drove over an IED. So I felt a sense of guilty relief, to be honest. We were unhurt after all ... there was a fair amount of nervous laughter. 'Squaddie' humour kicks in and you don't think too deeply about the 'what if'. The memory stays with you and the next time you move through a VP [vulnerable point], you tend to take it a little more gingerly."

Of course, if Walker had been riding in a Viking, like his predecessor Lt-Col Thorneloe, the chances are that he would now be dead.

Yet, according to Army doctrine – which has spawned the Jackal and other absurdities – these soldiers should not have needed a protected vehicle. After all, they had decided to take a route through the desert, where mobility and unpredictability was supposed to be their protection. Unfortunately, it wasn't, but fortunately they were in a Ridgeback, the smaller cousin to the Mastiff, first introduced in 2006.

And that is why you see Ridgebacks (example illustrated above) leading convoys of highly mobile Vikings. If there is a pressure IED, then the Ridgeback will cop it and the crew will most likely survive. Anything else, apart from a Mastiff, and there is a high probability that you are breaking out the body bags.

That is what is precisely happens in another account which records the experience of a sapper going to the aid of Danish soldiers, one of whom has his body "ripped apart after his vehicle hit a roadside bomb." Although not stated, this is actually this incident where, as we record, the soldiers were driving in a Piranha armoured personnel carrier.

What is highly significant here is that both accounts appear in the same edition of a newspaper were Gen Dannatt (ret) is in given pride of place to promote "Armed Forces Day". This is the man who did his best to block the purchase of protected vehicles in 2006, who supported the purchase of the Vector and, in particular, wanted to buy the Piranha for use in Afghanistan by British forces.

In his writing, Dannatt chooses to quote from Kipling's poem "Hurrah! For the Life of a Soldier", penned in 1892 about how hard-done-by is the British soldier characterised by Tommy Atkins. Dannatt tells us the poem has much resonance today but he neglects another Kipling poem which perhaps has greater resonance, specifically to himself.

This is "The Lesson", written over a decade later, after the British failure in the Boer War. And, in neglecting the other poem Dannatt misses the opportunity to bring to our attention the lines: "It was our fault, and our very great fault—and now we must turn it to use. We have forty million reasons for failure, but not a single excuse."

But "fault" is the very last word you will find in Dannatt's vocabulary. Not only has he been the blockage, in preventing the Army being properly equipped to deal with the counter-insurgencies in Iraq and Afghanistan, this is the man who, as CGS during the seminal years of August 2006 – July 2009, presided over the failure of the British campaign in southern Iraq and the successive tactical and strategic failures in Afghanistan.

Crucially, he only realised the importance of the IED and its strategic effects towards the very end of his tenure so, while he emotes lyrically about Tommy Atkins, he skates over the fact that the death rate of British soldiers in Afghanistan is four times higher than that of US soldiers and is twice that of 2006, when they were described as being involved in the fiercest fighting since their involvement in Korea 50 years ago.

No one would accuse US forces of lacking aggression or of being reluctant to engage with the Taliban, but there are three very obvious differences between the US and British forces. One is that the Americans have a much higher proportion of protected vehicles, and have not gone down the route of using high mobility, unprotected vehicles in their search for protection.

One cannot help but feel a certain sadness, therefore, to see an officer who so egregiously let down his own troops now at the forefront of a campaign enjoining the public to support those same troops. And it is a reflection of the media, which has so often failed to identify the failings of the Army and its Generals, that it now gives so much space to the one General who was perhaps the greatest failure of them all.

Nevertheless, this seems very much in tune with the times, where there is rarely any premium on success and failure is so often rewarded. As he pockets his fees and his pension, Mr Dannatt must be mightily glad this is so. In earlier times, he might have been told to fall on his sword.