And now for the Saville Report 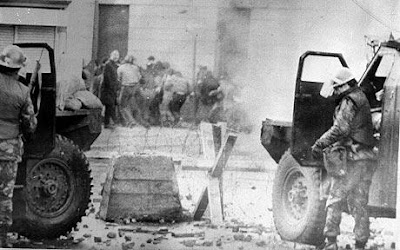 As The Boy stands up to make a statement on the £191-million Saville Report, news comes in that two soldiers from 1st Battalion The Duke of Lancaster's Regiment have been shot dead in separate incidents in Afghanistan. They died while on patrol in the Nad Ali district of Helmand province.

Their deaths bring the total number of UK troops killed in Afghanistan since 2001 to 298. Two more and we have a magic round number, so we can have another media blut-fest. It may just beat the historical account of the Paras slaughtering 14 innocent civil rights demonstrators and bystanders, an event which was to rack up the intensity of the "Troubles" and cost many more lives.

It is axiomatic that crowd control requires very special skills and discipline. Putting poorly-trained troops under the command of inexperienced officers on the front line, with rifles and live ammunition, is asking for a disaster. We did not need a report costing £191 million to tell us that.

The disaster happened on 30 January 1972, so-called "Bloody Sunday", when the gung ho* 1st Para manned the line, a Regiment which has a proud history of "killing people and breaking things", for which purposes it was designed, trained and equipped.

The resultant carnage, therefore, was not the fault of the soldiers (the Army was to lose over 100 troops that year), any more than the failures in Afghanistan are the fault of individual soldiers of the line. For that, we must look to the politicians who put them there and their senior officers. Talk of prosecution of the soldiers who fired the shots is misplaced.

But, as so often when innocent people get killed, the PBI takes the shit and we pay the bills. The lawyers walk away with the dosh (in this case, several of them have "earned" millions in fees), the officers get gongs and more sewing badges and the politicians get honours and awards. Then as now, nothing really changes.