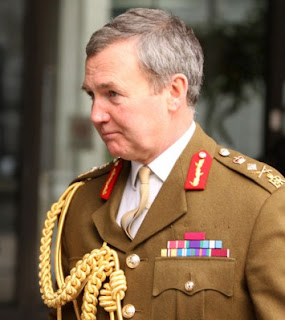 It was The Sunday Times which broke the news today that Jock Stirrup was to be "axed" by the new administration, alongside Sir Bill Jeffrey, the permanent undersecretary at the MoD.

That the CDS should be given his marching orders comes as no surprise. He had always been regarded as a Labour man or, as a slightly partisan Col Tim Collins told the paper, "... a well-known apologist for Labour muddled thinking over Afghanistan."

Actually, Stirrup had played a key role in securing mine/IED protected vehicles in August 2006, over the heads of the Army which did its best to block the purchase, and had thus attracted the gratitude of ministers who were having to carry the can for the Army brass's indifference to casualties.

Then, with the increasingly erratic CGS, Richard Dannatt, playing the prima donna, it was necessary to ensure that there was no possibility of him stepping up to become CDS. It being the Army's turn to take the top slot, extending Stirrup's term to block Dannatt was a necessary move, giving breathing space to Dannatt's successor, David Richards who, after a short period as CGS, could rightly step up to replace Stirrup in the April of next year.

Unfortunately (for him), Stirrup's apparent favour with Labour ministers – together with an impression that he was under-performing (which indeed he was) – essentially marked his cards. Certainly, he has attracted no great support from the Army. Lt-Col Stuart Tootal, who commanded the first detachment of 1,200 UK troops into Helmand, told the BBC that he bore a share of the blame for the "chronic mismanagement" of the armed forces.

Tootal admits that, "We have a tendency to blame ministers," but, he says, "we can't ignore the role of the professional heads in the form of the CDS and PUS (permanent under-secretary), who advise our ministers on what the armed forces should look like and what they do." He claims Stirrup was forcefully advised by commanders on the ground in Helmand of the "absolute requirement" for more troops and helicopters, but was "very slow" to recognise the need to act.

This may be an additional reasonb why the new defence secretary has decided to "let him go" as early as he decently could, which will be this autumn. Ostensibly, his departure – alongside the lack-lustre Jeffrey, who never amounted to much – marks the new administration seeking to draw a line under past failures in Afghanistan, and is intended to improve the military's performance on the Afghan front line.

However, the announcement from Fox – which comes in an interview with The Sunday Times rather than as a formal statement to parliament – is inviting some rather bizarre commentary.

Patrick Mercer, the standard renta-mouth for such occasions, tells The Sunday Times that change at the top of the MoD was desperately needed. "The last regime allowed our men to go into Helmand improperly prepared, while huge sums of money were squandered on projects such as the refurbishment of the Ministry of Defence," he says.

That is the sort of partisan irrelevancy one would expect from Mercer (as if the CDS was the driver behind the MoD refurbishment), but Adam Holloway does himself no favours by remarking: "There was a tendency under the Labour government to promote 'politicians in uniform' rather than officers willing to give frank advice about the strategic drift in Afghanistan."

The we have Rear-Admiral Chris Parry saying the Stirrup's successor should "stand clear of political considerations". His view is that: "Officers have been willing to let themselves be politicised as a means of climbing up the promotion ladder."

But both the Chiefs of Defence Staff the General Staff are always "politicians in uniform". To expect their successors to be any different is fantasy. In fact, by acting early, Fox is more likely to ensure a "political" successor, as the two likely candidates for the job are David Richards and the vice-chief of the defence staff, General Sir Nicholas Houghton (pictured).

It is a little bit early for Richards to take the job as he is only just bedding in as CGS, working on undoing some of the damage done by Dannatt. Thus, Houghton, a consummate politician, is favourite to get the job.

This is the man who, according to his own testimony, was instrumental in engineering the extraction of the British Army from Basra, working to the highly political brief of: "getting out of Iraq with reputation intact, with a defendable legacy."

And that might be the best clue as to what is going on. Fox is emphasising that he wants "the best people to be in the appropriate posts," while hinting that he is looking to substantial personnel cuts in the armed forces, to help him trim budgets – which can only happen with a reduced commitment in Afghanistan.

With Houghton in post, Fox would have the ideal man to manage an expeditious retreat from theatre. He will have a man practiced in the art of lying through to teeth to protect the reputation of the British Army and in pretending that its legacy is substantial and enduring – thus allowing the new defence secretary to sharpen his axe.

Houghton the "pathfinder" will pave the way.