What if we won, and nobody noticed? 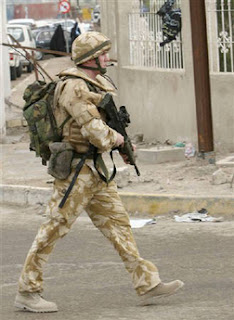 There comes a point when there is so much to write about that inertia takes over. Unable to prioritise, the moment you start one piece, the mind nags that you should be writing on something else, and so on, until you end up writing nothing.

Such is nearly the fate of this blog – with so many issues to cover and so little time – we are conscious that we give little coverage to many areas which, we would be the first to agree, are of great importance.

The great antidote to inertia, however, is obsession, and it is that which drives this piece, building on the ruminations posted yesterday about the treatment of defence issues in this nation of ours.

What struck home of all the comments (both on the forum and sent privately) was the observation that very few British blogs had linked to or commented on the Michael Yon post, even though it had featured, in a very favourable light, British troops.

This is in marked contrast to the US blogs, which (rightly) regard Yon as something of a folk hero, but it also points up a glaring contrast between US and UK politics.

In the US, you have the Global War on Terror (GWOT) being prosecuted by a right wing Republican administration, and opposed by the left wing Democrats. Thus, the fault line falls naturally between left and right. 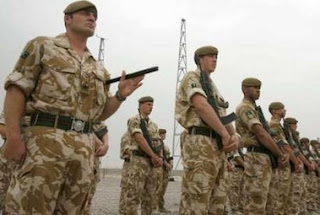 In the UK, however, the war is being prosecuted by a left wing (ish) government, whose natural supporters are temperamentally ill-disposed towards the war and, in fact, form the basis of the anti-war movement. On the other hand, the right wing, as (supposedly) represented by the Conservative Party, should be the natural supporters of military action.

However, since it is being prosecuted by Tony Blair, and any success in either the Iraqi or Afghanistan campaigns would reflect well on him – and, by default his Party – they are not so much opposed to the war as not wanting to see success.

We therefore have a situation where nowhere in the spectrum of British politics is there any champion of the current military actions. Both sides (as well as the Lib-Dems) want to see the actions fail, the left wing so as to support their demands for withdrawal, the right for the political advantage it would bring.

It is this commonality of interest which is being reflected in the media, but with subtle differences. The left wing press is openly anti-war, pro-withdrawal, while the right wing simply presents the actions as a growing mess, talking up the "quagmire" and equipment failings. Although primarily directed at the government, it nevertheless ends up with both left and right singing from the same hymn sheet.

This, of course, explains why the Michael Yon piece would get no attention from the right wing blogs. Because it shows British troops in a good light, being successful, it does not fit the narrative. The blogs will highlight the failures (perceived or otherwise) – as indeed does the right-wing media – while ignoring any successes or good news, thereby presenting an unremittingly negative picture (with a secondary narrative of "Our Boys" struggling gallantly against all the odds, and the neglect of their political masters).

In this context, it is interesting to read a trans-Atlantic perspective from Victor Davis Hanson in Pajamas Media today. He argues that, despite the political fluff:

…we are left in the end with the verdict of the battlefield. The war will be won or lost, like it or not, fairly or unjustly, in the next six months in Baghdad. Either Gen. Petraeus quells the violence to a level that even the media cannot exaggerate, or the enterprise fails, and we withdraw. For all the acrimony and hysteria at home, that in the end is what we face — the verdict of all wars that ultimately are decided by the soldiers, and then either supported or opposed by the majority at home with no views or ideology other than its desire to conform to the narrative from the front: support our winners, oppose our losers. In the end, that is what this entire hysterical four years are about.

He may be right, but that may also only apply to the US, where at least the nation is aware that it is at war, and the military actions – for better or worse – are fully reported. 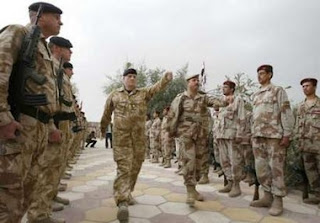 But, in the UK, such is the grip of the left-right consensus, that reporting is minimal and, as we observed, unremittingly negative. This side of the pond, therefore, we could actually find ourselves winning the war, and no one would actually know. The hold of the MSM, with the support of the politicians and their groupies in the blogosphere would simply fail to report it, or "spin" it in such a manner that victory – Tet Offensive style – becomes a defeat.

The worst of this, though, is that it is an abnegation of the national interest – and the duties of the opposition. Whether you agree with the invasion of Iraq or not, we are there and we have responsibilities to the Iraqi people for a mess which we were instrumental in creating. It is also vital to the national interest that, when we do withdraw – which is what we all want – we do so with honour, leaving a stable nation behind.

In that context, the role of the opposition – as indeed we have observed before – is to harry and provoke the government in doing a better job, a strategy which, in more normal times, would reap its own political rewards.

But this is not what Cameron has in mind. The strategy is to present the government sinking into an ever-deepening mess in the hope that it gets such a bad name (not that it actually needs much help) that even the previously unattractive Conservatives look electable. Power is the name of the game. If that means abandoning the people of Iraq, the good name of our Armed Forces and the national interest, so be it.