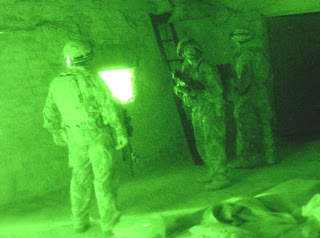 Written with all the vibrancy and excitement of drying paint, the MoD have at least posted a report of a successful raid in Basra, on the day it actually happened – complete with a video.

One of the most notable successes, says the report, was the capture of a criminal gang leader who has been involved in the extortion, kidnap and intimidation of the local Iraqi population. His capture was secured by the Yorkshire Battle Group, comprising of soldiers from the 1st Battalion of the Yorkshire Regiment and 38 Battery, 40 Regiment Royal Artillery. This particular gang leader has also been linked with IED (Improvised Explosive Device) attacks on MNF vehicles transiting along the main supply route throughout the south-eastern area of Basra from Kuwait. 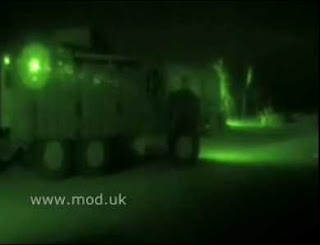 Notable in the video, albeit scarcely recognisable when viewed through night vision equipment, is the Mastiff protected patrol vehicle. This vehicle formally started operations on 1st March in Iraq, and it is good to see it in use – in perhaps a context where, either Snatch Land Rovers, or Warriors, might have been used.

Speaking of Mastiffs, there has been much excitement, albeit in the business press, about the £2.25 billion bid by BAE Systems for Armor Holdings in the United States.

This company, which makes body armour for US forces and armour kits for the Humvee, also manufactures armoured cabs for the range of tactical vehicles manufactured by Stewart and Stevenson, a company BAE Systems bought last year.

It was always the case that BAE Systems, having dumped its shares in Airbus, was going to be looking for another acquisition in the US defence sector, and Armor Holdings is seen as a prime catch, potentially increasing BAE's America's share of sales to 42 percent.

However, what the press have missed is that this is something of a consolation prize as it was known that BAE was also sniffing round Force Protection Inc, which makes the British Mastiff and the Buffalo and Cougar vehicles used by US forces. However, this company seems to have resisted BAE's blandishments.

More to the point, with an active programme of Humvee replacement, by these armoured vehicles, some of the cash that might have come Armor Holdings' way will now go to companies like Force Protection. In some senses, BAE Systems is buying into a declining business.

As if to demonstrate the popularity of Force Protection products, Canada is to buy five Buffalo, and five Cougar 6x6 vehicles for Afghanistan – all to deal with mines and IEDs. According to Defense Industry Daily, there are reports that a request for more vehicles was blocked by the USMC due to the priority of its own re-equipment programme. 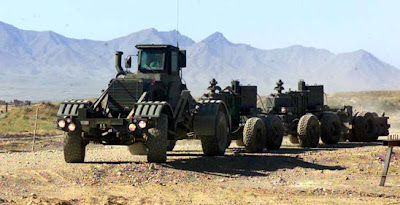 Interestingly, the Canadians are also buying six Husky mine detection systems (details here and here), a system which is led by the extraordinary-looking Meerkat. 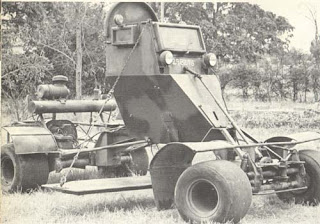 This itself is a linear development of the remarkable Pookie produced by the Rhodesians in the 1970s to deal with mines laid in the liberation struggle. It is also the type of equipment which could be used to detect buried IEDs of the type that so recently wrecked a Warrior and killed five of its occupants, and damaged a Challenger tank, badly injuring its driver.

Acting together, the Meerkat/Husky, the Cougars and the Buffalos have proved a potent counter-measure against buried explosive weapons and one wonders why the UK has not also considered purchasing this equipment.

Anyhow, none of all this need trouble the media, or the opposition politicians who (with honourable exceptions) can ignore the good news and avoid mentioning anything that would make our troops' lives easier and safer.