How to lose the war 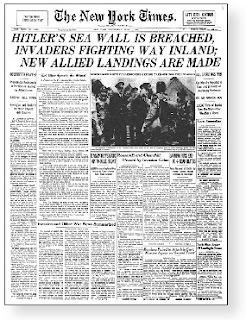 Imagine the effect on morale if, instead of the headline (shown left) proclaiming the invasion of France on 6 June 1944 – and many more like it – the newspapers had run with: "Thousands dead in Northern France – troops slaughtered on the beaches".

Then imagine the newspapers running pictures of the dead, like the one below, zealously totting up the count for every following day – with absolutely no news on how the campaign was going. And how long do you think support for the war would have lasted?

Yet, is not that exactly what our media are doing, with a particularly egregious example in The Daily Telegraph today – straight out of The Independent school of journalism? The paper prints a picture of every single one of the 50 soldiers killed as a result of service in Afghanistan (including those killed in accidents) and then, on the front page, gives a graphic account of how one soldier met his untimely death. 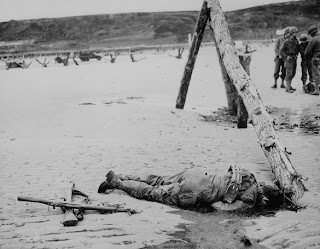 Then the paper has the absolute gall to print a commentary (down page of course) from Con Coughlin, headed, "Now we must stiffen our resolve" - stunning in its platitudinous banality.

"The latest British military fatality in Afghanistan," writes Coughlin, "the 50th since Britain committed its forces to the country's troubled Helmand province a year ago, will inevitably raise questions about the value of persisting with this seemingly intractable mission." Too right it will – the paper made absolutely sure of that, lovingly recounting the deaths of those individuals.

As we remarked in an earlier piece, this is not journalism. It is war tourism, a grotesque example of voyeurism, exploiting the deaths of brave men, simply to fill the space in a rag which still has the temerity to call itself a newspaper.

And the irony of that title is right there in the front page piece, when the paper reports: "There was also frustration that the conflict in Afghanistan registers little with the public." Its author, Thomas Harding then cites a soldier from 1st Bn Royal Anglian Regiment, saying: "This is a war, a proper war but no one back in the UK wants to know." 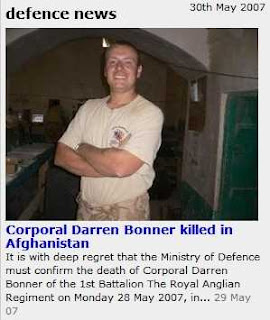 I have news for that soldier – we do want to know. But the media doesn't. It wants to fill its pages with tat and trivia, in the guise of news, paying attention to the war only when it has bad news to report, indulging its own morbid fascination with death and destruction.

But, if the media stands accused, an even worse offender is the MoD website, which gives reports of soldiers' deaths absolute priority, topping the page with initial reports and then obituaries.

Balanced only occasionally by reports of the activities of our Armed Forces, and their increasing successes, often badly written in the style of a second-rate PR release, the site takes on the aspect of a vast, official obituary column.

One can only observe that, if the media and the MoD between them want to lose the war on the home front, these cretins are going the right way about it.