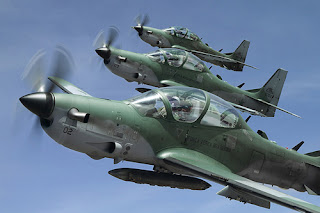 On behalf of the Iraqi government, the United States Air Force has issued a "solicitation", expressing an interest in buying at least eight counter-insurgency (COIN) aircraft that can serve a dual role as a intermediate or advanced single-engine turboprop trainer.

According to Flight Global, the specification limits potential candidates to a handful of aircraft, which include the Ryatheon T-6, the Pilatus PCM9, the Korean Aerospace KO-1 Wong Bee and, our favourite, the Embraer EMB-314 Tucano.

The proposed role is exactly in line with our posts, here and here, a concept which we articulated last December - (and here).

Reviewing the specification, it is quite remarkable how sophisticated are the capabilities of these light attack aircraft, reinforcing our view that an advanced capability can be attained without necessarily acquiring overly expensive and complex platforms.

If our own RAF can tear itself away from its obsession with faster, bigger and more expensive, and could do no better than follow the USAF lead and acquire some of its own light attack aircraft.