Why should we care? 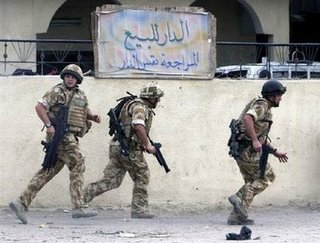 Another soldier has been killed in Basra today, announced by the MoD with the usual "deep regret". What else can they say?

The soldier, unnamed as yet, was a member of the Parachute Regiment, shot while taking part in a planned search and detention operation in Basra City earlier today. He was evacuated to a nearby military hospital and died from his injuries.

It is a horrible thing to have to admit, but there is a hierarchy in our concern about death – there always has been. Not all deaths are equal. Hence there is greater concern over one soldier in action than the one killed, apparently by accident, on a firing range in England yesterday. 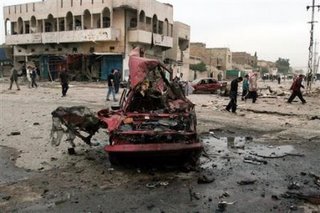 And, on this blog, it takes precedence over the 202 people killed yesterday in Baghdad as suicide bombers ripped through a Shi'ite market in northern Iraq on Friday and mortars crashed on rival Baghdad neighbourhoods, ramping up sectarian tension a day after the bloodiest bombing of the conflict killed

Two more bombers killed 22 people at Tal Afar near the Syrian border today and the country looks more like it is approaching civil war than ever before, as the Iraq government imposed a curfew in the capital and also closed the international airport. The transport ministry then took the highly unusual step of closing the airport and docks in the southern city of Basra, the country's main outlet to the vital shipping lanes in the Persian Gulf.

Grand Ayatollah Ali al-Sistani, the pre-eminent Shiite religious figure in Iraq, has condemned the bombings and issued condolences to family members of those who were killed. He called for self-control among his followers, but there is no telling whether his writ will hold firm and the Shi'ites will or even can stop their hard men going all out of the Sunnis.

You would not be human if you did not recoil from this with horror and, unable as we seem to affect the course of this violence, it is entirely natural to want no part of it, and from there to pull out our troops. The death of another soldier today can only strengthen that feeling.

What is most troubling though is the lack of resolve either way. There is no politician of any stature saying, unequivocally, that we must quit and be done with it. Nor is anyone saying that we must get stuck in there and do whatever it takes to bring peace and stability to Iraq, taking the losses and paying the price. 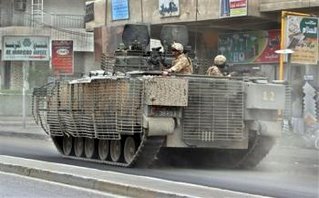 Instead, there is the government's attempt to build a fictional scenario that things are somehow getting so much better in Basra that we will soon be able to pull back our troops into their bases, prior to their departure.

All you have to do, though, is look at the pictures - troops in helmets, on the alert, weapons at the ready, patrolling in heavily armoured Warriors. Everyone who has a brain, however, and all the political hacks, know full well that this is simply NuLab spin, allowing, as the Evening Standard put it yesterday, Blair to bow out "on a wave of good news". If the handover of control in Basra to the Iraqis is timed for April, just prior to Blair's retirement, it would give him precisely the personal boost he is looking for.

But, if it is really that cynical, the real question is, what is the opposition – by which one means the "not-the-Conservative-party" - doing about it? What is its policy on Iraq? Should be stay or should we go, and if we stay, what do we need to do the job – whatever that might be. 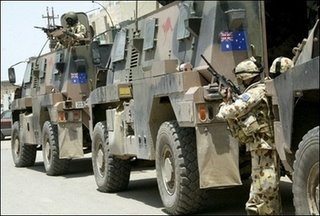 Certainly, we are getting a very clear lead from Australian prime minister John Howard, who has openly declared that an early withdrawal of coalition forces from Iraq would have disastrous consequences and give victory to "terrorists". His country's troops were active today the southern city of Samawa (illustrated) and Howard has no intention of pulling them out of Iraq.

But, one of our readers, without a return address, has e-mailed us to suggest that it was probably time to tone down the rhetoric on Dave Cameron. He did not, we were told, "merit such constant withering scorn". "I'm afraid," wrote our correspondent, "it does EU Referendum little credit. More balance and reason would not go amiss."

OK. Would somebody … anybody, like to tell us what the Boy's policy is on Iraq, and what we should make of it? And, while they are about it, could they tell us why we should care?