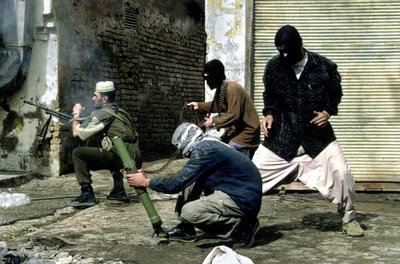 Where lies the prestige of a nation, still until recently the fourth largest economy on earth, which once ruled an empire comprising half the peoples of that earth, upon which the sun quite literally never set?

Where lies the prestige of a nation which has a defence budget measured in billions - larger than the entire GDP of some countries - which is able still to keep up with the best in technology and innovation and which maintains armed forces that are amongst the best in the world? 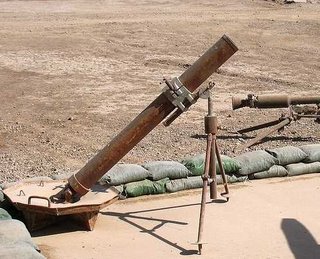 Where lies the prestige of a nation which is being held to ransom by small groups of largely ill-educated religious fanatics, intent on causing murder and mayhem, equipped with cheap, second hand weapons, and in particular the mortar, a weapon which in its present from goes back to before the First World War?

Where lies the prestige of a nation which is failing to deal with this threat, not because the technology does not exist, not because it cannot be done, but simply because it chooses not to spend the money, or expend the energy or the political capital to ensure the threat is neutralised?

Where lies the prestige of that nation which has a military establishment which seems unable for fight for the effective solutions, a media which seems to be unaware that solutions even exist and shows no inclination either to report on them or agitate for their acquisition.

And where lies a nation blessed with political classes which seem entirely unconcerned that we are being humiliated, that our entire foreign policy is at risk and that we stand to lose the prize of an independent and democratic Iraq, also losing the blood and billions in treasure so far expended on that ambition? 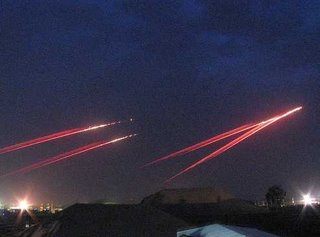 The irony is that the technology not only exists to deal with hit-and-run mortar attacks. In its various components, it is already in use by other forces, as this photograph illustrates, but not by the United Kingdom.

If assembled and deployed in an orderly and coherent fashion by our forces, the resultant systems could serve to fustrate those to whom murder and mayhem is a desirable state and thus send a message that the Western democracies are not prepared to be held to ransom. It would tell the world (and our own population of Muslims) that we have the technology, the expertise, the resources and - most importantly - the political will to defeat violence and the evil men who seek to gain from it. 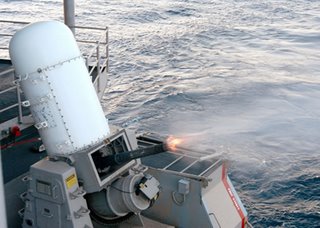 The equipment which makes the agreeable patterns seen above is an adaptation of the Phalanx Close-in Weapons System (CIWS), originally devised in the 1970s for the US Navy to provide last-ditch protection for its ships from anti-ship missiles, when all else had failed. Quite simply, Phalanx is a radar-controlled gun capable of firing 4,500 20mm shells a minute. It blasts missiles out of the sky.

But, while it was developed as a naval weapon, the US military, plagued like us by increasingly bold insurgents - who are now using the mortar as their main weapon after the Improvised Explosive Device (IED) - hit upon a startlingly simple idea. They would shoot down the relatively slow-moving mortar bombs. 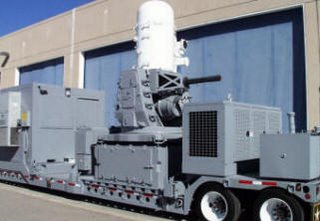 With a speed for which the cumbersome US defence procurement system is not famous, Phalanx was put to the test. In a series of land trials, it proved remarkably effective against mortar bombs - being able to destroy about 80 percent of those fired - and also the parallel threat of Katyusha rockets. Naval sets were converted for land use, acquiring the acronym C-RAM (Counter-Rocket, Artillery and Mortar) in the process. By June 2005, the first were being deployed in Iraq and a programme to cover all US bases is currently being rolled out. 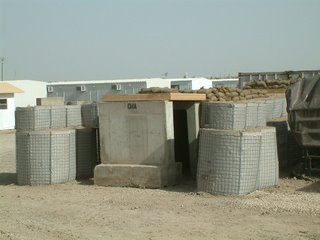 The system is not entirely foolproof with, as we indicated, only an 80 percent success rate (maximum).

But it is entirely automatic and, even if it fails to destroy an incoming bomb, the characteristic sound of its firing gives audible warning of a mortar strike. By constructing a network of easily-reached refuges and bunkers on bases - often made from the now famous Hesco - the risk to personnel has been very substantially reduced. It is even doing good service in the Baghdad "green zone". 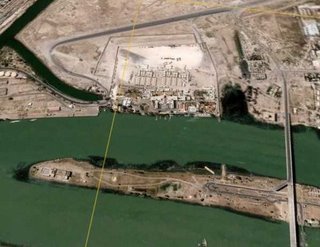 In a highly congested urban environment, such a system might have limited utility. But this is not the case with the base where, recently, a British soldier was killed and another seriously injured. The attack was on the Shatt al-Arab Hotel, when mortar bombs landed inside the base perimeter.

One of the 15 mortar rounds directed at the base actually missed its target and landed on a nearby home, killing two children and injuring a third. 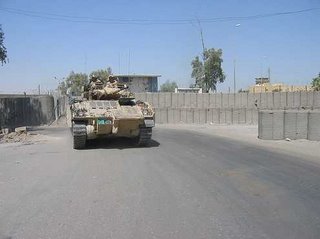 But, as can be seen from the satellite photograph of the base (above), there are clear lines of fire and there is plenty of room to deploy numerous weapons systems.

The ground photograph shown (right) - although presenting a limited view - also shows a spacious area, with a Hesco barrier perimeter which could be protected by a suitably deployed weapons system. (The main building can be seen to the right, in the distance, behind the perimeter.)

Nor indeed should deployment of C-RAM prove a problem at Basra Palace, where the Foreign Office recently evacuated the Consulate because of continued mortaring and there troops stationed in the complex have also been subjected to intense mortar fire.

Once again from the satellite photograph, we can see a spacious site, but with some added extras. As one of Saddam Hussein's former palaces, the site is surrounded by a security moat and the areas immediately around the perimeter have been cleared or naturally lack cover. Deployed weapons would have clear lines of sight and be able to cope with incoming mortar bombs in good time.

However good the system is though, it can only provide passive defence - and it should never be the case that an attacker should have free rein. Active counter-measures should always be taken.

For the British forces, we have argued that this could be provided by helicopter assault troops, guided by counter-mortar radar, which, as we have noted, is already available to our forces. That same radar is an integral part of the C-RAM system, providing the initial targeting information to direct the gun radar. 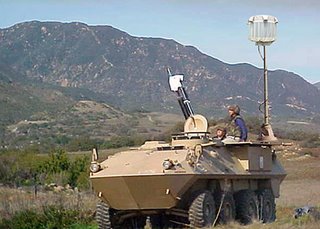 The development of lightweight counter mortar radar, however, has opened up new possibilities which have been exploited by the US Marine Corps. They have mounted the radar on a Light Armoured Vehicle (LAV), which is also fitted with a rapid-fire 120mm mortar, known as Dragon Fire. So sophisticated is this that it can be linked to the rader and rigged to fire automatically at the point from which an enemy mortar is fired.

Despite its effectiveness, though, this system will always have its limitations. As long as insurgents are prepared fire their weapons from crowded urban areas, counter-battery fire will always be restricted. The risks of colateral damage is simply too high. 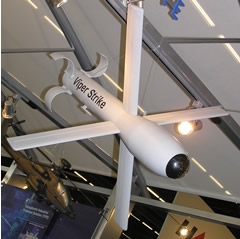 In this case, precision-targeted weapons - such as the Hellfire missile - come into their own, launched by helicopters, UAVs and ground attack aircraft. But even then, the risk of colateral damage is relatively high and, in any case, few of such weapons are designed to attack targets in urban areas. One that is though, we have mentioned previously. It is the Viper Strike, laser-guided precision missile. With a 7lb warhead and a "top attack" facility, it is an important addition to the armoury.

More recently, it has been mated with a new version of a long-endurance UAV, the MQ-5B version of the Hunter, which can carry two Viper Strike missiles on a 16-hour mission. 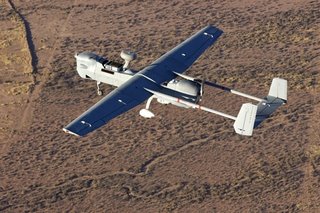 With just one of these UAVs orbiting a site like the Basra Palace complex, instant retribution could be dispensed to any mortar crew foolhardy enough to risk an attack, making them not only dangerous but, ultimately, futile. And, without the weight of the weapons, Northrop Grumman's new system has demonstrated an ability to fly for more than 21 hours, with a fully-capable surveillance package. Given the UK's lacklustre performance with UAV projects, here is a system which could provide an exceptionally useful asset in the fight against insurgents.

It was only last month that Tony Blair announced that our armed forces could have whatever they need to finish the job. Well, for the record, this post has detailed some of the tools that are needed, the sort of equipment that would avoid the extraordinary situation where we see the British Army evacuate a base, simply because it was being mortared. But now read this from the Mail on Sunday today:

Nothing less than our prestige as a nation rests on the willingness of our government to provide the tools needed to do the job. Can it rise to the challenge? And have we got to the point where we have ceased even to care whether it does, and are content to see our troops run away?

On the current evidence, it looks like our troops are going to be running.