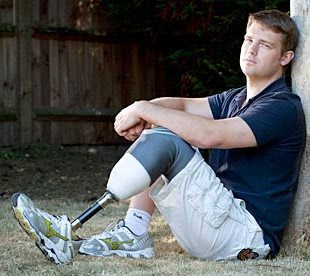 "We have this old adage," says Captain Anthony Harris of the Royal Regiment of Fusiliers (pictured): "70% skills and drills, 20% equipment, 10% luck". He goes on to say, "Unfortunately that's quite a large percentage for luck. You can overplay blame. We just happened to take the patrol on that path on that day."

This is after the man has been blown up in Helmand while riding in the commander's seat in a Jackal – as recorded by The Guardian. But the point is that it isn't an "old adage" – it is the sort of crap they are taught in soldier school by people who should know better.

Compare and contrast with this - Lt-Col Roly Walker's experience of getting blown up. He is riding in a Mastiff and survives uninjured. "I always thought it was a case of 'when' not 'if' we drove over an IED," he says afterwards. 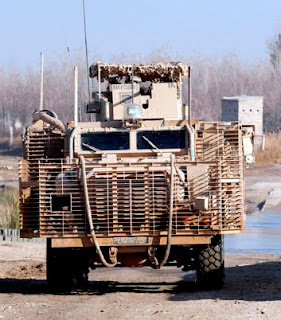 No doubt, Col Walker has his own "old adage": "100% equipment", as long as it's called a Mastiff. If you want to live, fly Mastiff. The problem is that, after the event, even after they have been blown up, some of our less intellectual people are still not putting two and two together: "I am sat over the wheel," Harris says. "The blast goes off underneath the wheel, the shockwave goes through the metal ...". Doh!

You do wonder what it takes to get the message through when, as here in September 2007, we have the Jackal being paraded, alongside Gen Dannatt telling us: "the mounting death toll in the country should not overshadow the success forces were having on the ground." The troops, he then said, "are winning the tactical battle".

Well, three years later, they're still winning the tactical battle, the ones that are still alive and in one piece - and Dannatt is collecting his pension. But his troops, after winning that tactical battle (again and again and again ...), are also pulling out of Sangin with more than 100 dead, mostly to IEDs, with three times that number very badly injured.

And that's why the MoD under the new Cleggeron adminstration are spending £45 million on another 140 Jackals. That's so we can have another batch of young men (and the occasional women) to sit over the wheels of these insane vehicles - and they too can lose their legs, or even their lives. But hey! Skills 'n' drills, skills 'n' drills ... keep taking the mantras. These prosthetics are really good when you get used to them.

But you do also wonder why newspapers, instead of doing soft-focus, human interest stories, don't point out that so many of these deaths and injuries are entirely unnecessary, brought about by enhanced stupidity, bolstered by bad tactics, misleading training, blind faith - and duff equipment.

Even stupid people and Army officers (where there is a difference) deserve better than that.