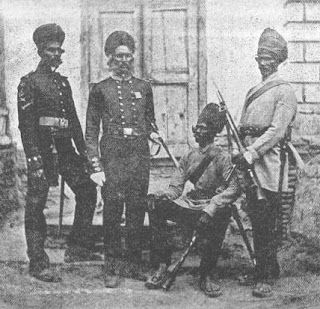 Two (or four, according to some reports) more were injured during what is termed a "joint patrol" with local forces in southern Helmand, part of the mentoring process which is supposed to be improving the capabilities of the Afghan National Army (ANA) so that it can take over duties from ISAF.

This is not the first time we have seen such an incident. In November last, a rogue Afghan policeman killed five British troops. In December, an Afghan soldier also shot dead one US soldier and wounded two Italian troops at a base in Badghis.

Sadly, over the weekend I was discussing the process with a very senior member of the previous administration, observing in my own inimitable style that: "The mentoring scheme is crap, always was crap, always will be crap ... a very expensive and stupid waste of money ... and by now a demonstrable failure."

"Consistently," I wrote, "we turn our faces away from experience, from tried and tested systems that have a track record of working, to embrace something with a poor record of success. We then pursue it well beyond the point where it has become a demonstrable failure ... and express surprise that it does not work."

This was written before the piece in the Independent on Sunday by Jonathan Owen and Brian Brady. This revealed that the strategic plan of creating an Afghan security force to replace US and British troops is in serious disarray with local forces a fraction of their reported size, infiltrated by the Taliban at senior levels, and plagued by corruption and drug addiction.

Rather than be negative (which I am not when talking to people who are prepared to listen), I had observed that, in nuts and bolts terms, the interesting thing is that to pacify the plains tribes, you often had to use hill tribesmen. This was in the days of the Raj. Conversely, it was almost impossible to get plains tribesmen to go up into the hills and fight effectively.

The trouble is, I then noted, that we have cut ourselves off from the hill tribes. They are now in Pakistan ... except that they come of the hills raiding and looking for work. But it is rather remarkable that we are prepared to hire Nepalese and use them but not raise native regiments, drawing them down from the hills with bribes and offers of work.

In fact, one of my many earlier suggestions had been precisely that we should raise native regiments, officered by the British, but as part of the British Army, not the ANA, equipped by us, with British NCOs, and paid by us. Once knocked into shape, we could then hand them over to the Afghan government.

The native levy system was one which helped us conquer the Empire, the regiments so formed then going on to form the core of the post-colonial forces. And the best examples currently are the Pakistani and Indian Armies, living testament to our past military skills.

But the point has been made. Consistently, we turn our faces away from experience, from tried and tested systems that have a track record of working, to embrace something with a poor record of success. We then pursue it well beyond the point where it has become a demonstrable failure ... and express surprise that it does not work.

The only thing we seem to be able to excel in these days is consistency.