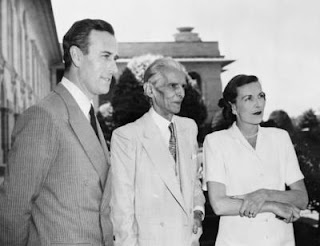 The end of the Second World War had not only left Afghanistan in a weakened state, with its development and modernisation stalled, there were new events to intensify the pressure on the country, most of all the partitioning of India, its independence and the creation of Pakistan. Obviously traumatic for the two nations involved, they had a profound effect on Afghanistan as well.

The year before partition, in May 1946, had seen Hasem Khan resign from his post as prime minister, to be replaced by his younger brother Shah Mahmud Khan, in whose hands the management of the nation resided until 1953. It was he who had to deal with what became known as the "Pathanistan Affair" which became a long-running dispute with his new neighbour, Pakistan.

This started on 3 July 1947, a month after Lord Mountbatten had announced his plan for the partition of India, The Afghan government sent a formal letter to British and Indian officials pointing out the desire of many hill tribes in the Northwest frontier and in Balochistan to break away from India and called upon the British to allow these groups to freely decide to associate themselves with India or Afghanistan or seek independence.

This approach earned a sharp rebuff from the interim Indian government, which told Afghanistan not to interfere in their "internal affairs". This, however, did not stop the leaders of the frontier tribes calling for the planned referendum on whether the frontier region would join Pakistan or India to include a proposal on complete independence for "Pathanistan".

This was rejected by both Pakistan and India, whence tribal leaders called for a boycott of the referendum. Pakistan responded by sending 15,000 troops to the area and, when the referendum was held, it had the heavily Islamic NW Frontier province voting overwhelmingly for union with Pakistan over India. However, due to the boycott, the turnout was only just over 50 percent, although the vast majority who did vote sided with Pakistan.

The refusal to include an independence option angered Mahmud's government, which had hopes of a united Pathanistan within the Afghan border, and reignited tribal unrest, souring Afghan and Pakistan relationships, to the extent that the Afhghan government refused to recognise the Durand line, and voted against the entry of Pakistan into the UN.

Nor was the frontier district the only bone of contention. With the absorption of Balochistan into the Pakistani state in 1948 – against the wishes of its peoples – Afghanistan sought a corridor from its southern border to the Arabian sea, a request that was firmly refused by the Pakistanis.

Later, the Afghanistan government sponsored a Pashtunistan government in exile, led by the Fakir of Ipi, who had caused so much trouble to the British in 1938 and who was now fomenting unrest against the Pakistani government.

At a time also when Pakistan was fighting the first Indo-Pakistan war in Kashmir, the Afghan government was entertaining the idea of linking with India along the axis formed by the Hunza valley, Nagir and Gilgit in northern Kashnir, to create a 50 mile contiguous border, with India recognising the establishment of an autonomous tribal state, at the expense of Pakistan.

By mid-1948 the Pakistani government was dealing with major episodes of unrest in the tribal areas, having to implement emergency powers to prevent an insurgency spreading, and launching a major military offensive against suspected rebels.

The following year, the situation had deteriorated even further as reports circulated of "atrocities" by the Pakistanis against the frontier populations. The Afghan government launched a major war of invective against Pakistan, calling for the right of self-determination for all groups in the frontier and tribal territories. It moved several divisions to the Pakistani border in late March and on 27 April 1949, Mahmud Khan threatened Pakistan with "strong action" if the atrocities did not cease.

In the June, the Afghan government convened a loya jirga which repudiated all treaties that had been signed between former Afghan governments and British India, including the Durand Treaty. It also declared the Fakir of Ipi the "president" of "independent" Pashtunistan. That month, Pakistani aircraft bombed an Afghan border village killing 23 people and injuring 24, subsequently claiming it had been a mistake.

Against this atmosphere of growing hostility, in July 1949 the British government, increasingly alarmed over the growing unrest in the area, intervened in the dispute, in support of Pakistan.

This had no effect on the level of hostility, with tribal incursions from Afghanistan into Pakistan taking place in 1950 and 1951. So bad did the situation become that, at one stage, diplomatic relations were severed and Pakistan imposed a blockade on petroleum products destined for Afghanistan through the port of Karachi.

With Western support coalescing around Pakistan, Afghanistan turned to the old enemy, the Soviet Union, which showed a willingness to help. In 1950, the Afghan government and the USSR concluded a major trade agreement, which allowed Afghanistan to barter wool and cotton for petroleum and other commodities, on highly favourable terms. As a result, the Soviet Union lodged a major foothold in the camp of its old adversary.

Then, in 1953, Mahmud Khan was deposed as prime minister by Lt-Gen. Mohammad Daud Khan. Sources variously describe this as a "bloodless coup d'état" and an "orderly transfer of power". Either way, this former commander of the Kabul Army Corps and then defence minister was the older half-brother of Nadir Khan, cousin and brother-in-law to the king. Under his tenure as prime minister, he was to take Afghanistan even closer to the USSR and, as a prominent Pashtun nationalist, he was to antagonise Pakistan still further.

Thus, in the space of less than six years, when – through Britain – Afghanistan had enjoyed cordial relations with the West, the country had turned completely. As the Cold War intensified, it was well on its way to becoming a client state of the USSR, at odds with its neighbour and a major destabilising factor in the region.

But then, in Helmand, the area currently giving us so much grief, there were the Americans.