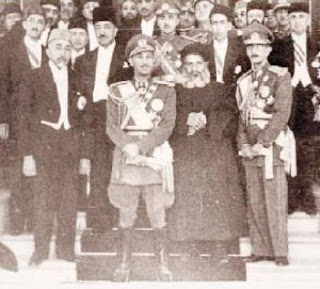 Our romp through Afghan history now brings us to the reign of the last king, Mohammad Ẓahir Shah (pictured). As Nadir Shah's only surviving son, he took the throne in 1933 on the assassination of his father, thus continuing the Barakzai Durrani dynasty.

Then only nineteen years old, Ẓahir was not in a position to exert his will and the real power was held by two of Nadir's brothers, Mohammad Hasem Khan and Shah Maḥmud, who held the position of prime minister from 1929-46 and 1946-53 respectively. In fact, Zahir Shah was not able to govern on his own in 1963.

Under Hasem Kahn's rule, a man who, during a period as the country's ambassador to the USSR, had developed an "intense dislike" for all things Soviet, relationships with Britain improved substantially, with Hasem agreeing to coordinate action on the borders to prevent tribesmen participating in hostile acts towards the British. There was even talk of Indian assistance to help Afghanistan set up a border police force.

This was certainly needed as the border area with India was plagued by a series of uprisings from 1932 to 1935, including a group known as the "Red Shirts", which became so troublesome to the British that it prompted a punitive expedition of 30,000 troops in 1935. In 1938, the British then had to deal with another uprising in Waziristan, fomented by the Fakir of Ipi,

During this early period, Afghanistan sought to take a greater part in the affairs of the "international community" and had joined the League of Nations in 1934, also in that year settling a long-standing frontier dispute with Iran, assisted by Turkey as the mediator. Three years later, Kabul concluded the Saadabad Pact, a non-aggression treaty with Iran, Iraq, and Turkey.

A preoccupation of the Zahir government during this time was the modernisation of its armed forces, primarily to defend its territories against Soviet incursions, for which purpose it looked to the UK for assistance.

Already, in 1931, Nadir Shah had looked to Britain for protection in the event of a Soviet attack. But military authorities considered the northern borders as "absolutely indefensible" and a cash-strapped British government, in the throes of the Great Depression, refused to give the Kabul government any firm assurances or assistance.

Increasingly, therefore, the Afghan government turned to a new player on the block, Nazi Germany, for economic and military modernization. As a relationship built, by 1936 Hitler's Germany was not only hosting the Afghan hockey team and officials as special guests at the Berlin Olympics, it had also massively increased trade and weapons deliveries to Afghanistan.

In 1938, a weekly air service, the first of its kind, was established between Kabul and Berlin. The Organization Todt provided plans and supervision for major infrastructure projects such as roads, bridges, airfields, and industrial plants while German officers undertook a programme designed to equip and train the Afghan armed forces to Western standards. In two years German trade with Afghanistan increased tenfold.

In August 1939, Afghanistan and Germany signed a ten-year comprehensive economic agreement, in which the German government became Afghanistan's chief supplier of economic and military assistance. Later, some attempts – largely unsuccessful – were made by the Germans to exploit the tribal conflicts, in order to keep British troops tied up in the frontier area.

Despite German agitation, on the outbreak of war, Afghanistan maintained a policy of strict neutrality. With the Nazi-Soviet pact in place, however, Hasem briefly entertained allowing British troops to be stationed in Herat and Kabul. The British authorities, considering a Soviet invasion of Afghanistan and India a distinct possibility, secretly considered integrating Afghan forces into the Indian defence plans.

Interestingly, about that time, two British officers, Brigadier GN Molesworth and Major AS Lancaster, conducted an evaluation of the Afghan Army, concluding that leadership was in "short supply". Molesworth claimed that the officers were afflicted with "oriental chicanery, indolence, ignorance and incapacity".

Their "idiotic" war plans, he said, seemed to have been composed overnight and were wholly inadequate. Their armament requests seemed but "a stupendous and fantastic list of war material" and their attraction for modern equipment amounted to "children playing with expensive and half-comprehended toys". He dismissed the army as "little more than a facade and of little value off the barrack square", declaring that, "to expend time, energy and money on such a concern ... is sheer waste".

Following the fall of France, however, Stalin withdrew most of his forces from central Asia and, with it the threat of a Soviet invasion. Hasem renewed his enthusiasm for German assistance, which soured Anglo-Afghan relations. The Nazi and other Axis links caused some nervousness and, for a short time, the British feared a German invasion of India, through Afghanistan – even mining the Khyber Pass as a precaution

After the launch of Operation Barbarossa, though, October 1941, the British and Soviets, acting together, insisted on the expulsion of non-official Axis nationals from Afghanistan. Despite continued attempts to foment trouble, the German threat was to come to nothing. During the war period, the northwest frontier was remarkably peaceful, with the Pashtuns on the Indian side of the Durand line expressing support for the war, and even offering gifts to stricken Londoners during the Blitz.

Military weakness further necessitated cooperation with the West. In 1945, an uprising of the Safi tribe, caused by government attempts to enforce conscription, erupted in southern Afghanistan. Though a minor revolt by most standards, the army experienced great difficulty in containing it. Ultimately, the government had to arm other tribes and abandon the idea of conscription in order to supress the rebellion.

The aftermath of the war saw strengthened US involvement in South Asia, while the Cold War in Europe heightened in Europe. The Soviets, perturbed over Anglo-American inroads into Afghanistan – with Afghanistan having appointed its first ambassador to the USA in 1943 - thus stepped up pressure on the Afghan government to make economic concessions, at the same time increasing border tensions and espionage, seeking also to foment tribal uprisings in the border areas.

In response to the renewed Soviet threat, the Afghan government again sought closer military relations with British India, to which Britain – this time - responded positively. Even then, it was acknowledged that the Afghan Army was inadequate, and would not be able to meet a Soviet invasion head on.

Contemporary reports noted a lack of the technical and administrative skills necessary to wage a modern war. Officers lacked professionalism, the logistics system was rudimentary, most equipment was obsolescent and the illiterate and poorly disciplined Afghan conscripts were largely ignorant of modern warfare techniques.

Nevertheless, through what was known as the "Lancaster Plan", the Afghan government was offered substantial quantities of military equipment, discounted by 50 percent, sold on easy credit terms. By early 1947, Afghanistan was largely dependent on Britain for supplies, instructors and technical assistance. The entire Afghan air force was equipped with British aircraft and all the pilots were British-trained.

This was to prove the pinnacle of British – and indeed Western relations - in the immediate post-war period and for some many decades. On the near horizon, though, was Indian independence, partition and the creation of Pakistan.

With partition, Britain was no longer able or willing to assist Afghanistan, or even interested in so doing. The successor states of Pakistan and India were equally disinterested, leaving the US as Afghanistan's only potential Western sponsor. Britain lost its only opportunity to bring order to a chaotic post-war settlement.

In 1946, however, a project was launched in Helmand, initially as a commercial venture by a US firm, which was later to become part of an increasingly elaborate and expensive US government aid programme, which lasted until 1979, in competition with the Soviets in the North. Aghanistan became a surrogate battlefield in the Cold War, the weapon civil aid rather than military might. This, we will explore in a future post.