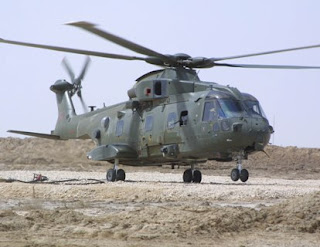 Developing almost into a ritual, we get a "media scoop" revealing one or other failures in equipment provision – in this case the shortage of helicopters - which is then followed by ministerial statements and the top brass, weighing in to defend the status quo.

The affair is batted about for a few days, there may or may not be Questions in the House and the occasional portentous leader and then the issue dies … until the next time.

So it is that we see today The Sunday Times revisit the Haddon-Cave Nimrod Review, one of several to offer verdicts on the report, with a leader entitled "The Defence Ministry needs a good cull".

The points it makes about the technical deficiencies of the Nimrod air-to-air refuelling are obviously sound but, reinforcing our suspicions about the treatment of the original 587-page report, it is evident that the author of the leader has not read it fully, if at all. Thus, the focus is on the one very specific aspect of "cost-cutting".

Here also, the points made are very obviously sound, the argument being made that: "It is possible to reduce costs in a large organisation and make it leaner and more effective, but the process must be implemented shrewdly." The paper then laments that "cost-cutting was in the hands of senior officers who would have been at home with a Stalinist five-year plan."

Thus we are told that orders were received and ruthlessly implemented. Promotions were awarded for objectives "achieved". Calamitous consequences, such as keeping in use a dangerous air refuelling system, were covered up. The defence industry connived at this fairy tale in exchange for buckets of cash. Warnings of disaster were ignored.

None of this can be disputed, but what the paper ignores is the bigger picture. The events described occurred within a system that had been progressively degraded, over decades rather than years, losing its ethos, its institutional memory and attracting a sclerotic burden of regulation that had long since ceased to perform any useful purpose, other than providing "handy protection against any against future criticism which might be made."

The fatuity of such a pronouncement is almost self-evident in that, if there is – as Haddon Cave identified – a massive system failure, simply replacing one set of personnel with another does nothing to address the underlying faults. Whether the existing place-holders were "fools and knaves" is moot. More likely, they were trapped by the inadequacies of the system in which any successors would find themselves equally mired.

In terms of media comment, The Financial Times does much better, noting how "Britain's armed forces have for years been dogged by stories of how troops operating in dangerous places are seriously under-resourced, lacking the equipment and training they need."

In terms of seeking improvements, this paper then makes the obvious but necessary point that the starting point should be the promised Strategic Defence Review. But, it says, the next government must do more than this. It must also reform how the MoD spends money. Safety, inter alia can only be guaranteed if money is not being frittered away elsewhere.

Thus does this newspaper come to the same conclusion that we have been urging on the defence establishment for years. For instance, on 8 November 2007, when former CDS Charles Guthrie was demanding more money for defence – to the applause of the political claque and the phalanx of media commentators - our tiny voice was asking: "How about value for money?"

What was being missed then, and has also been ignored by Haddon-Cave, is that the Nimrods about which so much has been written, had no business being in Afghanistan at all. This was a maritime reconnaissance aircraft, ill-equipped for land surveillance, and hugely expensive to operate. Flying out of Oman, at £30,000 per hour, a 12-hour sortie would cost £360,000 – three missions would gobble up over £1 million.

Yet, ill-equipped as it was, all the aircraft could offer was "full motion video" – using exactly the same surveillance equipment seen on light police helicopters in our own skies, radio-relay services and a limited command and control capability.

Those functions could have been provided far more cheaply by a variety of other assets, including UAVs and light aircraft, and it is germane to note that, since the Nimrods have been withdrawn, there have been no complaints about a lack of surveillance capability. The gap has been filled by other equipment. Why it was not there originally, and why the wholly inadequate Nimrod was pressed into service is part of another story.

Therein lies more of the bigger picture, which The Financial Times does not really address, although some of the issues might be considered in the SDR. However, experience tells us that it would be unwise to be optimistic.

This brings us full circle to the current hystèrie du jour, the shortage of helicopters in Afghanistan. For all the portentous ruminations of the media, none yet have focused on the fact that the shortfall could have been remedied, quickly and vastly more cheaply than the eventual half-hearted solution now in place, or that the Defence Chiefs conspired to prevent the cheaper solution being adopted.

The £186 million, effectively wasted on acquiring six Merlin helicopters – to say nothing of additional millions wasted on the extravagant operating costs of this machine – could have funded all the helicopters needed in theatre, with cash left over to fund many of the items which are currently subject to "penny-pinching".

The trouble is that, even in this day and age, MPs and their claque still take much of their information and opinion from the media. Thus, as long as the media fails to focus on issues like this, part of the bigger picture, we will not make much progress. We will continue to have massive problems with defence spending, and the media, with its superficial, one-dimensional analyses, will remain part of the problem.