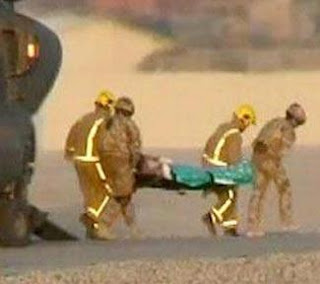 When rumours of a major incident in Nad-e-Ali started circulating yesterday, from which we learned that five British soldiers had been killed, the limited details available indicated that this might have been an ambush by tribesmen disguised as Afghan police.

As such this would have been an alarming development, but nothing particularly new. Even back in April 2007, CNN was reporting incidents of US patrols being attacked by Taliban donning Afghan national police (ANP) uniforms.

As a ruse de guerre, therefore, this is a familiar tactic – although mounting attacks in the uniform of your enemy is specifically outlawed by the Geneva convention – not that such niceties would trouble these terrorist bands. Nevertheless, for troops so disguised to kill others is considered murder, and treated accordingly.

With details of this incident as yet still unclear, we now have confirmed the tragic death of five soldiers, three from the Grenadier Guards and two from the Royal Military Police. They all died of gunshot wounds after an attack by what is variously reported as a lone gunman in the uniform of an Afghan policeman, who – at the time of first reporting - may or may not have been the genuine article, or a terrorist in disguise. Another six British soldiers and two Afghan policemen were wounded.

The Press Association is reporting a prime ministerial statement, with Gordon Brown telling the Commons that the Taliban are claiming responsibility, but that is only to be expected, irrespective of the actual circumstances.

If this was a deliberate operation, then it has all the hallmarks of a Haqqani Network operation, although the group – based in South Waziristan - would have been out of its normal area of operations.

As information becomes clearer, Thomas Harding in The Daily Telegraph is reporting that police in Helmand said the attacker attended a police academy in Kandahar, southern Afghanistan, and had been working as an officer in the Nad-e-Ali area for three years.

ITV News reports that tribal elders in Helmand have confirmed that the attacker was a member of the Taliban called Gulbuddin, who had worked in two areas under different police commanders. There are also suggestions that he had animosity towards his superiors after being repeatedly moved around the country as part of his duties.

Nevertheless, a Taliban spokesman is cited as saying: "We want to sow mistrust between the Afghan National Police and foreign forces," a very obvious tactic where the coalition exit plan is so reliant on being able to pass on security responsibilities to local forces.

This issue is heavily rehearsed in The Independent, which cites Captain Haji Laljan of the ANP. He says: "Yes, some of them go over to the other side and join the Taliban we are aware of this. We try to stop it, but it will happen."

Actually, again there is nothing new in this. Churchill in his book on the Malakand expedition in 1897, retailed complaints about the duplicity and treachery of locally impressed tribesmen. Snipers who assailed the British camps during the hours of darkness were often the irregulars who, during the day, fought for the Crown.

That, in fact, is the reality of Afghanistan. But now we have Maj-Gen Carter in theatre saying that the army would develop an "understanding" of Afghan troops through the training process.

The trouble is that being "capable" does not buy loyalty. The coalition forces, whatever their good intentions, are increasingly seen as an army of occupation, more so with the charade of the presidential election. Carter can do all he likes, set up any systems he likes. But, if the army does develop an "understanding" of Afghan troops, it will learn that their loyalty can never be assured.

The deaths of five soldiers, with the injury of the others, is a testament to that fact, one of which our forefathers were well aware. Murder was done, but murder is a way of life in that country.