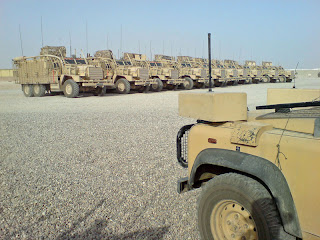 Defence questions in the House today brought Conservative MP Ann Winterton face-to-face with Defence Secretary Des Browne this afternoon as she asked if he would make a statement on the future availability of the Mastiff vehicle. This, of course, is the "patsy" question, which goes on the order book so the secretary of state has advance notice and has a reply prepared by his faithful civil servants. Nevertheless, the response was not without interest. Browne told the House:

Procurement of the Mastiff protected patrol vehicle has been a huge success. Just 23 weeks after the decision to procure was taken, Mastiff had been built, upgraded, tested and shipped out to theatre, along with a developed support package. It has proven itself in the field as highly capable and is hugely popular with troops on the ground, providing vital protection with effective mobility.

With respect to the hon. Lady, I am withholding further information on vehicle availability, as the disclosure of this information would or would be likely to prejudice the security and operational effectiveness of our armed forces, but I extend to her the offer that I have made to her regularly; if she wants to know the detail of that information, I am happy to provide it on a confidential basis in a personal briefing.

The "killer" blow, however, comes with the single supplementary that an MP is allowed, of which the secretary of state has no knowledge. The civil servants try to guess what might be coming, and offer a range of possible questions and answers, so the game is to try to outguess the guessers, and come up with something completely unpredictable, if you are so minded. Ann Winterton opted for this:

I am grateful to the Secretary of State for that answer. He is aware that one of the reasons why the Mastiff vehicle is so popular with our troops and has proved such a success is that enhanced security was designed into the vehicle from the outset in its V-shaped hull. It is built from commercial components, so that if it is, by any chance, hit by a mine, replacements can be easily bolted back on to the vehicle, to ensure that it returns to action in double-quick time. Will the Secretary of State give an assurance that the future rapid effect system vehicle will exhibit those admirable attributes, which save the lives of British servicemen day by day?

Whether that was truly unpredictable is a moot point, but we were not at all unhappy with the answer:

The hon. Lady is consistent in her questioning and in her interest. She has substantial knowledge of the capabilities of protected vehicles, and I commend her for being so consistent and well informed in that regard. I assure her that she is no less informed in relation to these matters than those who have to make the decision about FRES, not least senior officers in the Army.

That we were "not unhappy" is perhaps the tiniest of understatements. "No less informed …" than "… senior officers in the Army". My guess is that FRES, in its current form at least, is toast.