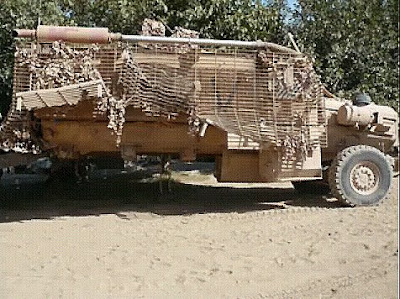 Two more soldiers have been killed, probably in a Jackal, bringing the number eight who have lost their lives in this machine. Two more have died in Vikings, one in an incident on 14 May and the other on the 22nd.

Compare and contrast with the Mastiff (pictured above) after a mine or IED strike in Afghanistan. From the damage – not least to the bar armour on the sides - it looks to have been a very significant explosion. Whether there were any injuries, we do not know, but there were no deaths. Despite multiple strikes, not one soldier has ever been killed in a Mastiff.

What also comes over very clearly from the video grab – taken from a short film on the 2 Scots Mastiff Company – is the "v-shaped" hull profile. It is this that provides the degree of protection which has enabled the occupants of the vehicle to survive – a design attribute which cannot be "bolted on" after the event.

Other techniques can also be used. One is "distance" – maximising the distance between the expected location of the blast and the crew compartment. This can be achieved by putting the engine in front of the cab – the so-called "engine forward" design – and by ensuring the vehicle has high ground clearance. This latter attribute is, in any event, a feature of off-road vehicles.

The use of energy absorbing materials is also valuable – and not necessarily high-tech. The Rhodesians found that by half-filling tyres with water absorbed much of the blast from a mine strike, improving survivability. At the other end of the scale are deformable materials which, in the process of being deformed by a blast, absorb energy and thus reduce the force transmitted to the hull of the vehicle.

This technique is often combined with the use of "sacrificial" parts – like wheels and mudguards – which are so designed as to allow them to be blown off by the force of a blast, so absorbing energy. 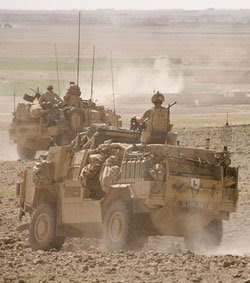 Both the Jackal (right) and the Viking (below left), however, lack the "v-shaped" hull profile and although they are armoured, without this design feature, there is a limit to what armour can do. Up to a point, heavy armour can provide a degree of protection but, unless it is shaped to deflect blast, the weight requirement will end up being so formidable that the vehicle so equipped will not be able to function.

In each case, other protection features are absent as well, especially with the Jackal which has a "cab forward" design, making the driver and his front passenger particularly vulnerable to IEDs and mines which explode under the front wheels.

That these vehicles should be so vulnerable – by design – is an indictment of the MoD and its military "customers". In a theatre where the IED and mine are the weapons of choice for the insurgents, it is – to say the very least – unwise to field vehicles which cannot protect their crews from these basic weapons.

Basic principles, developed in the 60s by the British Army and industry, since developed and refined by the Rhodesians, the South Africans, Israelis and Americans, have been virtually ignored by the very people who pioneered them, with the inevitable result that troops have died and are dying unnecessarily.

But, if the MoD and military have been slow to embrace this – with successive defence secretaries failing to force the pace – theirs is not the ultimate responsibility for our troops being furnished with inadequate equipment. As we never tire of saying, the buck ultimately stops with Parliament as it – constitutionally – is the body charged with scrutinising the government and holding it to account. 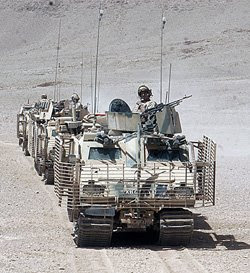 To be fair, it is not just this Parliament which is at fault. The first mine-protected vehicles were taken on charge in 1966 and, when they were finally paid off, they do not appear to have been replaced. Then and subsequently, no one seems to have asked why not.

When in 1992 or thereabouts, the Army again found the need to purchase mine protected vehicles, the event seems to have gone unrecorded outside the military. And when again, those vehicles were paid off in 2003, and replaced by small numbers of different vehicles, again no one seems to have remarked on the event.

Yet, when the need for mine/blast protected vehicles is so evident, and the US is undergoing a programme of identifying the next generation, light high-mobility mine protected vehicles, there is very little evidence that Parliament as an institution is taking the matter seriously.

For sure, Ann Winterton has raised the matter again and again and again and again. But no other MP seems to have embraced the issue, the opposition front benches have remained largely silent and the Defence Committee has been worse than useless. And one MP endlessly "banging on" is not enough. MPs must "hunt as a pack" if they are to achieve anything. Without more support, this issue is going nowhere.

Now, at the end of this Parliament – some time next year, one assumes – Ann will be retiring. Almost certainly, we will have a new administration, drawn from the very MPs who have not yet stirred themselves on this issue. That does not auger well for the future. Whether the demoralised and much depleted numbers of Labour MPs will be able to mount an effective attack looks very unlikely.

On that basis, the prognosis for the future looks very poor – depressingly so. With the one consistent champion of properly designed vehicles departing the field, there does not look to be a replacement. Even if there was, one would not be enough. Parliament will be the weaker for the loss of its champion and it is a poor reflection on the institution that, when all is said and done, MPs do not really regard the unnecessary deaths of soldiers as that important.