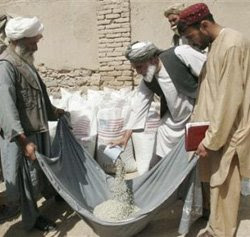 If the worst predictions of the military come true, I wrote on the forum yesterday, Afghanistan during the summer is going to be a bloodbath. Right on cue, therefore, comes The Sunday Telegraph offering the headline, "Helmand commanders prepare for a summer of violence as four dead soldiers named".

However, not only do you have to reach page 14 to read this news – with pages 1-9 (and the editorial page) taken up with the MPs' expenses controversy, that is almost all you get – just two short paragraphs, with the rest of the long piece taken up with eulogies on the four dead soldiers. The latter should, of course, be published but the scant space allowed to the headline issue hardly does it justice.

The trouble with this lack of coverage and the military trying to "hold the line", deluding itself that it is making progress - suppressing adverse publicity - the public is not prepared for the flood of bad new that could emerge. The political impact of this, therefore, could be more intense than if there had been a steady flow of news, with a more grown-up strategic appreciation.

Quite what the effect will be is anyone's guess, but I would hazard that we will see a marked upsurge in anti-war sentiment which will build over term. By the time the Tories get in, I suspect the nation (and the Tories) will be disposed to call for a staged withdrawal of British forces. To that extent, the media (by its absence) could have played a very significant part in events. While it prattles on about MPs' expenses, we lose the war in Afghanistan.

A very good indicator of how precarious the situation has become was the "October offensive" of the Taleban in Lashkar Gah. As the detail filters through, we are beginning to appreciate that it was a very close-run thing ... almost in the "Tet Offensive" league.

The British soldiers killed on 7 May was also something of a wake-up call, not least the suicide bombing in Gereshk, just south of Lashkar Gar, where two soldiers were killed.

As worrying, in Gereshk yesterday, there was another suicide bombing, reported by the AP news agency and by others, with variously nine killed and up to 20 wounded.

What marked this out was that it was again targeted at security forces, in this case an Afghan police convoy, with four policemen and one soldier among the dead. The style of attack was also worrying. Two bombers were involved. The first was on a motorbike. He detonated his explosives near a taxi stand and police checkpoint in the town. When police and army units responded to the scene, a second suicide bomber on foot detonated his explosives, causing a majority of the casualties.

There is no indication that there were any ISAF casualties and, without UK deaths, it is unlikely that this incident will get much of an airing in the British media. Afghan deaths rarely seem to count, unless they can be attributed to US forces.

But, over the last few days, a very significant number of Afghani nationals have been murdered, not least yesterday when a group of workers were on their way to a construction site near the border with Pakistan. Their vehicle was blown up by a roadside bomb in Haskamina district of eastern Nangarhar province, killing seven workers and their driver. They were building outposts for border police forces in the district.

Wearily, one looks at the "bigger picture" to see little significant change in the 2008 opium crop in the southern provinces and, such changes as there were, reflect higher wheat prices, leading to a slight downturn expected in the 2009 opium crop.

But, as Tehran Times reminds us, while Afghanistan produced only 185 tons of opium under the Taleban, following the US invasion, drug production surged to 3,400 tons and by 2007, opium trade reached all-time high of 8,200 tons.

That it is retreating from that record level is a function of market over-supply, with huge surplusses being produced, the whereabouts of which remains a mystery.

Someone paying attention to the "bigger picture" (or part of it) is Patrick Cockburn. Most recently, he has commented again on the situation in Bala Baluk - where, like us, he is relying on second-hand information. Still calling the US bombing an "atrocity", he comes to the conclusion that the truth "will be slow to emerge".

A few days before that, he was writing a general piece, again in The Independent, headed, "Where the Taliban roam". Winner of this year's Orwell Prize for journalism, he finds a nation fractured by war, bled dry by corruption and governed by fear, painting a very downbeat picture.

You have to be careful with Cockburn. He is the classic wennai, as in, "When I was in …". Strong on descriptive detail, he makes the mistake of presenting the sum total of what he experiences, what he is told from limited, self-selected sources, and what he believes – with a patina of research - as representing the one and only reality. Sometimes, he may get it right, but his approach in southern Iraq during the British occupation led him and his readers up the garden path, getting the narrative spectacularly wrong.

Nevertheless, Cockburn's general thesis is largely supported by the Long War Journal which tells us – citing a Canadian source that the Taleban claim control of more than 70 percent of Afghanistan's rural areas and to have established shadow governments in 31 of Afghanistan's 34 provinces. Of the rest, they own the night one hundred percent.

We also find another earlier piece from the Star Ledger, by Stephen Palmer, who points out how much ordinary Afghans are suffering from the fighting. There was a 39 percent increase in civilian deaths last year, about 55 percent of the 2,118 atrributable to the Taleban and 39 percent arising from operations conducted by the military, including Afghan forces. Residents are dreading the arrival of more foreign troops, expecting more violence in their wake.

The Taleban's ability to freely roam the countryside has allowed them to continue staging attacks and keep international and Afghan security forces in pursuit rather than expanding their areas of control, writes Palmer. As a result, provincial officials in Lashkar Gah worry about losing support in the face of growing Taleban influence.

The only light note comes from the Mail on Sunday which retails a vingnette concerning David Cameron.

He was involved in "an amusing incident" during a recent visit to British troops under siege at their Lashkagar base. When a senior officer said, "We had better go inside, Mr Cameron, it's getting hot here," Dave could not move fast enough, saying, "Yes, I can hear gunfire, too." The officer replied bashfully: "No sir, I meant the sun is getting hot - the shooting is miles away."

The shooting is even further away now, but it seems to be getting louder. The trouble is, no one seems to be listening.