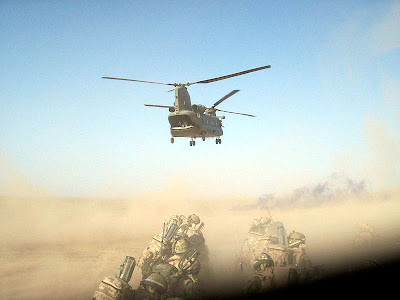 It is now a matter of record that one of the reasons why the platoon house at Musa Qala in 2006 was effectively surrendered to the Taleban was that it had become too dependent on Chinooks for supply.

With a limited number of landing sites, and the Taleban closing in, it was felt that it would be only a matter of time before the insurgents "got lucky" and downed one of these helicopters. The effect on public opinion - with the loss of upwards of 40 personnel - would have been, it was felt at the time, so severe that it is unlikely that continued British participation in Afghanistan would have been politically possible.

At that time, possibly the main threat to helicopters was RPGs, ground fire from Kalashnikovs and even 12.7mm machine guns. But, as the campaign progressed, there was an even more serious threat – the possibility of hand-held guided missiles (MANPADS as they are called) bringing down a machine.

That this has not happened – despite several attempts – is one of the untold successes of the military, and British industry. Aircraft in theatre have been fitted with a complex of physical and electronic countermeasures, known collectively as the Defence Aids Suite (DAS) which, with a combination of good tactics, superbly skilled flying and an element of luck, have thwarted Taleban attacks.

However, in a sinister turn of events, it could be that the Taleban are reverting to old technology – the dedicated anti-aircraft gun - in an attempt to achieve a "spectacular", the shooting down of a fully-laden Chinook. This, they are fully aware, could still have a devastating effect on British sentiment towards the war.

Possibly, there was some intimation of this development on 15 November last year when US Air Force A-10 Thunderbolt IIs were called in to fire cannon rounds and a B-1B Lancer dropped a GBU-38 onto Taleban hiding in a compound trying to shoot down an aircraft. A coalition aircraft also performed a show of force to deter enemy activities near the compound where the anti-aircraft fire was seen.

Nothing much was made of this at the time but, as we reported recently on 21 April there was another disturbing development.

In the space of 12 hours, the Taleban had fielded two heavy anti-aircraft weapons, each capable of taking out a Chinook or other British helicopter. Both were Soviet-made ZPU-1s, loaded and ready for use, mounted on the back of pick-up trucks. They were located in the Nad Ali district, close to Lashkar Gah, where British troops are stationed and from where Chinook helicopters frequently take off and land from the helipad.

Fortunately, as we reported at the time – in an encouraging testament to the ground work done by coalition forces - the villagers spotted the first gun and reported it to the authorities. Shortly thereafter, it was attacked by two US Air Force A-10 Thunderbolt Iis which destroyed the gun and the truck, using their 30mm Avenger cannons.

The next gun was also a ZPU-1, and again it was reported by villagers in the Nad Ali district, after it had been fired in the vicinity of the local bazaar. This one was taken out by US Air Force F-15E Strike Eagles. They first disabled the truck using strafes, preventing enemy personnel from driving the vehicle into a civilian area, and then bombed it using GBU-38s.

Although the ZPU-1 is 70s-era equipment and obsolete, with a 14.5mm calibre, it is a potent anti-aircraft weapon and could have made short work of any helicopter it hit. The rapid intervention of the US Air Force, said a coalition forces spokesman, "without a doubt saved the lives of Afghan and coalition forces".

However, the situation was to get potentially worse. We later reported, on 28 April, that another gun had been seen – this one on the 26th. This time is was a ZPU-2 - the twin-barrelled version of the guns previously reported – and very much more devastating. A Chinook would not have survived a sustained attack from this weapon.

Fortunately, as it was being towed by a farm tractor, again close to the British base at Lashkar Gah, it was taken out by a US Air Force MQ-9 Reaper, which fired Hellfire missiles. Both the tractor and the gun were destroyed.

However, it now appears that there was a fourth gun, this one reported on 25 April when it was strafed by an A-10 and destroyed. Again it was – most probably – a ZPU-2, this one mounted on a truck. The vehicle and the anti-aircraft gun were destroyed.

Thus, it seems, in the space of less than a week, the Taleban have fielded no less than four potent heavy anti-aircraft machine guns, close to a British base, the obvious intention being to shoot down a British helicopter. This is the first time that so many of such weapons have been deployed against coalition forces and could represent a new level of threat.

If the Taleban have had four of these guns, the possibility is that they could have more, and are prepared to risk all to use them. So far, we have been fortunate in that the guns so far deployed have been spotted. But the Taleban only have to be "lucky" once. A fully-laden Chinook hit by one of these guns could lead to forty or more being killed.

What is doubly disturbing is that, while the US Air Force has reported these guns – in a low key way – no mention has been made of the threat by the MoD, which has been flooding the media with "feel-good" human interest stories, avoiding any hard-edged news of the war in Afghanistan.

This presents an entirely false picture of the risks our troops face and thus fails to prepare the public for the remote but nevertheless real possibility that we could some day be confronted with the news of a helicopter disaster involving significant loss of life.

Unprepared, media and public reaction is likely to be extreme and the fall-out could very well create overwhelming pressure for the removal of British troops from Afghanistan. In one fell swoop, the Taleban could achieve a major victory.

With luck, skill and vigilance, this may not happen by the MoD bears considerable responsibility, if it does, for leaving the public unprepared, to an extent that the whole campaign is threatened. As with the famous "Blackhawk down", one Chinook down and it could be game over.