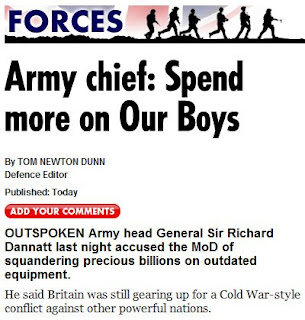 It used to be said that Sun journalists were the most skilled in what used to be called "Fleet Street". Their skill was in writing one hundred words of accessible prose what took broadsheet writers several thousand to do, while getting accurately to the heart of the story. Then the paper employed Tom Newton Dunn as defence "editor".

He, like many of the hacks today, writes up a story puffing the latest pronouncements of General Sir Richard Dannatt, missing the point completely, and thus reinforcing the paper's unenviable "comic strip" reputation, as it reduces defence matters to the status of a soap opera.

Thus does the fearless Dunn parade his superficiality under the heading: "Army chief: Spend more on Our Boys", telling us that the "outspoken" Army head last night accused the MoD of squandering precious billions on outdated equipment."

This was Dannatt preaching to a sycophantic audience at Chatham House, finally catching up with a reality largely of his own making, arguing that "Britain was still gearing up for a Cold War-style conflict against other powerful nations". But, he said, troops were far more likely over the next 30 years to find themselves fighting terror groups like al-Qaeda.

In the deathless prose of the fearless Dunn, this is translated as "Sir Richard" – there's grovelling for you – warning that "Our Boys in Afghanistan would suffer — or even fail — unless more cash was channelled towards their urgent needs."

The perspicacious Dunn then wisely informs is that this "landmark speech" was last night interpreted as a thinly-veiled attack on PM Gordon Brown's decision this week to buy 40 new Typhoon fighter jets at £60 million each. "And the hugely-popular general's comments will provoke more in-fighting between the RAF and Royal Navy over Britain's dwindling military budget."

What of course we do not get from Dunn – and, to be fair, from any other hack either – is that when it comes to "squandering precious billions", Dannatt has been right there in the thick of it, presiding over the waste of hundreds of millions on dangerously inadequate vehicles, not least the Vector, the Tellar and, to come, the Husky.

This is the man who also blocked the Army from obtaining cheap but entirely adequate helicopters for Iraq and Afghanistan in order to safeguard one of his fantasy projects, the Future Lynx, a helicopter that will cost 2-3 times a more than a suitable equivalent. It will not be available until 2014 – and not in service until 2016.

This is also the man who delayed the response to the catastrophic failure of the Phoenix UAV, leaving the Army devoid of a vital surveillance capability, preferring to wait for the advanced "Watchkeeper" project instead of insisting on buying perfectly capable UAVs off-the-shelf when they were most needed.

Most of all though, this is the man who in mid-2007, when US defence secretary Robert Gates was declaring the MRAP programme as his "highest priority" was declaring that £16 billion FRES programme was his "highest equipment priority". By July 2007, Dannatt was insisting that FRES should acquire a completely unrealistic in-service date of 2012 which, he said, was "non-negotiable", thus blocking the wholesale provision of more suitable, mine protected equipment.

Yet this was also the man who, having decided on one specific armoured vehicle to fulfil his dream, presided over an active conspiracy to block the provision of an equivalent vehicle, available off-the-shelf, the only one which could have met his 2012 deadline and which, within his own terms, could have given the Army the capability which he claimed was so desperately needed.

Now, having been largely responsible for the impoverishment of the Army, Dannatt has the nerve to insist that: "Much of our planned investment in defence is of questionable relevance to the challenges we face now and in the future. The balance of our investments remain heavily skewed towards industrial warfare. Many of these look simply irrelevant."

He also says, with not even a blush, "We must not take the commitment of today's Tommies for granted. We have an obligation to understand their needs and provide them with tools and training, not squander scarce resources," then concluding that, "We are in an era of persistent conflict. Iraq and Afghanistan are not aberrations, they are signposts to the future."

As to the latter assertions, Dannatt is, of course, playing catch-up – these very points were articulated by Robert Gates over a year ago. More specifically, Dannatt is bending to the wind, having spent most of his three-year tenure as Chief of the General Staff preaching the doctrine of the "balanced force", the very antithesis of what he is now embracing.

Nevertheless, such nuances, are beyond the likes of Dunn, Not having reported the Gates speech - The Sun doesn't do US defence politics - not having the first idea what FRES is, and certainly never having reported it intelligently, and having evaded any scrutiny of Dannatt's dire tenure over the equipment programme, Dunn is content to indulge in gushing hero-worship of a man who has perhaps done more damage to the Army than Mike "macho" Jackson.

Unfortunately, Dunn is not entirely alone in allowing Dannatt a free hand, with Thomas Harding The Daily Telegraph also offering an uncritical account of Dannatt's attempt to join the real world.

But here, in a much more measured account, Harding does allow something that Dunn, champion of "Our Boys" could never permit. He writes that Dannatt admits that Britain's performance in Iraq had led to its military reputation and credibility being "called into question" by America." Thus we also hear, via Harding, Dannatt telling us that, "Taking steps to restore this credibility will be pivotal – and Afghanistan provides an opportunity – key to doing so will be an honest self-appraisal of our performance in Iraq."

This is the man who, in December 2008, dismissed criticisms of the operation, telling us that "We have been quite clear about what we had to do and we have done it and we are going to leave in the early part of next year because the job is done". Now, at last, we are hearing a call from that same Dannatt, this time for "an honest self-appraisal of our performance in Iraq" – exactly the call made in my book Ministry of Defeat. Where we lead, Dannatt follows.

Whether the Army can rise to that challenge, or is even capable of carrying it out - with the accent on "honest" - remains to be seen. But that the outgoing CGS should at last ask for it is a step forward. One wonders though, whether his performance will be included in such an appraisal. If it is, though, you can be sure that the fearless Dunn will not report it.