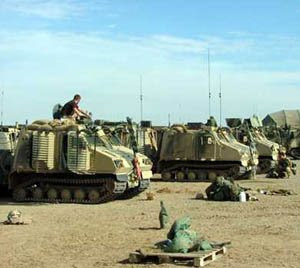 From the very start, when they were introduced with great fanfare into Afghanistan just under two years ago, we had our doubts about the Viking.

We were quick to point out that like the Pinzgauer Vector, it had very little in the way of mine protection, in what is one of the most heavily mined countries in the world.

Of course, that did not stop newspapers like The Daily Mail and The Sunday Telegraph falling in with the MoD and giving these killer machines high-profile "puffs", heedless of their vulnerabilities.

We kept banging on about this machine, while the MoD kept up its spin, imbibed uncritically by the media while parliament slept.

Despite this, we continued pointing out the dangers of this vehicle, again and again, despite the continued spin from the MoD. "Viking vehicles are saving lives in Afghanistan," it told us.

We kept pointing it out, as the casualties mounted, still banging on about its deficiencies.

But hey! We're only a little blog. What do we know, compared with those great military brains in the Army and the MoD, and the all-knowing clever-clogs of the media?

Well, nearly two years down the line, we get The Times picking up on the new equipment story. And what do we see?

The sense of urgency about providing better protection for troops was underlined yesterday when it was confirmed that 100 of the extra 600 vehicles will replace the armoured Viking tracked vehicles which only came into service in 2006 with the Royal Marines and have been deployed across Helmand province in southern Afghanistan.

Hailed as one of the most advanced armoured land vehicles when the Ministry of Defence ordered 108 of them for £60 million in 2001, the Vikings have proven to be vulnerable to landmines.

About a dozen Viking drivers from the Royal Marines and the Queen's Royal Lancers have been killed or seriously wounded from mine strikes, and steps had to be taken to thicken the armour under the driver's position. Now, under the new proposal, the Vikings will be replaced by 100 better-protected "high-mobility tracked patrol vehicles".

Then, of course, we get the band-wagon jumpers like General Lord Guthrie of Craigiebank, former Chief of the Defence Staff and now a patron of the United Kingdom National Defence Association.

Although we have not heard a word from the Noble Lord about Vikings, we are told his organisation "campaigns for better conditions for the Armed Forces." He is thus allowed to say: "Defence has been under-funded and risks have been taken with security and the size and equipping of our Armed Forces for many years." He then adds:

The Government has now been forced by events in the conflicts in Iraq and Afghanistan to urgently find additional funding, but it is too little and too late. Despite repeated warnings our services are neglected and under-resourced. This has cost lives.

That is the quality of the debate and the care the media take. The whole point about the Viking was and is that it is not cheap. This is not a matter of underfunding – more a matter of the wrong vehicle being used.

Then, having got it so consistently wrong for so long, it is far too much to expect that the media should get it right now.