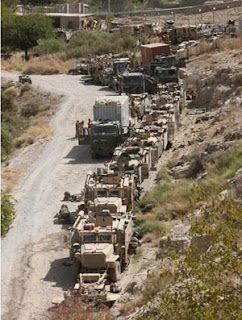 Amid all the doom and gloom, some glad tidings come from The News of the World today, under the heading "Men of Iron".

Despite not being noted for being an authoritative voice on military matters, the paper credibly reports that British troops are "FINALLY" getting 600 "bomb-proof" new vehicles, "to cut the grim death toll of Our Boys in Afghanistan."

The paper is talking about the new fleet of heavily armoured vehicles costing £500 million, the print copy showing pictures of a Ridgeback, Mastiff, Bulldog and Jackal. The piece describes the "hi-tech package" as including 100 logistics trucks based on the dependable Mastiff, 100 weapons-mounted Jackal 4x4s, 100 high-mobility patrol vehicles and "300 light support trucks with souped-up mine protection".

A defence source is cited as saying, "This investment will allow commanders to scale back the use of light Snatch Land Rovers," adding, "Defence Secretary Des Browne was determined to ensure soldiers on patrol in Afghanistan have proper armoured protection. During next year's fighting season that will finally happen."

Some of this fleet, clearly, has been planned for some time but there is some genuinely new kit here, including the "100 logistics trucks based on the dependable Mastiff". This is extremely good news, not least because it relieves the burden on infantry formations, who otherwise have to commit considerable resources to defending thin-skinned vehicles.

The exact cost of the package is uncertain. Although the figure of £500 million is mentioned, not all of that will be "new" money, but some undoubtedly is – when or if it is approved by the Treasury. 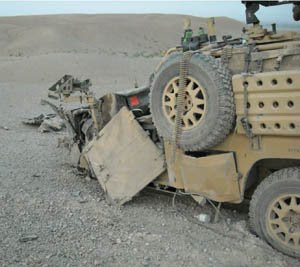 Crucially, though, it seems some of the kit must be being processed through the UOR system as the intention is to get it in theatre for the next fighting season. Too often, the Army focus is on kit for years ahead, which is of very little value to current operations (did anybody mention FRES?)

Even the new Jackals are not entirely to be sneezed at. Although we have been highly disparaging about this vehicle, it seems as if the added armour – which was never originally intended to be fitted - is doing a job. Crews have survived several hits when they might have been more severely wounded or even killed in the less well-protected WIMIK (pictured).

More kit it seems, is in the pipeline, with announcements to come once Parliament reconvenes, with some not altogether unwelcome news about helicopters.

All this, however, may be too little, too late. But then again it may not be. The armoured fleet so far deployed has been instrumental in boosting morale and vastly improving mobility, adding considerable effectiveness to ground troops.

While there have been siren calls for more troops in Afghanistan, better equipment itself is a "force magnifier" and, for once, the right choices are being made.