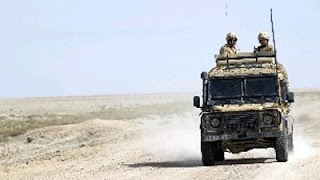 Held in reverse chronological order to a similar incident on 4 September 2006, when Gunners Stephen Wright and Samuela Vanua of 12 Regiment Royal Artillery were blown up in a "Snatch" Land Rover near the town of Ad Dayr, we now have the outcome of the inquest of Lieutenant Richard Palmer, late of the Royal Scots Dragoon Guards.

He had also been riding in a "Snatch" Land Rover in the Ad Dayr area - but on 15 April 2006, five months earlier than the Gunners - leading a joint patrol with the Iraqi Army when his vehicle had been caught in an explosion.

We are told, in the only media report so far available – on a regional BBC website - that Lt Palmer's platoon had been warned about heightened tensions in the area as a result of anger among some Muslims following the appearance of cartoons that depicted the prophet Mohammed in a Danish newspaper the previous year.

Lt Palmer had also been warned about a possible bomb in the area the day before his fateful patrol and, in the day he had been killed, had taken a "Snatch" to investigate the reports. Nothing had been found and, presumably, he had been killed on the way back.

Once again, evidence was given that – in this case – by Warrant Officer Michael Halewood, of the Royal Logistics Corp, who had investigated the blast - a Warrior "tank" could have saved the dead man and his colleagues who were injured. But the court also heard from Major Angus Benson-Blair that a bridge to the area of the patrol was passable only by Land Rover.

This is precisely the issue we were confronting in June 2006 at the height of our campaign against the “Snatch”, when ministers and other commentators were arguing that alternatives were simply “too big for Basra”. Later, free-lance journalist David Axe was to rehearse the specific issue of bridge strength, arguing that the 22-ton Mastiff was too heavy for some of the structures in Iraq.

What we don't get to hear though is whether the lightest of the MRAP series – the early marks of the RG-31 - would have been able to cross the bridge which necessitated Lt. Palmer using a "Snatch" – and that we will never know.

Here, the silence of the coroner is puzzling. Never before reluctant to recommend the purchase of extra equipment to avoid the loss of life, this time Andrew Walker seems to have accepted Major Benson-Blair’s explanation.

While he could have asked whether vehicles other than the Warrior could have been procured, in this case there is no record of him making any critical comments. Nor is there any record of him suggesting that there had been deficiencies which could have been remedied by additional equipment not then on the Army inventory.

Instead, Walker simply praised: "The unhesitating courage and unstinting grit of our troops," which, he said, "is a credit to them."

Perhaps it is this lack of controversy that explains the lack of media interest. We saw this dynamic after the inquest of Drummer Thomas Wright. Clearly, no one could expect the media to be interested in the "unhesitating courage and unstinting grit of our troops" for its own sake.