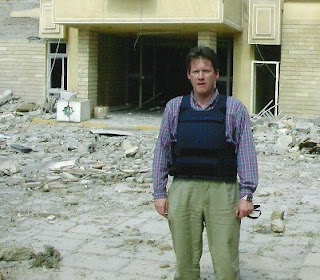 In another valuable contribution to the remarkably sparse debate on the British occupation of Iraq, MP and former Grenadier Guard Adam Holloway has published a short paper headed, "The Failure of British Political and Military Leadership in Iraq."

Holloway takes the view that the Labour Government has suborned the Armed Forces from the very top to half the way down, creating a system that often enforces what is politically convenient, not what is militarily right. This systemic failure, he argues, began with the invasion of Iraq and continues to this day. This failure, he tells us, continues to prevent us from learning from our mistakes, and is condemning us to repeat them, as we are doing in Afghanistan.

In his pamphlet, we are taken through the early political stages which led to the invasion of Iraq, against the background that, from the moment British Forces crossed into Iraq, a process of back-pedalling had begun. They were put under increasing pressure to get out, by a political leader who had committed his country to war based on his political ambitions, not the considered military advice of his generals.

We are given a useful reminder that, in the run-up to the war, the original plan had been for Britain to invade through Turkey. It was not until 24 December 2002 that the planning was switched. This, undoubtedly, affected the degree of preparedness.

Holloway then explores the vagueness of the strategic objectives for the war and the confusion between the overt objective of neutralising a perceived threat of WMD and the Bush's real objective of regime change. Caught up in fabricating reasons to invade and occupy Iraq, our leaders never stopped to set a clear and achievable goal for Britain's involvement.

The confusion and dishonesty amongst our political leaders created the central problem for our military. Post-invasion, the goals started with grand ambitions of "rebuilding a nation" and bringing peace and democracy, and deteriorated to "holding the line" so there could be "an Iraqi solution to an Iraqi problem". When even that could not be achieved, our political and military leaders decided to withdraw the troops and let the Americans fill the gap, while claiming credit for this "success".

The trouble was, adds Holloway, our leaders at the top of the MoD, the Chiefs of Staff and senior civil servants became caught up in the opaque, politicised confusion. This had a knock-on effect on the ground, where officers had a very poor understanding of the political and social dynamics of Basra. Even as late as 2008 the British HQ in Iraq was still only able to define the focus as "the consent of the population".

Then, in perhaps the strongest part of his paper, Holloway describes a "failure of moral courage", invoking Field Marshall Alanbrooke, Churchill's senior general. He had said of the Prime Minister: "the first time I tell him that I agree with him when I don't will be the time to get rid of me, for then I can be no more use to him". The contrast with those inside the MoD building today is damning and pervades even operational theatres.

In the middle of the fiercest battles in Iraq, our soldiers stood their ground and fought bravely but many of those at the top of the MoD failed to provide the Government with hard facts and choices and confront them with the strategic implications of under-resourcing the Army. Our soldiers were expected to give their lives if necessary, but those at the very top shrank from committing "career suicide" by standing up to politicians and telling them the uncomfortable truth.

Nowhere was this military spinning more apparent than in the way the campaign was directed. "The Chiefs of Staff realised that, for political reasons, the Government was never going to commit the resources needed to deal with the Shiite militias. Thus the Chiefs reasoned that if they couldn't fight and beat an insurgency, they had to redefine the problem. The politically driven Shiite insurgency was simply redefined as mass criminality and therefore a problem for the local police, not soldiers. Military spokesmen were keen to explain that Basra was similar to "Palermo, not Beirut".

Whilst this may have been temporarily convenient for the political-military leadership, the long-term consequence was that no coherent campaign was ever developed for Basra until 2008 and the political causes and objectives of the insurgency were never addressed. As an officer from the Basra Consulate put it in 2006 "what's the point in providing intelligence on the insurgency when the Government won’t accept that there is an insurgency".

There was also an aspect of pride. British officers had talked at such length about their expertise in counterinsurgency, after decades of experience in Northern Ireland and Malaya, that they could not be seen to have got it wrong.

The combination of self-delusion, hubris and ignorance was behind the disastrous decisions that were taken in Basra. Military commanders could not take a long-term view as they only spent six months in the job and no significant intelligence database was built. The result was that key knowledge was lost in the biannual handover and short-termism took over, a mentality that drove the most disastrous decision of the Iraq conflict – abandoning al-Amarah.

Over the period of Britain's involvement in Iraq, the graph - as it were - moved steadily downwards. But every six months there was a little spike of hope upwards. This reflected the departures of senior officers out of Basra at the end of their six month tours, as it had been left on a high note - as they presented the place in better condition at the end of their tour than at the beginning.

Short-termism coloured most decisions, The decisions to hand over provinces in Iraq were progressively driven by commanders who were being judged not by how well the job was done, but by how quickly. Corners were cut in other areas too. The decision was taken not to embed British military advisors into the Iraqi Army despite a clear history of this being advisable.

Thus does Holloway ask why those at the top did not stand up for what they knew was right? His answer is that, in the "super-politicised" environment that the MOD had become, a "good news only" culture began to emerge within the military – the culture of politically aware military advice. Pliant and conformist civil servants in uniform were systematically promoted at the expense of capable independent-minded officers. No one would get promoted for saying things are going badly. As a result, few were prepared to tell the Emperor that he was naked.

When some were extended in post, they were not being rewarded for military success, but for toeing the line and keeping mouths shut. As one senior and very well informed person put it: "when the most senior in the military stand up and says this is what happened, which of us can say otherwise?"

Matching military advice to the prevailing political wind is one thing, though, but when the heads of the Armed Forces start actively parroting political propaganda and burying inconvenient truths on behalf of the Government, a serious line has been crossed, says Holloway.

What remains troubling though is that commanders and political leaders seem determined not to learn from their mistakes. Commanders seem threatened by the idea of admitting failure and learning from mistakes. Thus, no one from the UK armed forces had ever thought to contact the retired Afghan Communist General who had managed to hold Helmand province for a full year after the Soviets left and who had been the great expert on running tribal militias to provide local security across the area.

When a serving TA officer published an extremely well researched and persuasive paper in The British Army Review (the Army's professional journal) called "A Comprehensive Failure: British Civil-Military Strategy in Helmand Province", which was damning of official attempts to spin failures into PR successes, the Assistant Chief of the General Staff intervened.

He issued written instructions effectively removing full editorial control of the journal from its editor and stipulated that political clearance must be sought before the publication of any such articles in the future, due to the embarrassment caused to politicians.

What is more worrying was his further direction that in the run-up to the Iraq Inquiry there must be no publication of "lessons-learned" from Iraq by serving officers, including those who were actually there. In effect, British officers are no longer free to propose critical and reflective ideas - fresh-thinking that is essential for success, if those proposals might embarrass the Labour Government.

This ghastly culture continues, concludes Holloway, endangering our national security. By continuing to bury the truth, we greatly reduce or even kill the chances of hard fought-for success.

Our troops need to be adequately funded and equipped. We must look again at how we structure our national defence. But most importantly, we need to relearn the lessons of Churchill and Alanbrooke. We need a culture that encourages a system with integrity, independence and a robust relationship with whichever Minister happens to be in the MoD this season - and the rather more able ones next.