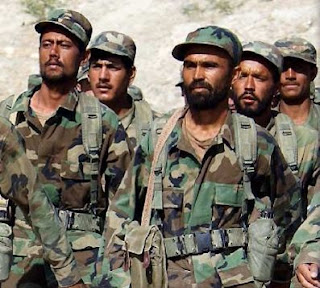 The Sunday Times laments the poor state of the Afghan security forces, with a long piece headed: "Corrupt, untrained, underpaid, illiterate: the forces waiting to take over." This is by no means the first article to draw attention to the parlous state of the forces, on which the Coalition exit plan entirely depends.

In fact – as you might expect – the problem is very far from new. In 1900, Afghan ruler Abdur Rahman was recalling the state of the army he had inherited from his predecessor, noting that it was "defective in certain respects" ...

... one of them being that the soldiers did not get their pay regularly, and had certain privileges granted them of extorting money from the subjects without any punishment being inflicted on them for so doing. The officers were lazy, steeped in indulgence and vices of all kinds, gambling, opium-smoking, Indian hemp-smoking, and other bad habits which cannot be mentioned ...

The army was in such a condition, he ventured, that it could not stand against the English army half so well as any ordinary chief.

By1900 – ten years after he had assumed the Crown - Rahman claimed (with the benefit of a considerable English subsidy) that his army was "properly organised upon the modern European military method". His soldiers were paid regularly. Every cavalry regiment and artillery battalion was complete with its sappers and miners for trench work, engineers, bands, tents, medical corps, etc.

At that stage, Rahman wrote that he was making every effort to provide himself with 1,000,000 million fighting men, armed with the most modern weapons and war material. He died a year later, his dream unfulfilled. In 1919, when his successor launched the third Anglo-Afghan war, he was only able to muster 50,000 troops.

Confronting them was Lt-Gen George Molesworth, who gave the following evaluation of the Afghan army:

Artillery was pony-drawn, or pack, and included modern 10cm Krupp howitzers, 75mm Krupp mountain guns and ancient 7 pounder weapons. There were a few, very old, four-barrel Gardiner machine guns. Ammunition was in short supply and distribution must have been very difficult. For the artillery much black powder was used, both as a propellant and bursting charge for shells. The Kabul arsenal workshops were elementary and mainly staffed by Sikh artificers with much ingenuity but little real skill. There was no organised transport and arrangements for supply were rudimentary.

Such is how it has always been. Most serious fighting by the Afghans has always involved large numbers of tribesmen, organised and led by their chiefs – either acting alone or in support of the Afghan army. Not ever in modern times has the state been able to field a credible force.

Patrick Cockburn, commenting in The Independent on Sunday on the late Obama plan, notes that he envisages training 100,000 new Afghan soldiers and 100,000 new policemen over the next three years.

But, asks Cockburn, where are these recruits to come from? Given the high desertion rate, the combat strength of the Afghan army is reportedly only 46,000 troops in a country that is larger than France.

Furthermore, he warns, these troops, and particularly the officer corps, are already disproportionately Tajik, the ethnic group to which a quarter of Afghans belong. The US can only increase the military strength of the Afghan state swiftly by skewing it towards the Tajiks, who were always the core of opposition to the Taliban. This will increase sectarian hatreds.

And this is what is supremely worrying about the current coalition military strategy. Its leaders, Brown and Obama included, have convinced themselves that they are going to be able progressively to hand over responsibility to the Afghan security forces as soon as 18 months. They will then take the load and maintain peace and security.

But, as The Sunday Times article points out, of the police alone – citing a police commander, talking about his recruits: "They start from such a low level. I need five years ... With all the attention of the international community, maybe three years minimum." At that is given that the system is being organised properly, which it is not.

The plan is moonshine. Coalition leaders are locked into a fantasy of their own making, relying on the creation of mythical armies with false capabilities, dreams that will never be realised. Even in decades and with more money than the US could afford, there is not going to be an effective Afghan security force in five or even ten years time.

One can live with a degree of optimism and hope, but the current plans really are based on fantasy. Nothing good can come of them.