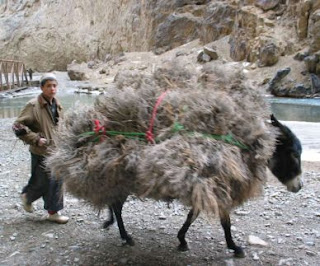 The paper adds that "the incident has alarmed military chiefs concerned that the Taliban are now using desperate methods to attack occupying forces." I sincerely hope that this is ill-informed rhetoric on the part of the paper. The use of a "donkey bomb" was reported by The Times in April this year, so it hardly suggests that the Taliban is now - or at all – using "desperate methods".

In fact, "animal-borne" IEDs are not new. One was recorded in Columbia in September 2003, used with devastating effect. In 2006, the Palestinians were reported to be experimenting with explosives-rigged stuffed animals.

In Iraq, animal carcasses were not infrequently used to hide IEDs and in August 2005 were reported to be rigging live dogs with explosives. But even that was not new. In the Second World War, the Germans experimented with dogs carrying radio-signal initiated bombs to destroy Allied tanks.

Nor is the use of live creatures confined to "terrorists". In one of the more bizarre scenarios dreamt up by American scientists during World War II, hundreds of tiny bats, each wearing a small napalm bomb strapped to its chest, were to descend on Japanese cities before exploding and spreading uncontrollable fires.

The experiments came to an abrupt end in 1944 when, during one test, the direction of the wind changed, blowing the bats back into the US Army's headquarters, which caught fire. In another incident, some bats hid under the car of a high-ranking US officer causing it to explode.

That their use was considered by US forces in 1944 could hardly have been a sign of desperation, and neither can the use of donkeys by antagonists in Afghanistan be thus considered. It merely reflects the inventiveness and flexibility of guerrilla forces when up against a better-equipped enemy, in a country where heavily-laden donkeys are more common than cars.

The worrying thing is that we see a narrative being created here. The local introduction of an old tactic – not met by ae particular batch of troops – is reported as "new" and then interpreted as a "sign of desperation". By such means to we (possibly the Army, and certainly the media) fool ourselves into thinking that we are achieving something more than is actually the case.