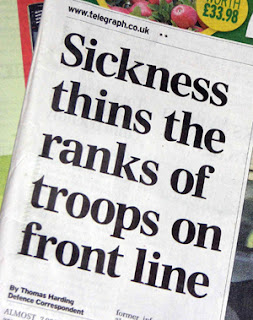 Alright, it is the Torygraph and that paper is pushing the Conservative agenda, that our troops are hard pressed, the favoured word these days being "overstretch".

Thus, we cannot be surprised when the paper splashes on its front page the headline, "Sickness thins the ranks of troops on front line".

The text (from this and 52 other versions, as recorded by Google news) tells us that almost 7,000 infantrymen are unfit to fight, leaving front-line troops "dangerously exposed." One in 14 soldiers is sick or injured at a time when every regiment of 600 faces a shortfall of 100 men because of problems with recruitment and the numbers leaving the Army.

Troop shortages, the piece continues, are so acute that at least six battalions are being sent to do the job of four battalions when the next brigade deploys to Afghanistan this spring.

Then we get Liam Fox, the shadow defence secretary, pushing the Tory line, saying that the Government had overstretched the Armed Forces to the point where it produced "some very real consequences on our abilities to fight on the front line". The shortages could "endanger the safety of personnel" and indicated a "retention crisis" in the military, he said.

The base information, it turns out, was obtained by the Tory MP Patrick Mercer, via a series of Parliamentary Questions, most recently this one, giving the "former infantry commander" licence to say that, "This is an albatross that hangs over commanding officers' heads." Mercer then adds, "In times of peace it is fine but in war it is a complete and utter liability," declaring that under-manning was "crippling the Army" and the situation had to be addressed immediately.

Only at the end of the piece do we get the standard MoD rebuttal, an undoubtedly weary Army spokesman saying that: "The forces pride themselves on their fitness and are well known for it but there will always be a small element suffering from sickness or injury and not fit to deploy to an operational theatre."

He also says that the use of elements from a number of battalions was "not new" and battle casualty replacements were "provided as and when required by the Chain of Command".

Of course, the Army would say that, so the statement has all the status of a ritual denial that carries little weight. But, the fact is that the situation is not new and, furthermore, Mercer knew that to be the case.

If you cast your mind back to March 2002, that was when then defence secretary announced that Britain was to send a 1,700-strong commando force to Afghanistan to help American troops root out remnants of al-Qa'eda and the Taliban. It was to be the biggest deployment for combat operations since the Gulf war, then eleven years previously, and Hoon warned MPs to expect casualties.

"We will be asking them to risk their lives," he said. "Their missions will be conducted in unforgiving and hostile terrain against a dangerous enemy." Hoon particularly emphasised the troops' fighting role, compared with the peacekeeping duties of the 1,800 British troops operating around the Afghan capital, Kabul.

A month later, Mercer was on his feet in Parliament, contributing to a defence debate, having just returned from Afghanistan, where he had spent some time with the British troops deployed there.

By-the-bye, he tells us he was due to have lunch with the commanding officer of an infantry battalion but had been informed by his adjutant that the man was "he's too busy to lunch with you because he's lobbying to get his battalion to Afghanistan." Added, Mercer, "The Royal Welch Fusiliers are dying to go to Afghanistan" – a rather unfortunate choice of phrasing.

The 1st Battalion of the Royal Anglian Regiment is well recruited in a difficult part of the country for infantry recruiting. Fortunately, my constituency lies in Nottinghamshire, on the edge of Royal Anglian country. It is interesting to see how those two battalions approach the problem of recruitment. Despite the fact that the 1st Battalion is only marginally under strength, it has had difficulties deploying to Afghanistan and finding the manpower that it needs.

The commanding officer - strangely enough, quite well known to me - pointed out that he had to leave almost 40 men behind in Pirbright because they were sick. They could not be deployed on operations not because of temporary illness, but because of chronic difficulties for which medical discharges could not be procured. The soldiers were capable of sedentary duties, but there are not many sedentary duties to perform in an infantry regiment. So the regiment called on soldiers from its battle group - men of the King's Royal Hussars - to help them with the problem.

So there it is, nearly six years ago, Mercer is noting that, to overcome the problems raised by the long-term sick in battalions, commanding officers call in troops from other regiments to make up the numbers. This is on the eve of major operations in Afghanistan and, interestingly, a fact that Mercer finds quite unremarkable. Equally, he is well aware that each formation comprises a number of longer-term sick, which again he finds unremarkable. And, having delivered the information without comments, he goes on to say:

The commanding officer also pointed out a fascinating fact … The battalion spent two years serving in Londonderry, which made it less than enthusiastic for other tasks. The deployment was gruelling, not very exciting and numbers had fallen. Yet as soon as the news spread through the battalion that it was to deploy to Afghanistan, and 1 Royal Anglian realised that it was going to be allowed to do a task that had been reserved for the units of 16 Air Assault Brigade and that the two-tier Army was being put on the back burner, a dozen men withdrew their notice to sign off, became good, loyal and motivated soldiers again, and were slavering for operations.

It was clear to the officer that part of the retention problem, at least as far as he was concerned, turned on the tasks that the battalion was being given. The men understood two years in Londonderry, but - by golly - they preferred a good, exciting tour in Afghanistan.

This latter information is fascinating and gels very much with the findings we reported in November last. Soldiers (of all ranks) are heavily influenced by the tasks they are allotted, and the experience is that they are as likely to leave the Army because they are not being deployed, as leaving because of the tempo of operations.

Speaking recently to a journalist who had just returned from Iraq, he told me that another major problem was the high pay offered by security "consultants" – so generous that the Army was haemorrhaging men, who found it more rewarding financially to work for them.

The point, of course, is that the issues raised by Mercer in today's Telegraph are ones that existed six (and more years ago). They were unremarkable then and are of no more importance now. That they assume prominence on the front page of a daily newspaper, with 52 other journals rushing into print with the same story, is a reflection not of the gravity of the situation but merely because it fits the current political narrative. This, no more and no less, is mischief-making.