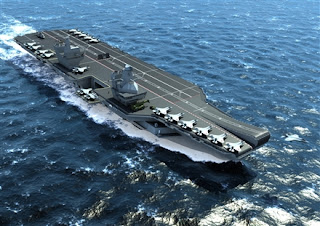 "Money is squandered on equipment that is useless in either Iraq or Afghanistan - or in any foreseeable theatre," writes Simon Jenkins in The Sunday Times today, under the heading, "Lovely new aircraft carrier, sir, but we're fighting in the desert".

For such heresy, he gets a good kicking on the unofficial army forum, not least as some of the posters are able to pick him up on points of detail which dilute the effect of his comments.

For instance, they say, in the early days of the Afghan conflict when the infrastructure to support large numbers of land-base combat aircraft did not exist, troops relied for their close air support on US carriers out in the Indian Ocean. Even today, US Navy and Marine carrier-based airpower continue to provide support in Afghanistan, with a little help from the USAF which suppliers the air tankers.

Where all these critics go wrong, however, is that, in picking on the details, they miss the main point of Jenkins's piece – that money is indeed being squandered. Here, Jenkins has a certain amount of insider information, which he shares with us. He writes:

What is clear is that this government made a colossal error on coming to power in 1997-8. In the Strategic Defence Review (on whose lay committee I served), George Robertson, the then defence secretary, and John Reid and John Gilbert, his junior ministers, flatly refused an open discussion. Having been told to "think the unthinkable", the review's authors were told that the three biggest and most contentious procurement items inherited from the Tories were sacred.

They were the Eurofighter project (£15-£20 billion), the new aircraft carriers (£4 billion) and their frigate escorts, and a replacement for the Trident missile and its submarines (£20 billion). These pet projects of the Royal Navy and RAF were protected so new Labour would not appear soft on defence. There was no consideration given to the equipment needs of Tony Blair's more interventionist foreign policy. The government decided, in effect, to pretend that it was still fighting the Russians (and possibly the Germans).

Those decisions locked the procurement budget for more than a decade. Above all they shut out the army, on which British defence activity has depended ever since. The army’s unglamorous but urgent need for battlefield helicopters and armoured personnel carriers was ignored. So, too, were supplies of such things as grenade launchers, field radios, body armour and night-vision equipment. This year the Eurofighter, carrier and Trident projects all came on stream at £5 billion annually between them and the defence budget has hit the predictable wall.

This historical perspective raises interesting questions, as to whether in 1997 the newly appointed Labour government had really thought about defence, other than in terms of avoiding criticism from entrenched lobbies and side-stepping a protected political fight.

However, Jenkins does rather seem to neglect the effect of the St. Malo agreement in December 1998, when Blair – amongst other things committed to ensuring that, between them, the French and British governments would have one battle-ready aircraft carrier group at sea at all times.

With the parallel commitment to the ERRF, primarily dedicated to expeditionary warfare, this – as much as anything – set in stone many of the expensive procurement projects which are currently dragging down the defence budget.

Although Jenkins avers: "There was no consideration given to the equipment needs of Tony Blair's more interventionist foreign policy," at that early stage there is no sign that Blair had then formulated what was to become the defining policy of his tenure. In fact, it was his "European" policy, as well as the carry-over of Conservative-initiated policies, that is creating many of the current problems.

Whatever their genesis, however, Jenkins is undoubtedly right when he states that, whenever "cuts" are in prospect, "The first to howl are the chiefs of staff." Thus, he tells us:

It is customary at such times for them to stand as one, arms linked like Roman legions in a square. Yet they will never adjudicate on priorities. An admiral will not doubt (in public) the RAF's need for more jet fighters. A general will never question the need for carriers. An air marshal will cast no aspersions on Trident. All they will do is sing in unison, "No defence cuts".

For some time now, it has been apparent that the equipment plans for the armed forces were unsustainable. Now that the forces are committed to operations in Iraq and Afghanistan, much of what is on order or is coming though is indeed "useless" for either theatre.

There were, therefore, two options to bring the procurement budget back into balance. One was to make deep cuts, cancelling one of more of the major projects, thus eliminating the overspend and making money available for operations. The other was to make cuts across the board, downsizing all or most of the projects and/or delaying their timetables in order to spread the financial burden over more years.

Although the first option would have been preferable, Jenkins indicates (as does his colleague in the business section) that ministers have taken the second route. "Every cut is across the board," Jenkins writes, adding:

Gordon Brown has let it be known that there must be no talk of cancellations, only postponements. Carriers may be delayed, Astute-class submarines may be reduced from eight to four and Type 45 destroyers from 12 to six. The number of Eurofighter Typhoons on order may be slashed. Strategy can go to the wall but not politics…

From there, Jenkins addresses much detail. Some of his assertions are questionable and others debatable, but his net conclusion is on the right tracks: "Money is squandered on equipment that is useless in either theatre - or in any foreseeable one. For want of that money, equipment vital to victory is forgone."

"In a sane world," he argues, "this might be cause for a revision of priorities within the defence establishment. Instead, the brass hats continue to squabble to protect their precious toys and politicians lack the guts to bang their heads together."

Thus, without any serious or intelligent debate, dominated by demands for "no cuts" and "more money", it seems the worst of all possible decisions has either been made, or is in the process of being made – effectively a determination to spread the misery equally, to avoid major confrontations.

That would mean that the defence budget continues to be saddled with useless projects, while there will be no pool of the cash that is needed to re-equip and restructure operational forces to meet the very special needs of counter-insurgency operations.

This is the worst of all possible worlds.