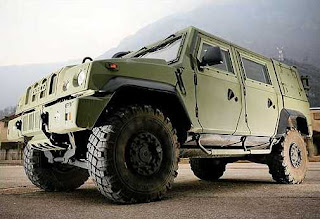 Not a few of our readers brought to our attention the long piece by Andrew English in the motoring section of The Daily Telegraph yesterday, about the Panther FCLV – badged as the Iveco LMV. With so much time taken with analysing the Philippson incident, however, we did not have enough time to review it until today.

Andrew English is an experienced journalist, an expert in road-testing cars and, in a past career, was directly involved in developing Army off-road vehicles. Furthermore, he has quoted myself, Defence of the Realm and Christopher Booker – as well as Ann Winterton – so we cannot be too rude about him.

Inasmuch as he has also supplied a great deal of information about the Panther, which we did not know, English has also done us a service. And he is not entirely unsympathetic to our view of this machine although, unfortunately, his overall view of the machine is positive, making it something of a dangerous "puff" for Iveco.

Strangely though, the main area in which he shares our view is criticising it for insufficient payload and seating capacity. Nominally a five-seater, English tells us, the Panther will have four, or even three, seats depending on their role. This restricted seating and the relatively low payload of 2,866lb/1,300kg is pretty meagre, he writes. Indeed it is pretty meagre for a vehicle weighing in at over seven tons.

But, while lauding the protection the vehicle gives, English does not make the connection when he writes that "the special shape of the chassis means a 1,322lb (600kg) V-shaped mine plate can be fitted underneath to protect the occupants, without seriously affecting the off-road capability." 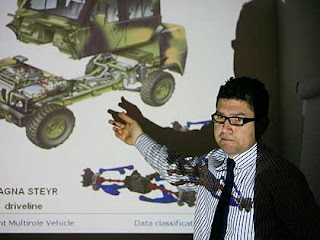 But it is one of the pictures (right) accompanying the piece that demonstrate how the Panther design is fundamentally flawed – accounting for much of the weight. In that picture, we see a more or less conventional ladder-frame chassis, on which is mounted a "safety cell", and under which is bolted the 600kg or armour.

In a more advanced design – such as that adopted by the RG-31 and the Cougar – however, a monocoque structure is adopted, the v-shaped armoured shell also serving as the load-bearing structure to which the transmission and running gear are fixed.

It is this design which gives the exception strength and protection afforded by these vehicles, while offering huge weight-savings, and enables the RG-31 to come in at a similar weight to the Panther while offering better protection and more carrying capacity.

English makes much of the off-road performance of the vehicle, and its ability to climb a concrete ramp in the dry, with a nicely roughened surface (below, left), allowing him to declare that, "what is unassailable, in our view, is that the LMV is a thoroughly modern vehicle that will go to places even Land Rovers would be hard pressed to reach while protecting its passengers during a modern insurgent war."

In the protection stakes, English recounts how the Panther is tested against a standard Russian anti-tank mine, a video of which he is shown:

The LMV rears up in the air like stricken horse, its bumper rising about 10 feet and pointing skywards at an angle of 45 degrees. It twists to one side and lands with a shocking crash as pieces of scenery and vehicle continue to cascade down like hail some five seconds after the detonation. Although the wheels are still attached, the plastic bonnet has disappeared and wires and pipes hang out of the engine bay like the entrails of a dead animal, but the passenger safety cell is undamaged.

However, that is one mine, while the Taleban have been known to use two or more stacked mines, or have augmented the explosive power with the addition of a couple of mortar rounds – a technique widely used in Rhodesia. What is shocking is the description of the vehicle rearing up so high, demonstrating that little in the way of deflection technology has been used. Nor, with the wheels still attached, does it suggest that the most has been made of using sacrificial components which can be blown off by an explosion, thus absorbing energy.

The test itself, while impressing English, though, suggests that the Panther is at its limit being challenged with a single mine and has no potential to resist more – as against the RG-31 which can resist two stacked mines under any wheel without injury to the crew, and the Cougar which successfully resisted a 300 lb IED, from which all the crew walked away with superficial injuries. Yet Iveco talk about their vehicle's ability to resist a 50kg IED, as if that was something very special.

Nevertheless, English suggests that the vehicle – with 120 delivered so far to the British Army – should be deployed to Iraq or Afghanistan as soon as possible, although he evades the question as to the use to which it should be put.

Armed with only a 7.62mm GPMG on an "Enforcer" unstabilised remote weapon station mount – which cannot deliver accurate fire while the vehicle is on the move - it cannot replace the Land Rover WIMIK, with its .50 cal M2 machine gun as well as the GPMG. Nor, with a seating capacity of three, can it be used as an adequate substitute for the "Snatch" which, in its patrol/personnel role can carry up to six troops. 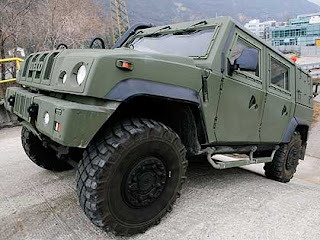 For sure, it can be used as a command vehicle, replacing either the WIMIK or the Snatch (or even the Pinzgauer) when used on that specific role, but that raises the spectre of commanders riding in a better protected vehicle than the troops they will be commanding.

Conversely, should a Panther be used to accompany Mastiffs, the reverse will apply, the commander potentially being driven in the least protected vehicle in a convoy, and flagged up as an obviously high value target at the same time.

Another issue of concern, which English himself flags up, is the basic instability of the vehicle, with several "roll-overs" having been reported while in the hands of expert Army testers. Given that, with the Land Rover in the hands of inexperienced, testosterone-driven soldiers, there have been a distressing number of roll-overs, the incidence with this vehicle, if widely introduced, might well increase.

In a way, though, it was inevitable that English should have written his piece in the way that he did. He is, after all – despite his background – a motoring correspondent, and was there to write up the test as he found it. He could not reasonably be asked to carry out comparative analyses or assess the limitations of the vehicle in its projected roles.

What he does point out though is that it was ordered in 2003 and is still not yet in service. Had an alternative like the RG-31 been bought, it could have been in service now for several years, saving lives rather than keeping Iveco in business selling a fundamentally flawed and overpriced vehicle with very little real tactical value.