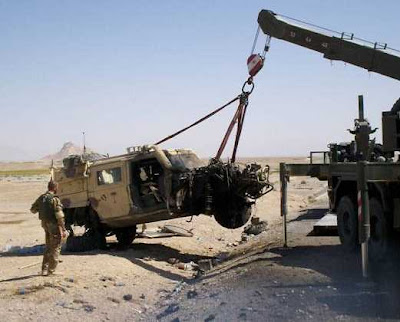 This previously unpublished photograph shows an Iveco Panther (or what is left of it) after a mine strike in Afghanistan. Clearly seen is the extensive damage to the front end, but the vehicle has also lost a rear wheel. More disturbingly, from the intense blackening of the interior, the glazing of the off-side armoured glass (seen in the picture below right) and the absence of the supposedly "mine-resistant" door, the blast has penetrated the so-called "safety cell". 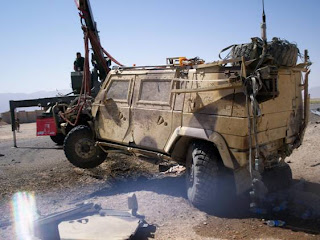 We have no information as to the fate of the crew but, from the evidence of these photographs, it is highly unlikely that they escaped without injury. And, although the makers of the vehicle claim that no one has (yet) been killed in a Panther (or LMV, as they call it) – this incident could have been so recent that deaths cannot be ruled out.

Only last Saturday, however, this vehicle was given a laudatory write-up by The Daily Telegraph motoring correspondent, Andrew English. "The Iveco LMV," he wrote, "could be the ultimate Chelsea Tractor, but the British Army needs it more than you do."

Concluding his long piece, English told us that Iveco had now delivered 120 LMVs to the MoD and "officially there is still no word as to whether they will be deployed in Iraq or Afghanistan". He had, however, been given to understand that they might be used in Iraq soon and he thus suggested that "soon is not really soon enough".

English also tells us that the LMV is already in action with Italian, Belgian, Norwegian and Croatian forces in Afghanistan and the Lebanon. "This is a vehicle for putting yourself directly into harm's way", he adds, writing glowingly, "… and then spitting in its eye", before reflecting that, "it's hard not to dwell upon the bravery of the men and women who will doing exactly that in a corner of some foreign field." 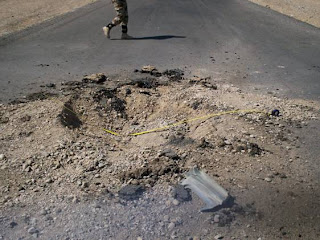 Well, the crew of the vehicle illustrated put themselves "directly in harm's way" in a corner of some foreign field. They were exposed to what appears - from information given to us and the crater (illustrated) - to be a single mine. Clearly, the primary point of impact was the front wheel – a relatively modest challenge and one which even a "Wolf" Land Rover can survive, as we have illustrated in several previous posts (for instance, here). Yet, evidently, this vehicle failed the test.

Not for nothing did we label Andrew English's well-meaning work, a "dangerous puff". It praises a vehicle which, although affording some protection to the troops, is still dangerously vulnerable and, quite simply, not up to the job. 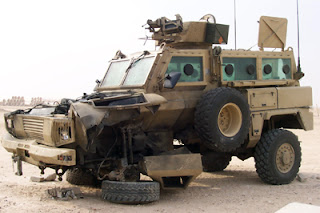 If a picture is worth a thousand words, this is more than adequately demonstrated by this picture (right) of a USMC RG-31. When we first saw it in June 2006, we were certainly convinced of the value of a dedicated mine-protected vehicle, and this vehicle in particular.

Not only did we publish the picture on our blog (originally on EU Referendum), but also, simultaneously, Christopher Booker published it in his column, effectively kicking off our high-profile campaign against the ill-protected "Snatch" Land Rover. This was to culminate only a few months later in the MoD ordering 108 mine protected Mastiffs, which have since saved many lives.

Although we have no complaints about the Mastiff, the value of the RG-31 was evident from the above photograph, from the technical specifications (which certified it as proof against two stacked 7Kg anti-tank mines under any wheel) and from other photographs and reports. It is no surprise, therefore, that we favoured this proven vehicle.

What makes the contrast so piquant is the rather murky history of the Panther procurement. When it was ordered in 2003 by the MoD, as we subsequently reported (and here), it had been chosen through which even English acknowledged was "a highly imperfect competition", one which we found more than a little suspicious. 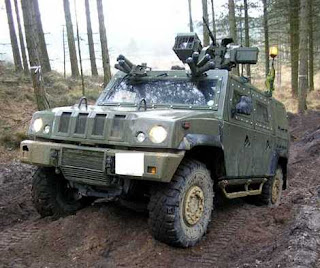 Crucially, the Panther – then only a prototype – had been entered at the specific request of the MoD, after the short-list had closed, competing against other vehicles which included the RG-31. Yet, despite the RG-31 being cheaper, better protected and more capacious (the Panther offering limited space), the MoD chose the very vehicle that it had entered into the competition, in breach of its own procurement rules.

Sadly, had the RG-31 been chosen then, as a proven design already in production, it could have been in service certainly by the end of 2004, and could readily have been pressed into service to replace the desperately vulnerable "Snatch" and WIMIK Land Rovers.

In US and Canadian service, the RG-31 has already saved many lives, so much so that the US Army recently announced that it was preparing to send another 500 to Afghanistan to protect its troops there. 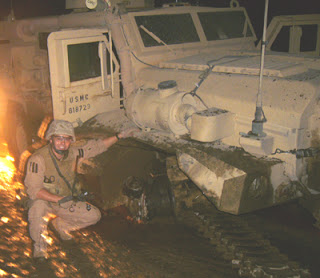 For sure, the RG-31 is not perfect, and there have been some deaths amongst the crews riding them. For better protection, we would need the Cougar which – as the above illustration shows – shrugs off the sort of impact that has totalled the LMV shown. In the incident where this Cougar was damaged, the crew were uninjured and they were able to drive it out of the killing zone. The vehicle was back on the road a few days later.

Instead of these, however, we have ordered 401 Panthers for the price of £166 million and, five years after they had been ordered – longer than the entire active phase of the European campaign in the Second World War - only 120 have been delivered. And still, the in-service date is not until November this year.

Mr English, therefore, might be impressed with the vehicle, believing that "the price is not unreasonable given the protection it provides", but we have never been convinced – and have said so many times (for instance, here, here and here).

In fact, the true price of the Panther is more than just money. In being chosen above the more capable RG-31 or Cougar, it has already cost many lives and - if the photographs we have published today are any guide – putting it into service in either Iraq or Afghanistan will cost many more.