It was a Snatch! 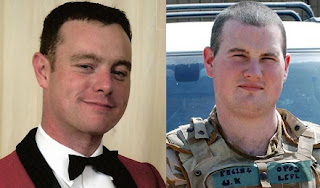 The two soldiers, L/Sgt Chris Casey and L/Cpl Kirk "Rederz" Redpath, who were killed by an IED in southern Iraq on Thursday, were in a Snatch Land Rover.

This, we speculated on in our earlier piece and the fact is now confirmed on the MoD website, with additional detail in The Telegraph.

The troops were providing "top cover" in the Land Rover, which means they were in the most exposed position. The paper says they were "killed instantly", adding that they were on their first escort duty for a convoy driving up from Kuwait on Thursday night when the attack happened. It adds, "Dozens of British troops have been killed inside the lightly armoured Snatch vehicles which are being replaced by the more robust Mastiff trucks." 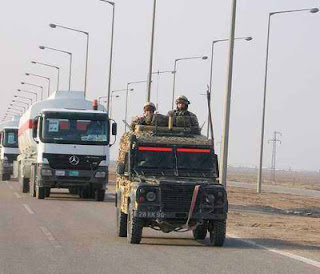 This is nothing short of an outrage. As our archive picture shows, the convoy route from Kuwait to Iraq is a motorway class road and, while there are acknowledged difficulties with the size of the Mastiff in some locations in Basra, this route does not present any such problems.

There can, after all this time, be absolutely no excuse for sending troops out in highly vulnerable vehicles when a suitable alternative exists. But, of course, with the delays, lethargy, bureaucracy and everything else that typifies the MoD and the upper echelons of the Army, there are not enough Mastiffs to go round - many of them still being prepared for operations in the UK depot (see below), at an excessively leisurely pace. 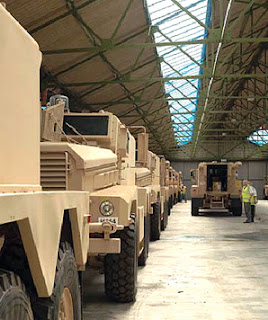 Thus, while the actual deed – murder, to give it is correct name – was the action of the terrorists, the MoD and Army must also take a huge share of the blame for these soldiers' deaths. And, as we have pointed out before, they sap the will of the nation to support the fight, with the consequences that are all too apparent.

So, while the MoD fritters away its money on "toys" for the RAF and new carriers for the Royal Navy, and while the Army brass wet their knickers in excitement over the prospect of buying expensive new APCs, all under the name of FRES, our troops die, and they die and they die. Hundreds more are horribly mutilated, their lives wrecked forever.

All this is because these vainglorious, useless organisations elevate their own ambitions and concerns above their primary duty of safeguarding their own people. For their collective failure, which includes the media, they really, really should rot in Hell.