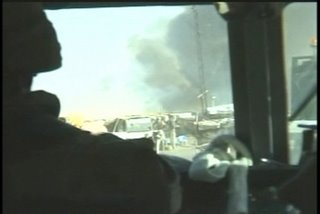 So reads the headline (or part of it) from the Calgary Sun, Canada, with a full account in CTVNews, its report bearing the headline "Canadian convoy attacked on 'Ambush Alley'".

We are, as you might imagine, writing about Kandahar city again, where there has been yet another suicide bomb attack, this time with a fortuitous outcome. In fact, "fortuitous" barely begins to describe it. One casualty, Cpl. Robert Chafe, suffered a cut on the side of his mouth and on the little finger of his left hand. The other, Master Cpl. Greg Keeping, was slightly hurt in the leg.

But we are doing much more than just writing about this incident. In this post, we shall try (and probably fail) to pull together some of the many ideas and arguments being explored as to how we should fight (instead of losing) our battles against insurgents. 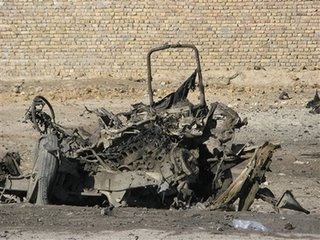 For the moment, though, we are able to start the discussion with a remarkable photograph because, riding in the convoy was a Canadian TV crew. It was just two vehicles behind the targeted truck and able to capture the incident. The first picture (top left) shows the scene seconds after the bomber had struck. This second one (right) shows the suicide bomber's vehicle, illustrating the force of the explosion to which the troops were exposed. 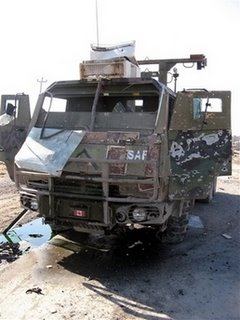 The third picture of our sequence shows the truck that was hit. It can immediately be seen that the cab is armoured, with a heavy armoured glass windscreen, which undoubtedly saved the lives of the men behind it.

Not so the lives of two Afghani civilians who had the misfortune to be beside the truck when the bomb went off - a graphic illustration of the effect of the bomb on unprotected people and, crucially, yet more evidence of the indiscriminate nature of the bombing. The Taliban have shown time and again that they are entirely unconcerned about civilian casualties, be they men, women or children. 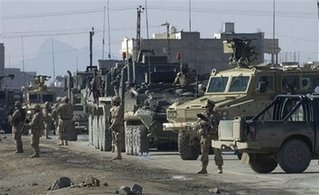 The fourth picture in this sequence shows the convoy in a long-shot, the composition of which indicates why the truck was targeted. Bombers are known to go for the most vulnerable targets and here it can be seen that the convoy escorts are the now-famous RG-31s. Attacking these would be fruitless. The other vehicle in view is an armoured Bison APC, a type that has proved vulnerable to attack when the crew ride with opened hatches - but not on this occasion. This time, in a line of unpromising targets, the truck must have looked the most vulnerable. 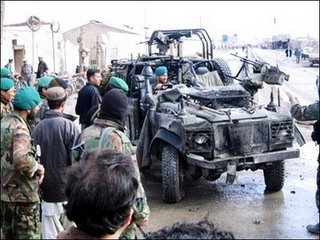 Compare and contrast with the unarmoured British Land Rover targeted by a suicide bomber on Sunday, an incident in which three Royal Marines were injured - one seriously. This shot shows an Afghani policeman attempting to drive the vehicle after the attack, demonstrating - as indeed does the visible condition of the vehicle - that the damage was relatively modest. Yet, in the absence of effective armour, far greater injuries were caused than in the attack than on the armoured Canadian convoy.

This does point up an issue that we have rehearsed time and time again - that we must have more and better armoured vehicles. But we are not talking about any armoured vehicles. They need to be designed specifically to deal with the technical threat of improvised explosive devices, whether in the form of roadside or suicide bombs. 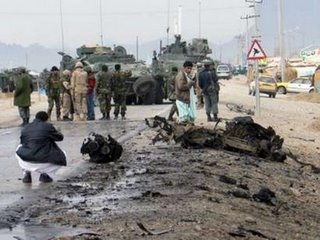 That much is evident from a less happy scenario - another suicide bomb attack in Kandahar, this one on 27 November when two Canadian soldiers riding in a Bison APC were killed. The Light Armoured Vehicle (LAV) - as it is known - is a "conventional" wheeled armoured vehicle, one designed for the European battlefield. Its fatal weakness - in common with most vehicles of the type - is that it is not designed to be operated in a fully closed down condition for long periods of time. Visibility is restricted and crew comfort (especially when it is hot) suffers. By any measure, this equipment is far from ideal for use as convoy escorts or as patrols in counter-insurgency operations.

On the other hand, yesterday, we read reports of yet another Royal Marine being killed (the 42nd British servicemen to die in Afghanistan) and one injured, but this time in what amounts to a conventional attack. The casualties arose when UK troops mounted an offensive on a Taliban-held valley, attacking the village of Garmser. Despite being elite troops, however, backed by airstrikes and artillery fire during the 10-hour battle, they were forced to withdraw after the Taliban launched a ferocious counter-attack with heavy weapons and tried to outflank the British troops. 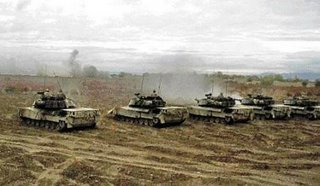 Here, though, the Canadians - who have scored so well by using RG-31 blast-protected vehicles for their patrols - are again ahead of the game. Having been fully committed to offensive operations throughout the summer, they have learnt from their experiences and introduced Leopard tanks into the equation. On the other hand, the British - with theoretically a more experienced, elite cadre of troops - are committing what is in fact light infantry to a conventional attack, without armoured support. They are perhaps forgetting that the tank, in its original inception, was an infantry support weapon.

What emerges from this is that, effectively, we need two armies - one capable of fighting a largely conventional war and the other specifically equipped to fight insurgents in a mainly urban environment. In equipment and and function, the two roles are so different that they hardly seem compatible. 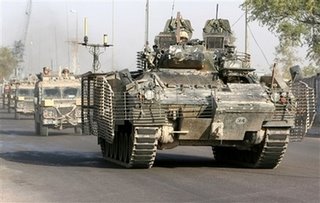 Looked at this way, one is able to see how ill-equipped the British are. In Iraq, they have a largely conventional army, designed - as we have observed before - to fend off mass armoured attacks by the Warsaw Pact in northern Europe, augmented by equipment developed for dealing with terrorism in Northern Ireland. Quite how inadequate this mix has become is apparent from these photographs taken last Sunday in Basra. 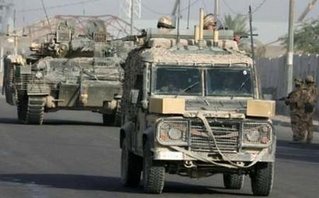 Where once we used to be able to send out foot patrols, conveyed to their locations in unarmoured Land Rovers, we have graduated to 3-vehicle armoured "Snatch" Land Rover patrols and now, as the security situation has deteriorated, the numbers have had to increase. But, the Land Rovers themselves, which were once used as convoy escorts, must now themselves be escorted by Warrior Mechanised Infantry Combat Vehicles (MICVs) front and rear.

On the other hand, for offensive operations in Aghanistan, such as the Garmser attack described above, the Warriors would be ideal, especially if they were backed by their natural partners, the Challenger II Main Battle Tank. That is not to say, of course, that tanks would be suitable for all operations, but commanders are not being given an option. There are no heavy tanks available to the British. 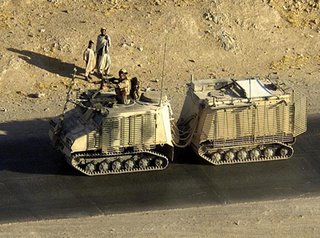 Apart from a few light tanks, the only tracked armoured vehicles issued to the Royal Marines in Afghanistan are the BvS10 "Vikings", delivered with great fanfare in October. Although superb cross country machines and fully amphibious (the latter capability not greatly in demand in land-locked Afghanistan), they do not even begin to compare with the Warrior, much less a Challenger II. As a result, not only did the Marines take casualties yesterday - they also failed to achieve their objectives.

In order to win, I wrote in an earlier post, we must first stop losing. And the first thing in this context we must do is ensure that our own casualties are minimised. The number of deaths might be minuscule compared with the First and Second World Wars, and even Korea, but such is the sensitivity of this issue that even a few hundred deaths might create a political head of steam which forces our withdrawal from active theatres. 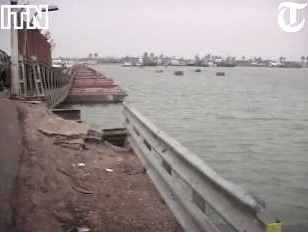 No one is naïve enough to believe that we can fight wars without taking casualties but, what we suggested in earlier pieces (here, here and here) is that the tolerance is lower when the war is unpopular and deaths are seen as unnecessary. Too many of the deaths we have recorded over term seem definitely to come into the "unnecessary" category - not least those arising from the recent attack on the boat using the Shatt al-Arab waterway. Thus we are seeing headlines announcing that troops have been killed, when we need to see more in the manner of the title of this piece, "two soldiers lightly hurt".

Yet, instead of striving for such headlines, this government seems to be going out of its way to prosecute its wars in a way which will ensure that the unnecessary deaths continue. In many respects, we are but one military disaster away from total failure and the government seems to be behaving as if it actually wants failure. Can this really be incompetence?

Mulling over this, I happened today on a piece from the North West Evening Mail which recounted the experiences of "Barrow soldier" Lance Corporal James Larsen, recently returned from Basra after serving with the 2nd Battalion of the Duke of Lancaster's Regiment. While based at the Shatt al-Arab Hotel, he claims to have survived more than 1,000 bomb attacks on his base and had been just 70 metres from a colleague who was killed by a mortar bomb. He adds:

We were already aware of the situation at the other main base within the city limits, Basra Palace, which even this week was attacked again with Katyusha rockets. Larsen's experience confirms that Shatt al-Arab Hotel is also under continuous attack. 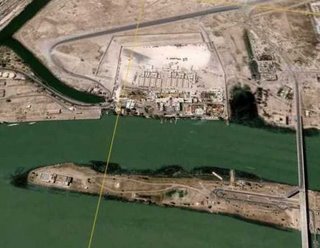 Yet, although both bases are defensible and, as we pointed out, a range of technology and weaponary exists to counter mortar and rocket attacks, there seems to be a wilful refusal on the part of the British government to provide the wherewithal for defensive action. Contrary to American practice, where helicopters are often scrambled and even British practice in Afghanistan, where Harrier jets have been despatched to seek out mortars, the British military in Iraq seem to take an entirely passive line on such attacks.

What must be done?

The Iraq Study Group Report, out today, tells us: "The situation in Iraq is grave and deteriorating". It adds that, "There is no path that can guarantee success, but the prospects can be improved".

The presence of the military can only be sustained if casualties are kept down. We have no idea what the tipping point might be, which might trigger a political crisis, but it must make sense to take every technically achievable step necessary to increase force protection. We need to see substantial improvements in base protection and in the protection of mobile forces. And then, in the context of a more aggressive approach to attackers, our forces must have the capability to take the battle to the attackers, responding to them with lethal force when they dare to attempt killing our men and women.

But, gradually, that writ must also extend to all the security forces. As in Northern Ireland, where a primary task of the Army was to protect the civilian police, we must ensure that co-operating with the occupying powers is not a death sentence - as it so often is at the moment.

Furthermore, what applies to Iraq must also, to a very great extent, apply to Afghanistan. There, the Taliban has been quite explicit. It aims to kill our people and Nato troops in general, to break our will. In that sense, the currency of this dispute, there as in Iraq, is the lives of our soldiers. Keeping them alive, in theatre while they are actively carrying out their protective roles, is itself a victory. It sends a message to the terrorists that they cannot win.