Time to call a halt 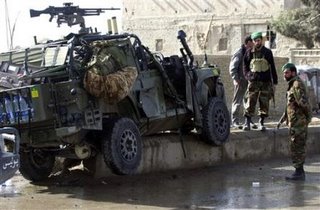 It has been known for some time that Taliban tactics are changing, with this blog reporting just over a week ago that they intended to resort to laying mines as a tactic to demoralise troops.

But it was also the case that they were going to be targeting troops with suicide bombs with the aim of killing as many soldiers as possible, to put pressure on the Nato governments.

And yesterday we perhaps saw another result of that tactic, a British Land Rover, part of a military convoy, damaged by a suicide car bomb in Kandahar, south Afghanistan. Three Royal Marines have been injured, one seriously. The other two are in a stable condition. 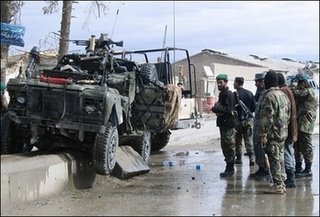 One thing is for certain, looking at the relatively modest damage to the vehicle, had the troops been riding in an RG-31, they would not even have had a headache. They might even have survived uninjured in a Snatch Land Rover – with its basic armour - but this is not even an armoured Land Rover.

It is a "wolf" version, stripped down and fitted with roll cages and weapons mounts – the so-called Weapons Mount Installation Kit (or "Wimik"). Fully equipped, it looks a macho machine in the style of David Stirling's World War II SAS jeeps. But it has no place as a convoy escort in Kandahar, where the suicide bomb is a known and potent enemy tactic and where, in the same town, two Canadian soldiers were killed in a suicide car bombing last week. 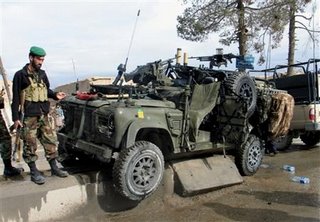 Maybe yesterday, the three marines were "lucky" that they were just injured although, at least eight people other people were killed. According to Reuters, three civilians died when the bomber struck and five more were shot by troops afterwards.

As these appear to have been civilians, Nato spokesman Major Luke Knittig had said that the alliance will "establish the facts". But one fact is certain – deploying British troops in unarmoured vehicles in urban areas is too dangerous, exposing them to unnecessary risks. It is time to call a halt on this practice.