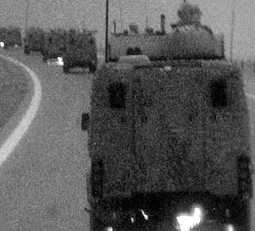 When the news started coming in yesterday about the raid by coalition forces in Basra, details were sparse and I thought it better to wait until we knew more.

A day later and we are not much the wiser. The whole of the publicity seems to have been generated, and is therefore controlled, by the Army. We know what the Army wishes us to know – no more and no less.

One should not be too churlish I suppose. If the Army is to be believed, five "terrorist leaders" were captured, together with a quantity of arms and explosives and some documents of "intelligence value". However, that does seem somewhat small compensation for a raid described as the biggest military operation since the end of the war on 1 May 2003. 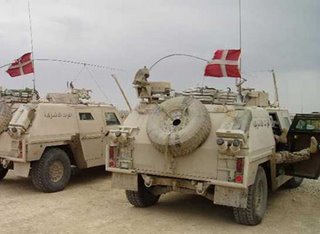 Altogether, over 1000 men took part, including a 250-strong Danish contingent, deploying 14 Challenger II MBTs, 28 Warriors, an unknown number of light armoured vehicles ("Snatch" Land Rovers and Danish MOWAG "Eagles", based on the Humve chassis - illustrated right) and ten assault boats. In support were USAF F-15s which carried out overflights as a diversion and "a show of force".

Mercifully, unlike the 24 November raid, no one was killed. That alone may have justified the scale of the force, which was not unopposed.

But if the size of the force deployed was not excessive (under the circumstances), there was certainly something so gloriously OTT about the Telegraph coverage. It not only included a huge map, occupying the best part of half a page, but was announced by a headline spanning two pages reading: "'Armoured fist' smashes into Basra at dawn, capturing five terrorist leaders." One suspects that the writer (our old friend Thomas Harding) and the editorial team harbour secret ambitions of being comic-strip writers. 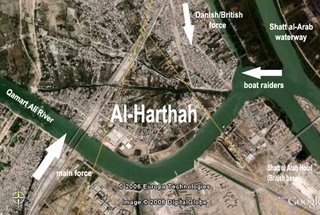 Behind the MoD-supplied details (and photographs), the problem is, as always, that the newspaper presents a breathless view of events which avoids any depth, understanding or analysis. This is not what one would expect from grown-up journalists.

Any such analysis, of course, would not necessarily accompany this piece – and we learnt not from this but from the BBC that one of the objectives of the raid was to deal with "criminals" who were mounting attacks on British bases. Interestingly, the Telegraph's location map miss-positions the Shatt al-Arab Hotel base. It shows it closer to Basra Palace than anywhere, rather than its correct place – well within mortar range of al Harthah. And, as recently as Wednesday, the base was at the receiving end of yet another mortar attack. Was al Harthah the source? 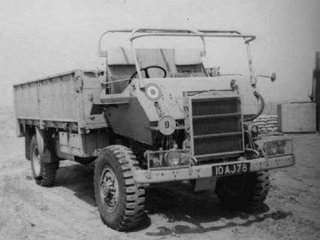 So, here we go again. In June we wrote a piece noting that we have been here before. We remarked on how between 1972 and 1980, mine protection technology emerged, which has been refined and developed as the basis of today's blast-protected vehicles.

But, if the colonials were there before, we were there even before that. A remarkable website shows that in Oman between 1970 and 1973, British forces were operating modified 4-tonners with armour plate fitted to deflect blast from mine strikes.

But even more fascinating is the website of Barry Dunning recounting his exploits in the 10th Royal Hussars (Middle East Land Forces) in Aden in 1965, riding in a Saladin armoured car. 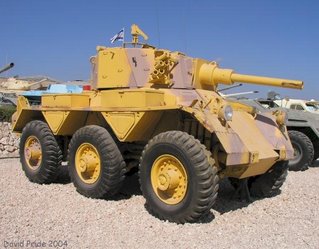 As a boy I recall this vehicle (illustrated). Built on the same chassis as the Saracen armoured personnel carrier, it was specifically designed for mine protection and could continue operating with any one wheel blown off by a mine. For their party trick, Alvis, the manufacturers, used to drive the vehicle round a test track on demonstrations, with one of the front wheels missing.

The 12th of September is a day I will never forget!! Coming back from Dhala we went on ahead to pick up the Infantry whom were up on the ridges (to cover the convoy through the wadi). We had just passed Mile Stone 36 when we hit two anti-tank mines and 25lb of plastic explosives. It picked the 14 tons of armoured car and threw us about 25 feet into the air, leaving a crater 30 foot wide and 10 foot deep. We were very lucky the armour did not split open as we were fully loaded with all our shells and bullets... It would have been a real fireworks display if they had gone off, and we were lucky no one was hurt. 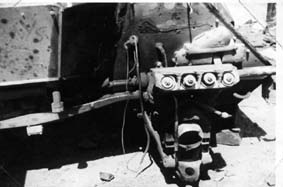 Mick had a cut on his cheek where the Browning rounds wrapped around his face. Geordie hit his face on the front driver hatch as he was thrown forwards. It knocked him silly for a moment and he had a bloody nose. Because of the shock the medics could not take any chances with us so they flew us out on an Army Scout helicopter back to camp. The Saladin was brought back on a low loader.

And above right is a close-up picture of the front wheel bay, which took the full force of the explosion. Now imagine if that had been a "Snatch" Land Rover. 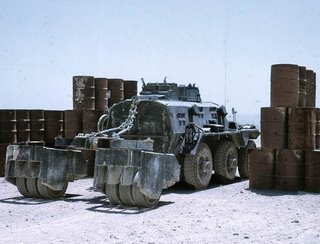 As relevant to the predicament of our troops in Basra, however, are the experiences of British forces attached to the Sultan of Oman's army in 1970. Amongst other things we see in another fascinating website is a Saracen APC pressed into duty as a mine clearance vehicle at RAF Salalah. One feature of this vehicle is that it could be driven easily in reverse, a feature used in the illustration, where it is rigged to push a mine roller. Interestingly, we also see sand-filled 40-gallon drums stacked up as blast protection – the predecessor to the "Hesco" containers currently used. There is nothing new under the sun. 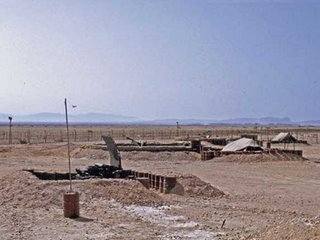 Just as relevant though was that the base came under continuous mortar attack. To counter this threat we see the predecessor of the current Mamba and Cobra counter battery sets – the "Green Archer" counter mortar radar in place (in the foreground). Behind the radar is a 25-pounder in a gun pit, ready to return fire once the mortar location has been identified.

But it did not stop there. Out on the tarmac were pairs of Strikemaster light jets, aircraft based on the then RAF basic trainer, the Jet Provost. Despite their provenance as trainers, these were formidable ground attack aircraft and were, in the hands of their RAF pilots, potent weapons.

And, of course, there were the helicopters, also on quick alert ready to transport Omani Scouts to a trouble spot and deal with the insurgents - yes insurgents - who were seeking to overthrow the government. 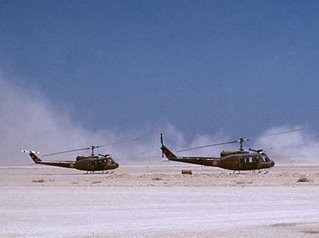 These, being the Omani's choice - and free from the strictures of the RAF and the then MoD (which hardly seems to have changed) were Bell UH1Ds, the famous "Hueys" of VietNam fame. Now, of course, the RAF has a few, in the form of the Augusta Bell 412, but only for air-sea rescue in Cyprus and for training aircrew. But the Army is not allowed to have them.

There we have it. Over thirty years ago, nearly all the elements of COIN warfare were in place, right down to the mine/blast protected vehicles, which are now no longer on charge. In many respects, therefore - with our inadequate "Snatch" Land Rovers instead of the Saracens (which were also used in Northern Ireland), the absence of light (or any) ground attack capability and an acute shortage of helicopters - we are less well equipped than were our own and even the Omani armies all those years ago. 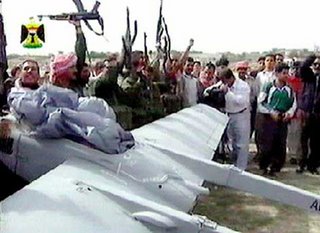 But there another major difference. Unlike Oman with its wide-open spaces (more like Afghanistan in some respects), weapons like mortars and Katyushas are being fired from highly congested urban areas, with the terrorists using civilians as a screen.

To deal with that, we have other weapons - the C-RAM (and even that is based on 70s technology) and UAVs armed with precision, small-warhead guided weapons. We have no C-RAM though and, as to our UAVs, we have none capable of being used for this function and our attempts at flying off the wrongly-named Phoenix (it does not rise from the ashes) have met with embarassing failure (illustrated above). 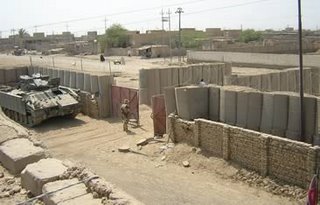 For want of the right equipment, therefore, it seems we must send a 1000 men, backed by tanks, armoured vehicles and aircraft smashing into Basra at dawn, all to arrest five men, before scuttling back to our fortifed bases and the daily barrage of mortars and rockets.

Oddly, Gateway Pundit on Friday hailed as "good news" the optimistic account of the situation in Basra by Iraqi-American Haider Ajina, citing Major General Ali Hamadi chairman of the tri-security agencies in Basra. He claims that operation Sinbad, for security and reconstruction, has achieved important results.

Yeah right. That's why we need a small army to arrest five men, while all our bases are under constant daily attack. Yet, in June 2003, our troops were walking the streets in soft hats. Every which way, in my book, we're going backwards.