A stampede of elephants 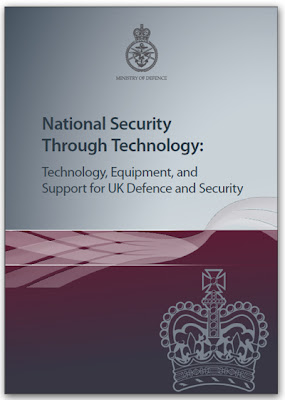 You would have thought that, given the huge number of column inches devoted to the diverse and expensive defence procurement failures, the MSM might be interested in this government's proposals for remedying the system, delivered on Wednesday in the form of a White Paper.

The official announcement on the MoD Website makes the ostensible agenda interesting enough, telling us that the "Government" has set out its plans to prioritise investment in Science and Technology, "in order to ensure the UK's Armed Forces continue to have state-of-the-art technology, equipment and support, in a White Paper published today".

Apart from the Financial Times, however (and a small, down-page item in the business section of The Times), the MSM apparently no longer feels the need to comment on such matters – possibly because there is no opportunity any longer to make party political mischief and get a "biff-bam" slanging match going.

As to the Financial Times, it picks on one issue, which is also the focus of much of the specialist press, headlining: "MoD will no longer favour UK companies". The Ministry of Defence, it tells us:


… will no longer give UK companies priority over their foreign competitors when buying equipment and weapons for the armed forces. The only exceptions will be cases where buying British is essential to maintaining national security, Peter Luff, the defence procurement minister, said in an interview. He made clear the MoD would not consider wider employment or industrial economic factors when it assessed whether a piece of equipment offered value for money.

Nevertheless, if the dailies largely ignore that issue, The Spectator gives a spot to Matt Cavanagh, who calls the White Paper the waste of another opportunity. We need clear and unapologetic government backing for a sector which, as the White Paper notes, employs 300,000 people and is a major player in a global market valued at £260 billion, says Cavanagh, adding:


In that respect, the timing of the White Paper could hardly have been worse. Yesterday brought the bad news that India has awarded preferred bidder status for its $10 billion-plus fighter contract to France's Rafale, in preference to the Eurofighter Typhoon in which Britain's BAE has a major stake. The White Paper makes the usual noises about ministers "doing their utmost" to support exports, but privately many in the industry are disappointed by the lack of help — especially given ministerial rhetoric in 2010 around reshaping our foreign policy around trade.

This long-awaited White Paper was a second chance for the government to demonstrate its seriousness about tackling the real problems in defence procurement. Instead we got feeble commitments of support and simplistic rhetoric about "buying off the shelf" in a hypothetical "open market" which, in relation to large defence equipment programmes, simply doesn't exist. Another opportunity wasted — for Defence, and for one of our better prospects for export-led growth.

But what Matt – and everybody else for that matter – is ignoring is not so much the elephant in the room, as a virtual stampede of elephants. These come in the guise of EU Directive 2009/81/EC "on the coordination of procedures for the award of certain works contracts, supply contracts and service contracts by contracting authorities or entities in the fields of defence and security, and amending Directives 2004/17/EC and 2004/18/EC".

To get a taste of what this is requiring, all we have to do is look at the recitals – two, three and four will suffice:


(2) The gradual establishment of a European defence equipment market is essential for strengthening the European Defence Technological and Industrial Base and developing the military capabilities required to implement the European Security and Defence Policy.

(3) Member States agree on the need to foster, develop and sustain a European Defence Technological and Industrial Base that is capability driven, competent and competitive. In order to achieve this objective, Member States may use different tools, in conformity with Community law, aiming at a truly European defence equipment market and a level playing field at both European and global levels.

They should also contribute to the in-depth development of the diversity of the European defence-related supplier base, in particular by supporting the involvement of small and medium-sized enterprises (SMEs) and non-traditional suppliers in the European Defence Technological and Industrial Base, fostering industrial cooperation and promoting efficient and responsive lower tier suppliers. In this context, they should take into account the Commission’s Interpretative Communication of 7 December 2006 on the application of Article 296 of the Treaty in the field of defence procurement and the Commission Communication of 5 December 2007 on a Strategy for a stronger and more competitive European defence industry.

(4) One prerequisite for the creation of a European defence equipment market is the establishment of an appropriate legislative framework. In the field of procurement, this involves the coordination of procedures for the award of contracts to meet the security requirements of Member States and the obligations arising from the Treaty.

Helpfully, albeit in an obscure footnote, the White Paper tells us that this Directive was brought into UK law as the Defence and Security Public Contracts Regulations on 21 August 2011. And thus, let's play "spot the difference". In that self-same White Paper, we learn that:


We are focused on ensuring best value-for-money and delivering the best equipment for the Armed Forces and the security services. That is why this paper sets out how we will use competition as our default position and why we will look at the domestic and global defence and security market for products that are proven, that are reliable, and that meet our current needs. This principle is, though, qualified by the need to take action to protect our technological advantage where essential for national security.

We believe that the best way for the UK defence and security industries to remain strong, with some of the most high-tech and advanced manufacturing facilities in the world, is to be competitive. That is why this Government will continue to support responsible defence and security exports; why we are helping to create the right conditions for companies in these sectors to invest in the UK, and why we will take significant steps to ensure small and medium sized companies can continue to deliver the innovation and flexibility we need. There was strong support for these actions in the consultation responses.

And so we get:


Wherever possible, we will seek to fulfil the UK's defence and security requirements through open competition in the domestic and global market, buying off-the-shelf where appropriate… we will also take action to protect the UK's operational advantages and freedom of action, but only where this is essential for our national security.

This is remarked upon by a trade journal, which remarks that the presumption is to buy on the basis of competition and best value, which may often mean "off the shelf", even if it's from manufacturers in France, the US, Argentina, Israel. Now, the journal observes:


… many procurement people would welcome this focus on value for money rather than preserving British jobs or capability, but it will be interesting to see whether this holds up the first time a UK manufacturer loses out and screams blue murder about jobs, national interest and so on. Look at the fuss about the Bombardier/Siemens train procurement, and that didn't have the emotive aspects that defence always carries.

But of course, it will hold up. British ministers are implementing EU law, and they are always going to obey their masters. And in this White Paper, they are providing an ex post facto explanation of how the procurement system is to be adapted in order to ensure absolute obedience.

This in governmental terms, is not a "wasted opportunity" as Cavanagh would aver. It is simply a statement of compliance, the sub-text, "we shall obey".