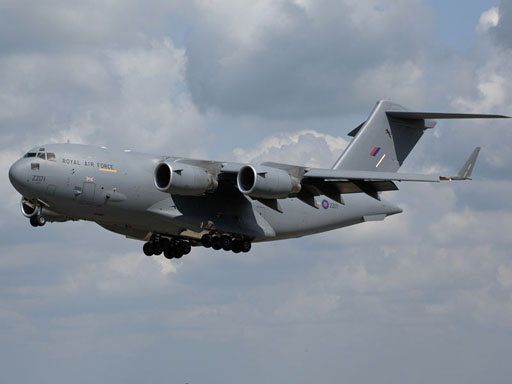 The British administration is to purchase for the RAF another Boeing C-17 strategic transport aircraft (pictured above), bringing the total to eight – two less than the Indian Air Force fleet.

This £200 million purchase is reported in The Independent, having been announced by no lesser a personage than David Cameron himself at PMQs. Such grand issues of state, such as the purchase of one transport aircraft, can no longer, it seems, be left to the defence secretary.

The announcement came after a challenge over today's Defence Select Committee report which warned that Britain could struggle to mount an operation on the scale of the Libya mission in the future, such has been the scale of recent defence cuts.

Unchallenged, however, Cameron is allowed to propagandise freely, telling the Commons that, "Because the Ministry of Defence's finances are better run and better managed, and because we have found savings, we will be able to purchase an additional C-17 for the RAF". "This aircraft is becoming an absolutely brilliant workhorse for the RAF in terms of bringing men and material into a war zone like Afghanistan, but also evacuating civilians in times of need", he says.

What is not said, of course, is that the real reason for the purchase is to a desperate attempt to fill the huge gap left by the failure of the £2.7 billion Airbus A-400M programme, which was supposed to have delivered 25 of their shiny new military transports to the RAF by 2006, with an in-service date of 2007.

When the programme hit multiple snags – some of which have yet to be resolved – the delivery date was moved to 2011, and the RAF's ageing fleet of C-130Ks was given a refit at the cost of £15.3 million, in order to fill the gap.

However, still further problems with the A-400M mean that we will be lucky to see deliveries of the A-400M (now down to 22) by 2014, with an expected (if optimistic) in-service date by 2015. Meanwhile, wing fatigue have required four of the remaining 14-strong C-130K fleet to be retired last year, with the rest due to be scrapped this year.

Furthermore, some of the newer 24-strong C-130J fleet have been hammered so badly, from service in Afghanistan, that they are showing signs of premature ageing and will require wing replacement work, starting this year and taking an unspecified number of machines out of service.

All of this means that, as the National Audit Office reported last year, the RAF would be "unlikely to be able to sustain the current tactical capability". In less measured language, the RAF is now dangerously short of airlift capacity.

So bad is the situation that, this January, an announcement was sneaked out that the MoD was to buy two second-hand BAe 146s to supplement its air transport activities in Afghanistan – the possibility of which we reported in 2009, when 47 were available for purchase.

The addition of one C-17 still hardly scratches the surface, and is hardly a proper occasion for a triumphal announcement by a prime minister – affordable only because of the "savings" arising from the run-down of the transport fleet and the delay in buying the A-400Ms.

At the heart of this, though, is the political decision by the previous (John Major's) administration to take part in the European programme, and Blair's decision in May 2000 formally to order the machines. But never let it be said that we get the whole story from the MSM or the MoD. By their silence, a procurement disaster of the past becomes today's triumph.