A War of Choice 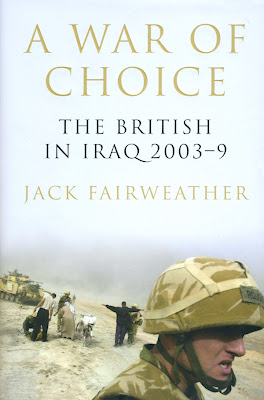 Hailed by its publishers as the first book on Britain's occupation of Iraq during 2003-2009, this of course is by no means the first. That accolade goes to Ministry of Defeat, published in 2009 - see below right ... note the similarities in the subtitles. But, as author of that book, I must be very careful in criticising what might be seen as a rival product - although it isn't. This is a very different book.

What one must realise with Fairweather's book is that it was written with the broad approval of the MoD, which gave him access to many of the characters he interviews. And therein lies its strength. It gives what appears to be a very accurate account of how a segment of the establishment - diplomatic and military - saw the occupation, and their role in it.

Unfortunately, that is also its great weakness. This account is hardly dispassionate and it is certainly not accurate. It represents a highly partisan attempt of that segment of the establishment to cover their backs and mitigate their own failures.

The narrative itself is confusing, as it darts about all over the place - to areas outside the British zone of control, and even to Afghanistan, and the attempts at characterisation verge on comedic. We have "ruggedly handsome" Brits, and the like ... and even a "wily" Arab.

And clearly, technical details are not Fairweather's strong point. He is a people person, and his knowledge of kit and the technology of war is slight ... indicated by a large number of unforced errors, and unfortunate phrasing. Since when did a Predator "hover" over battlefields, and when did a "Spectre" gunship have a 105mm cannon "slung beneath it".

Such errors, however, pale into insignificance compared with his uncritical acceptance of the myth that EFPs (which he manages to describe without naming - unhelpful when you are looking for them in the extremely poor index) were made in Iran, despite the very substantial evidence that al Amarah was a major bomb factory, with scores of incomplete EFPs being found there when the city was recovered. 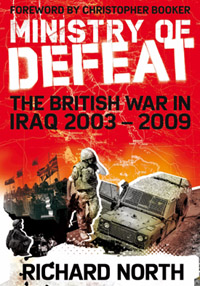 Therein lies the essential weakness of the book. Fairweather is not a historian or a professional researcher. He is a journalist from the "he says, she says" school, and as long as he has talking heads to back up his assertions, that is sufficient. The idea of triangulation, or using documentary evidence, does not seem to occur to this writer, making his narrative a compilation of uncorroborated sources, the veracity of which we have no means of knowing.

Add to that some huge omissions - how can you not even mention Operation "Promise of Peace" in an account of the occupation, when this set the seal on the British occupation?

All that said, however, Fairweather adds detail that isn't generally known, and if you already know enough about the campaign to be able to sort the wheat from the chaff, then the accurate detail he offers is illustrative and useful. But if you want a book to tell you what went on in British sector of Iraq during 2003-2009, this isn't it.