Courage is not enough 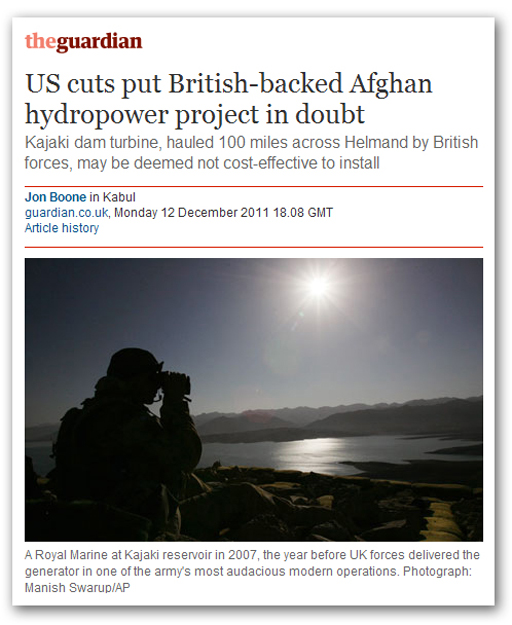 We last looked at the ill-fated Kajaki Dam project in June last, when we concluded that it was a complete waste of time, money, effort – and lives. And, to reaffirm that, the latest report in The Guardian tells us that, owing to "cuts" in the US government's Afghanistan development programme, it is unlikely that the project will ever be finished.

No one will dispute that the military operation in September 2008 operation was not an epic adventure, "sneaking" the heavy machinery needed to upgrade the generating capacity across 100 miles of hostile territory in northern Helmand. At the time, it was acclaimed by the British army as one the most daring operations of its kind since the Second World War.

Yet, if the final outcome is that nothing changes, all the derring-do, the skill in planning and execution, have been wasted as well. We would have saved out time and money, and the world would have gone on just as before.

It is not therefore – as some will aver – cynical to question the wisdom of military operations. However good they may be at field tactics (and that is variable), the military is notoriously bad at taking in the bigger picture, and assessing the overall value of its own input. The famed "can do" attitude of the military, therefore, is as capable of getting it into trouble, as it is of extracting politicians from their own messes.

And here, in Kajaki, the project was always doomed. Not is it a question of money – this is just the figleaf. The Americans are perfectly justified in not throwing good money after bad.

Not least of the problems, and one that is effectively insoluble, is the remote location of the generating facility. This, as Booker remarked in 2009, meant that we were unable to secure the transmission lines, thus allowing the Taliban to control the distribution of the electricity, charging to maintain the supply and thus topping up their coffers at the expense of British and (latterly) US taxpayers.

At the time we produced that article, we took a lot of flak for our pessimism, also being accused of denigrating the bravery and skill of our military. But, as it transpires, the military and its supporters were being unrealistically optimistic. Unfortunately, as is now all too evident, courage is not enough.

The worst of it all is that, for want of the capacity not being supplied from Kajaki, electricity is being supplied by the Americans from hugely expensive diesel generator sets. Even if these are left when the Americans depart, it is unlikely that the Afghan government will be able to afford to run them. Electricity supply, therefore, will very quickly deteriorate.

And here we see something of a double-whammy. The absurd sums of money, spent on the pitifully small increase in capacity from Kajaki, could have been far better spent on alternative schemes.

Given that Afghanistan has huge reserves of high quality coal, and a plentiful supply of cheap labour, the most logical provision would have been low-tech, coal-fired generator sets, near the points of consumption, such as Kandahar, thereby minimising transmission distances and increasing security of supply.

But with British and US aid dominated by climate change luvvies, the idea of subsidising coal-fired stations in Afghanistan has been vetoed (a real veto), even though we are apparently happy to pay for similar facilities in India, Pakistan and South Africa.

The courage of our military, therefore, has been completely negated by poor policy-making and, latterly, by climate-change warriors, who demand danger money and full-time armed guards just to venture into the Afghan hinterland, where they can wreak their peculiar form of damage.

Looking at this debacle in the round, one can only despair. Sometimes, we think, the military has its weapons pointed the wrong way. The real enemy – the one that does by far the greatest damage – lies not in the hills of Kajaki but in the offices of Whitehall, where the more deadly battle is being fought out.