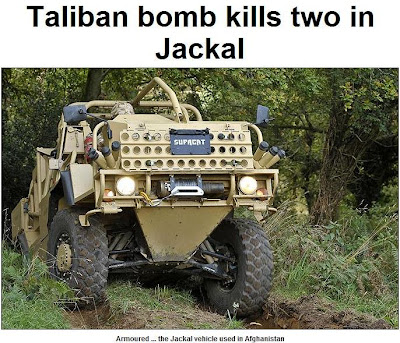 The Taliban have taken out a Jackal, killing two soldiers. Far from being critical, however, The Sun acts as a free propaganda sheet for the MoD, calling in aid Major Chris Hunter, ex Army bomb disposal "expert".

The Jackal is so much better than its predecessor, the Snatch Land Rover, says Major Hunter, immediately demonstrating that, while he may be a bomb disposal expert, he certainly ain't a vehicle expert. The predecessor to the Jackal was the WIMIK Land Rover. The Snatch was supposed to be replaced by the Vector – another brilliant choice from those Army geniuses.

But hey, this is The Sun after all, so we get Hunter giving us a Janet and John lecture, telling us that, with combat vehicles there is always a trade-off:


You have to balance firepower, mobility and protection and the result is a compromise. When you increase the vehicle's capability in one area, you have to surrender it in another. More armour means less speed and less manoeuvrability.

As you can see, 50 years and more of expertise on vehicle mine protection, the theory and practice, is ignored. But what do you expect of a British Army Major? 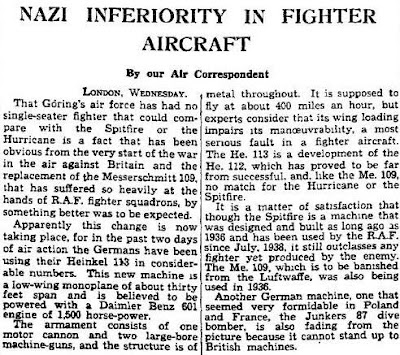 Anyhow, this is a good opportunity to remind ourselves that very little you read in the newspapers can be trusted. Feast your eyes on the above, as the Guardian Air Correspondent tells us that the "new" Heinkel 113 is inferior to the Spitfire and Hurricane.

And indeed it is, for one very simple reason – it does not exist. It is a spoof, a propaganda stunt pulled by the Germans. Soon enough though, we had RAF pilots swearing that they had shot down He 113s, with "kills" studiously recorded by intelligence officers and entered in the official record.

Now, in the great tradition of the wartime Guardian, we have David Willetts, Defence Correspondent of The Sun, fronting a piece telling us what a brilliant truck the Jackal is. You can always rely on The Sun - they will tell you how it really is.